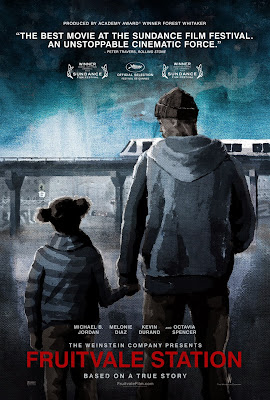 What’s the value of a young African-American? The question has been repeatedly asked many times in movies, although the answer has been never settled. Ryan Coogler’s “Fruitvale Station” (2013) once again poses the same inquiry using a fly-on-the-wall approach and without getting preachy. As a film student, Coogler started writing the script for this movie. He mixes aesthetical sensibilities and inerrant ethical stance into the life of Oscar Grant, an unarmed 22 year old African-American, who was shot and killed by a transit policeman in Fruitvale Station, Oakland. This detailed somber urban drama won big awards in Sundance and Cannes Film Festivals.

On New Year’s Day 2009, in Bay Area Rapid Transit stop, Officer Johannes Mehserle, pulled out his gun, believing he had taken his taser, shot it at the back of cuffed and prone Oscar Grant.  The officer served 11 months on the charge of involuntary manslaughter. The incident was captured by many in the station on cell phones. This chaotic incident later went viral and provoked community and international outrage. The film starts with the actual footage of events, which ends with a sharp sound of the bullet and an anguished cry from witnesses. Oscar Grant (Michael B. Jordan) is not a model citizen. He has served time in prison for selling drugs. He is casually adrift and dreams about getting his act together. The film only chronicles the last 24 hours of Oscar’s life, in which he is trying to get a legitimate job. His girlfriend Sophina (Melonie Diaz), lovely 5 year old daughter Tatiana (Ariana Neal) and the sorely exhausted mother, Wanda (Octavia Spencer) are the ones who can lift up his moral with even an impish smile. 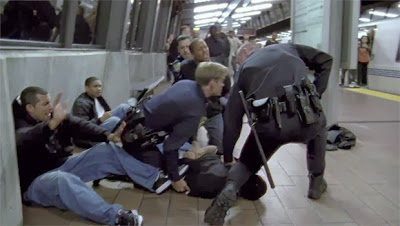 Oscar tries to persuade his old supermarket boss to rehire him. But the guy coldly explains he has hired somebody else. He later calls his old friend to sell the old stash of drugs. However, at the last minute, he changes his mind and drops the stash into the sea. Later, he picks up his girlfriend and daughter to celebrate his mother’s birthday. Then late at night, the couple gets out with friends to watch the fireworks. Oscar listens to his mother’s words to take the train rather than car, since both of them were drinking. Slowly the night surges toward the moment on platform, where the grander hopes of a young man were cut out.

Coogler, in 2011, approached Academy Award winning actor Forest Whitaker with an idea for this story. Whitaker took over the project immediately and the film was made under a million dollars. The director has not just dramatized the life of Oscar to make him an over-idealized protagonist. He introduces a human being (dangerously impulsive as well as warm and tender) to the viewer, not reiterates the headlines of American media. The mobile phone showed the atrocity to the world, so, Coogler user cell phone to frame different elements of Oscar’s life. The display of texts and phone calls punctuates the little natural proceedings that play a big role in his death. Snap decision to ditch the drugs and encountering an injured stray dog seems like over-dramatized events, but those occurrences adds an undercurrent of inescapable sadness to the final outcome. 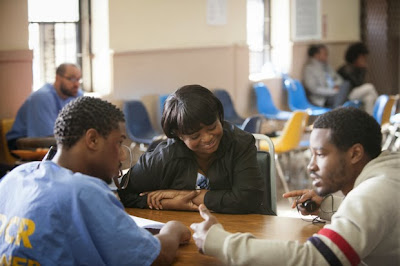 The flashback scene, where she visits Oscar in prison is one of the film’s most well acted and honest scenes. A moment she sits talking with her solicitous son, the next moment, things turn volatile and he is exchanging profanities with a foe. That scene shows the wounded feelings of a mother watching her incarcerated love and also points out the character nature of Oscar. Michael B. Jordan serves the impossibly flawed, complicated character very well. With a dazzling smile Jordan glides us through Oscar’s life with complete assurance. Melonie Diaz brings out the sharp edges of a young woman, who patiently for her man to catch-up. Octavia Spencer, with her big eyes and commanding voice gives a solid performance as the mother.

Coogler, himself is a young African-American (living in Oakland), so it could have been easier to take the documentary route. That way, he could have repeatedly highlighted the appalling circumstances of Oscar's death. However, he chooses independent cinema to explore the essence of American life for the blacks and certainly brings out with a dazzling distinction. “Fruitvale Station” is eventually is a character study of a man and his gloomy atmosphere, like that of 70’s Cassavetes or Scorsese films--  where the circumstances teases a morally wounded man with more aggression. Coogler’s handheld camera brings a roughness to the proceedings. The little pauses in his script haunt us with the moment of unemphatic sweetness and shock. 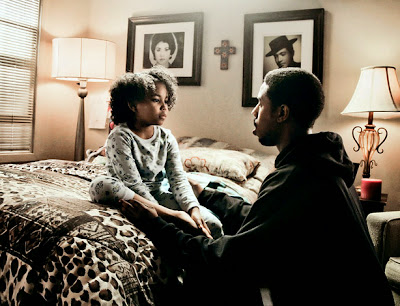 “Fruitvale Station” (85 mins.) is one of the best Independent movies of 2013. It can spark discussions on topics which are continuing to lurk in the cultural background of America. This compelling homegrown tale should be seen as a cruel act committed to human being no matter what the person's gender, party association, religion or race might be.

Rated R for some violence and language throughout
at December 20, 2013
Email ThisBlogThis!Share to TwitterShare to FacebookShare to Pinterest
Labels: American Indie Films, Based on True Story, Social Drama