Penned by trio of screenwriters (Muhsin Parari, Sharfu & Suhas), Aashiq Abu’s Virus (2019) is a star-studded medical thriller that approaches the threat of a deadly epidemic disease from interestingly different perspectives, smartly avoiding the typical dramatics. Virus is based on May 2018 Kerala Nipah virus outbreak (in Kozhikode and Malappuram districts), which claimed 17 lives and the virus’ origin was traced to the fruit bats in the area. The narrative closely follows the painful losses while also acknowledging the sacrifice, compassion, professional integrity and intellect of the disparate set of individuals that proved to be crucial in containing the epidemic. Striking the right emotional chords and clinically observing the machinations of bureaucratic processes is not an easy task. But director Aashiq Abu does a commendable job, keeping our attention focused on the real, collective heroes adorned with a sense of dogged professionalism.

Being an ensemble piece, Virus takes time setting its characters and atmosphere. A junior doctor of Kozhikode named Abid Rahman (Sreenath Bhasi) starts his shift; he and his colleagues are all involved in bringing some order to the chaos of emergency unit. A stretcher brings in an extremely agitated and delirious woman named Akhila (Rima Kallingal) who being a nurse herself insists she tested negative for dengue fever and that she’s afflicted by something more dangerous. Abid reassures her and gives her the proper medical attention. Soon patients with similar symptoms turn up in Kozhikode hospitals, suddenly turning the situation into a full-blown emergency. Kozhikode District Collector Paul Abraham (Tovino Thomas) and Kerala Health Minister Prameela (Revathi) gather health officials and hospital orderlies to figure out the methods to curb the spread of disease, and also to figure out the virus’ source. 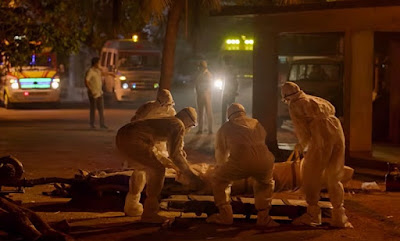 The doctors assert that the patients have contracted Nipah, for which there’s neither vaccination nor treatment, and the fatality rate is nearly 75 percent. The government quickly jumps into action asking the people to remain in the confines of their home and quarantining the reported patients. Dr. Suresh (Kunchacko Boban) and Dr. Annu (Parvathy) separately conduct their inquiries to trace down the ‘index’ patient Zakariya and the possible ways the spread of the virus occurred. Meanwhile, conspiracies theories emerge as the paranoia surrounding viral outbreak make some officials to think of weaponized attack or bio-terrorism. And through all this thrilling yet incredibly realistic elements, director Abu also poignantly looks at the plight of the patients and their loved ones.

Virus deals with a fresh and intriguing subject, not previously covered in Indian cinema. It’s depiction of an emergency medical crisis (with strong grounding in real science and true events) is deeply unsettling and frightful at times. Wolfgang Peterson’s Outbreak (1995) and Steven Soderbergh’s Contagion (2011) have previously worked with such vast canvas, tracking down a similar primitive and more complex antagonist. Apart from the loud background score and few redundant subplots, ‘Virus’ is made with meticulous precision. In movies with such a large ensemble cast and one where such a large, intricate story is detailed, individual characters would get lost and fail to create considerable emotional impact although the viewer’s intellect would be consistently engaged. Here, the writers have done a brilliant job, instilling more depth to certain characters while also ratcheting up the tensions. Characters like Anjali (Darshana Rajendran)-Vishnu (Asif Ali) and Abid-Sara (Madonna Sebastian) come across as somewhat one-dimensional even though we feel for the tragedies they encounter. 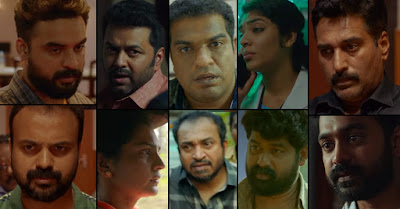 The social aspects of the outbreak are well addressed through the character of Babu (Joju George), an attendant at the govt. medical hospital who protests against the management for not making him a permanent employee. He agrees to his services in the quarantine ward in exchange of a promise for permanent job. The risks he took alongside the selfless ambulance drivers and sanitary workers are given due attention as much as the tiring and round-the-clock work done at the bureaucratic levels. Abu and his writers’ ability to conjure poignant yet nuanced character moments could be seen when a relieved Babu goes to shop to buy his son a new backpack; or when Akhila’s husband dejectedly looks at the fumes emerging from the crematorium (and also in the memorable, heart-wrenching epilogue). Abu deftly manages the multiple story lines and keeps it just engaging enough on a human level without relying much on melodrama. Even the final speech delivered by the health minister doesn’t go for political chest-thumping, but simply conveys the message of compassion and caring in the face of incomprehensible maladies.

Overall, Virus (152 minutes) is an impeccably written and directed ensemble piece which emphasizes on the power of human will and restraint in the midst of terrifying spread of a lethal disease.

at July 31, 2019 No comments:
Email ThisBlogThis!Share to TwitterShare to FacebookShare to Pinterest
Labels: 2019 Movies, Based on True Story, Indian Cinema, Thriller


Trapped (2015--), created by the internationally successful Icelandic director Baltasar Kormakur, was hailed as the best crime television series to come out of Iceland, joining the ranks of its great Nordic counterparts like The Killing, The Bridge, etc. The first season of Trapped was set in a snowy small-town named Siglufjordur, situated alongside a fjord. The remote town is surrounded by snow-dusted mountains on all sides, a location that’s uniquely atmospheric than the usual Reykjavik-set Iceland fictions. The other fascinating factor of Trapped is the casting of Olafur Darri Olafsson in the central police chief role, Andri Olafsson, jokingly addressed as 'grizzly bear' by his smart investigating partner, Hinrika (Ilmur Kristjansdottir). The bearded, bulky, and lumbering Olafsson, often garbed in a dark-colored parka, greatly impresses us with his ability to underplay and display of restraint. The actor is very good at making us feel his emotional torment and trauma that lurks behind Andri's stoic facade.

The second season of Trapped also centers on Andri, who has now taken a detective position in Reykjavik (capital city), having separated from his wife Agnes (Nina Dogg Filippusdottir) in the previous season. Grim circumstances, however, brings Andri back to his hometown, Siglufjordur. It all starts with an old man’s attempt to assassinate the Minister of Industries, Halla (Solveig Arnarsdottir) through self-immolation, right in front of her office at Reykjavik. The old man happens to be the minister’s twin brother, Gisli, a poor and embittered farm owner from Siglufjordur with whom Halla has broken contact years ago. 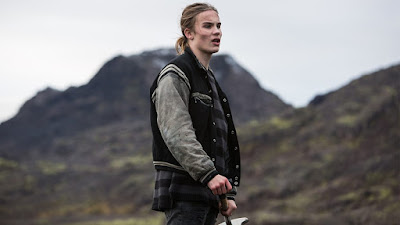 The question of motive pushes Andri towards the small town, and he carries out the investigation with his former partners Hinrika, now the police chief, and the slightly clumsy yet very lovable Asgeir (Ingvar Sigurdsson). Is Gisli involved with the extreme right-wing group called ‘Hammer of Thor’ which doesn’t want billionaire Muslims to start an aluminum plant in their town, the contract soon to be signed by Halla with the approval of town’s mayor Hafdis (Johanna Vigdis Arnardottir). Or does it have to do with Gisli’s rage over the rampant pollution caused by the already present chemical plant in the town. Or maybe, this has something to do with family dispute. Just a day into the investigation, the town is shocked by the cold-blooded murder of Gisli’s brother-in-law, Finnur, who is a top-level worker in the chemical plant.

Without giving too much away, the 2nd season of deals with themes that are very contemporary: rise of extreme right-wing, anti-immigrant attitude, economic uncertainty, increasing rift between the younger and older generations, etc. Of course, Trapped similar to any series based on a small-town also delves into darker family secrets and structures its narrative around biblical themes like sins of father (or sins of parents). Andri’s personal life as expected has moved from bad to worse. His elder, teenage daughter Thorhildur (Elva Maria Birgisdottir) has stayed back in town, under the care of her aunt, and she spends all her time with boyfriend, Aron. She’s dead set in hating her dad and avoids speaking to him. 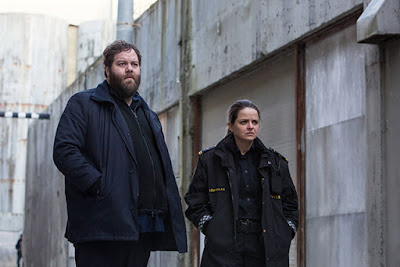 Trapped is written by a team of writers, the most interesting contribution I found in the list is that of crime novelist Yrsa Sigurdardottir (Last Rituals, My Soul to Take). I have been recently reading the crime novels of Arnaldur Indridason, Ragnar Jonasson and the literary works of Jon Kalman Stefansson and Nobel laureate Halldor Laxness. Watching Trapped I once again felt how the Icelanders meticulously turn the unimaginably beautiful yet ruthless and intimidating nature into one of their chief characters. From the last season’s blizzard to this season’s early chase of a suspect in the mountains and the final edge-of-the-seat hunt for the murderer, Trapped takes us on a journey through the distinct Icelandic landscapes. The very vastness of the atmosphere seems to contribute to the characters’ existential angst.

Some of the narrative turns presented in the second season are easily predictable, yet it keeps us guessing over who might actually be the killer and his/her primary motive. Once again the rapport shared between each characters are superbly established, particularly the friendship shared between Hinrika and Andri. Hinrika brilliantly played by Illmur is my second favorite character in the series after Andri. Although she has no children of her own, she’s like the matriarchal figure to characters exhibiting the traits of man-child.

Nordic noirs work best because it uses the crime to discuss the issues plaguing a society in many interesting ways. I mean these are some of the nations that year-after-year holds top positions in the world happiness index; where pre-meditated murders are an anomaly. But it’s interesting to perceive these countries’ deeply troubling issues from a deeply humane viewpoint.