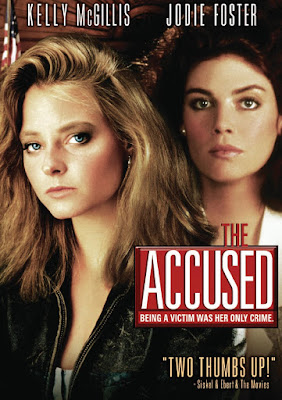 The one thing immediately strikes while watching Jonathan Kaplan’s distressing movie “The Accused” (1988) is its made-for-TV vibe. TV movies often lack the nuance and the actions are only confined to the middle of screen. The frames doesn’t digress to imbue different interpretations or subtlety but rather remains satiated to bring out its socially conscious message (in the due process, the message itself may become bland). “The Accused” tackles how rape victims are treated by the system, which often raises the question of whether the victim was a willing participant or as some would say ‘she was asking for it’—referring to the way they dressed. And as I mentioned, this isn’t a skillful or nuanced exploration, but the immediate impact the drama creates on us is hard to shake off. The reason for such an impact comes from Jodie Foster’s meticulous performance (her first Oscar winning role) and screenwriter’s (Tom Topor) approach in not blatantly demonizing the perpetrators of the crime.

“The Accused” opens with the shot of a tavern called ‘The Mill’ and gradually the bright sky fades to vicious darkness as neon sign starts flickering. A blonde girl named Sarah Tobias (Jodie Foster) comes charging out of the tavern, barefoot, screaming with tattered clothes and covered with bruises. A passerby rushes her to the hospital, while a young man reports, without revealing his identity, reports to police that a woman was raped in the premises of The Mill. In the hospital, Sarah’s injuries are excruciatingly assessed and questions are raised about her sex life before the violation. Deputy District Attorney Kathryn Murphy (Kelly McGillis) prosecuting the case is convinced that there’s not much to get a rape conviction. Sarah drinks, smokes pot, works as a waitress and lives in a trailer with a musician/drug-dealer boy friend. The defense lawyer of one of the perpetrator – a rich, college going boy – blames Sarah for dressing provocatively. In other words, Sarah’s was pictured as ‘low class bimbo’. 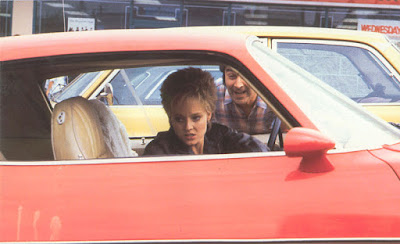 Career-oriented Kathryn Murphy believes that the Sarah’s dress or behavior in the bar isn’t an excuse enough for her to be pinned down on top of pinball machine and raped by three men, but Kathryn is also by-the-books lawyer to immediately judge that Sarah’s life style wouldn’t make her sound good on trial. So, Kathryn coerces the perpetrators’ lawyers to agree to a plea bargain, in which ‘rape’ is changed to ‘reckless endangerment’. The prison sentence for the three men is five years, although they can be out on parole in nine months. Sarah accuses Kathryn for selling her out and is tired of getting her character nature scrutinized or blamed. The attorney gradually understands Sarah’s reality and empathizes with her plight. After a hard disapproval of the district attorney, Kathryn decides to prosecute three other men, who cheered and encouraged the rape under ‘criminal solicitation’.

“The Accused” raises some challenging questions as the trial starts for criminal solicitation. The film makes clear that Sarah isn’t a very sensible woman for getting inebriated and making such dance moves in the back room of a bar, filled with few seedy men. There is a shot of a woman storming of the back room, partly in disgust, which marks the point when those men lose all their restraint. However, it also makes clear that Sarah’s naivety isn’t on trial. And, for that matter, even the perpetrators aren’t brought into spotlight. It rather concentrates on the accountability of the despicable mob that was whopping like cheer-leaders. Sarah’s rape is not shown at the end of trial, but in a way that five minute hard-hitting sequence wasn’t as painful for me as the film’s opening moments or when Sarah says at trial, ‘I heard someone screaming and it wasn’t me’. 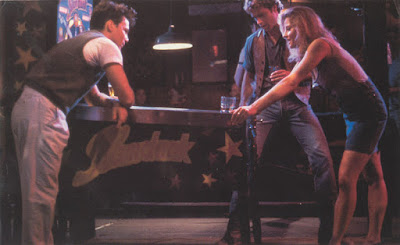 Director Kaplan doesn’t take the sensationalist approach in depicting that sequence and even terrifies us by showcasing the viewpoints of victim, perpetrator and on-looker. But, I felt that the rape scene could have used less camera movements and cutting. The odd and neatly resolved ending also blunts the outrage that viewers derive from the rape scene. The final summation by the attorneys at the trial is a bit monotonous, repeating the points without much insight and Kelly McGillis flat performance doesn’t influence us strongly. Kathryn, finding the crucial witness through the arcade machine and the witness changing his hard stance with a little exchange are some of the movie’s contrived moments. However, the film works and rests on Foster’s performance. The way she imbues fragility and dignity into Sarah, without ever turning the character into a mere crybaby reminds of how multi-layered her portrayal is. The bond Sarah tries to make with Kathryn also feels very real and touching.
Trailer
Despite its tidied-up resolution and contrived moments, “The Accused” (110 minutes) raises compelling questions on the subject of rape and how the victims are blamed or treated by the system.