Mikio Naruse’s first three adaptations of Fumiko Hayashi’s stories – Repast (1951), Lightning (1952), and Wife (1953) – explored how women’s social roles remain limited by traditional gender norms despite the reforms in post-war Japan. Late Chrystanthemums  (Bangiku, 1954), also based on the three stories of Hayashi, explores the hardships of women living outside the familial institution of Japanese society. Set amidst the complex, social and economic landscape of metropolitan postwar Tokyo, the film deals with the everyday concerns of four middle-aged women plagued either by lack of money and opportunities, or by the harsh public perception. Staged as usual with precision and simplicity, Naruse delves into the female subjective experience of social transformation in the modernizing Japan. 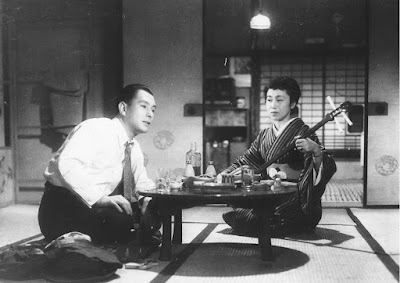 Naruse wouldn't be lionized as a feminist film-maker by the contemporary standards. His method is more of passive observation, which nevertheless frequently engages with questions of female subjectivity.  Furthermore, Naruse's nuanced, poignant portrayals of suffering woman within a ruined nation stops short of explicit social criticism which can polarize the viewers. Late Chrystanthemums is predominantly set in a back-street Tokyo neighborhood, and its four central women characters had worked together as geishas in their youth whose relationship has turned more complex in the dismal economic state of post-war Japan. Of the four, Kin (Haruko Sugimura) has flourished as the women of means, whose financial independence comes at the expense of friendship and male companionship.

Kin lives in a better household with a deaf and dumb servant girl. She is a shrewd moneylender and does real estate with her business partner, Itaya (Daisuke Kato). Kin is shown to be amassing wealth just for the sake of it, since it’s made clear that there’s no one in her life to share the fortune. Kin’s everyday routine consists of relentlessly pestering her ex-geisha pals, Tamae (Chikako Hosokawa), Tomi (Yûko Mochizuki), and Nobu (Sadako Sawamura) who have all borrowed money from Kin and all leading a hand-to-mouth existence. All three women talk about Kin behind her back. Nobu and her husband make ends meet with their restaurant and pawn business. They have reached a position to pay Kin the interest. Tamae and Tomi, however are very unlucky, holding onto the menial jobs that isn’t enough to pay their rents.

The unmarried Tamae and Tomi have one grown children, and they decide to leave the home and live their own life. Burdened by loneliness and without any real means of support, Tamae and Tomi spend their evenings getting drunk. One of the best things about Naruse’s technique is that he glimpses at his characters in a naturalistic manner which evokes neither scorn nor pity. The narrative might revolve around women complaining about their plight, but their existence is also defined by a tenacity of sorts. Kin suffers snide comments from her friends whose ‘haughtiness’ often becomes the topic of interest.  Nobu at one point casually states, “I know what she used to do. She manipulated men for money.” 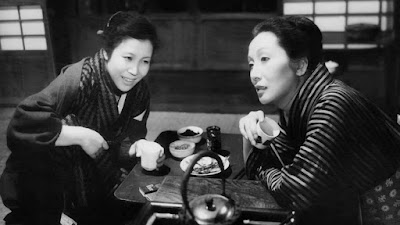 Kin’s determination to keep following the motto of ‘eat or be eaten’ is tested by two men from her past. One is Seki, a man who once obsessively loved Kin that he tried to commit love suicide with her. The other is a former soldier named Tabe (Ken Uehara), whom Kin is looking forward to seeing. But both men visit her with the same purpose in mind: to beg for money. More memorable is the narrative’s bittersweet, penultimate scene as Tamae and Tomi watches a young woman in a tight skirt and heels, passing them with a signature Marilyn Monroe walk. Tomi attempts an impersonation of the step. They both laugh, knowing well that they are left behind in this new cultural and socioeconomic setup. Yet the women are intent on making their way in the modern world – the sunlight of metropolitan Tokyo further emphasizing their will to survive.

Though Late Chrysanthemums isn’t as psychologically profound as Naruse’s later works dealing with similar subject matter – Floating Clouds (1955) & When a Woman Ascends the Stairs (1960) – there’s a pleasure in absorbing the director and his regular screenwriters’ – Sumie Tanaka & Toshiro Ide – anthropological or sociological view of post-war Tokyo. Naruse’s skills are clearly unparalleled when it comes to detailing and observing the rhythms of everyday life in the city. There’s fluidity in the way Naruse cuts between various characters and their spaces, often adorned with different visual motifs. One particularly well-staged sequence is the showcase of Kin’s vulnerability when she meets Tabe, which is crosscut with camaraderie existing between Tamae and Tomi as the friends get themselves intoxicated to soften the blows of everyday life. The rain serves as the linking point as Naruse cuts between two melancholic spaces riddled with human emotions.

Overall, in Late Chrystanthemums (101 minutes) Mikio Naruse perfectly maps out his observation of human emotions with respect to their socioeconomic conditions and interpersonal relationships.