Le Trou aka The Hole [1960] – A Tense, Immersive Masterpiece 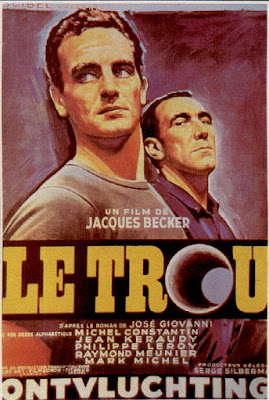 ‘Film is a visual medium: show, don’t tell’ would be the often repeated mantra for budding screenwriters and film-makers. But, we don’t often get well-constructed movies about people doing precise stuffs. I am not talking about the sweeping camera movements of Emmanuel Lubezki that makes everyone of us go ‘wow’. But, I am more fascinated by the simple people doing clever, elaborate things, driven by untamed spirit (not that there’s nothing wrong with Lubezki’s waltzing camera movements). Think about the way Paul Thomas Anderson sets up the form and characterization in the opening scene of epic “There Will Be Blood”; or the canvas of beauty and brutality in Nicolas Winding Refn’s “Drive”; or else Coen brother’s stupendous visual weight diffused into Cormac McCarthy’s “No Country for Old Men”. These few examples of contemporary cinema tells us how the dialogues and the detailing of characters’ background just got to be the icing on a cake, while their visuals seeps in enormous tension by both expressing as well as obscuring. More than five decades before, French film-maker Jacques Becker made a film about the arduous quest of common, imperfect people, documenting their actions with one-of-a-kind visual exactness. This movie entitled “Le Trou” (1960) was based on a novel by Jose Giovanni and regarded as one of the greatest French film ever made by the master of pacing, composition and lighting Jean-Pierre Melville.

Jacques Becker died nearly a month before (on Feb. 21, 1960) the release of his last film “Le Trou”. He was a friend and worked as assistant to greatest artist of cinema Jean Renoir. Although Becker’s oeuvre was admired by French New Wave members, his brilliant works like “Touchez pas au Grisbi”, “Antoine et Antoinette”, and “Casque d’Or” were overlooked by critics and general audiences of the era. Becker’s works persistently observed simple humans, driven by mundane activities to achieve great triumphs. His way of observation never calls attention to the imagery. As Mr. Ebert says about Becker’s visuals: “Almost everything is seen at eye level, point of view is respected, and the style shrinks from calling attention to itself”. Becker’s “Le Trou” has the most economical and oft repeated central plot: five prisoners, waiting in the cell for their unpleasant judgement, decide to tunnel their way out from the sprawling Sante prison in Paris. But the delicate, scrupulous visuals immediately pull viewers into the narrative, making us an active participant in the narrative. 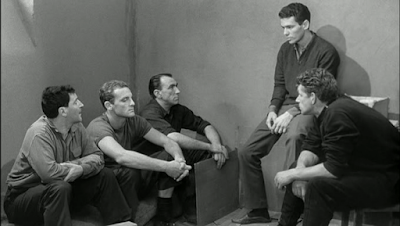 “Le Trou” is about men breaking out of a dour place, although the movie opens in a fourth-wall breaking manner with an introduction from Jean Keraudy, who plays Roland in the film, and was involved in the real prison-break attempt in 1947. Then Becker cuts to ominous and intimidating premise of Sante prison, setting up a minutely expressive tone, from which it never wavers. We are first introduced to Claude Gaspard (Marc Michel), whose keepsake cigarette lighter is scrutinized by warden and Gaspard being a model prisoner is left of with a warning. Since his cell block is under going refurbishment, Gaspard is transferred to an over-crowded cell, occupied by four other inmates – Manu (Philip Leroy), Roland (Jean Keraudy), Jo (Michael Constantin) and Monseigneur (Raymond Meunier). The way they bear their stress, their manner of speech and idenity are vastly different, but there’s an evident kinship between them. 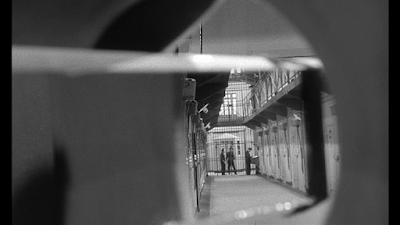 Gaspard says that it feels to be good among them and shares the cigarettes and privileged food items, he receives from his mistress. The four are naturally suspicious of his arrival, especially considering their hazardous near-future plan. They question about Gaspard’s crime and family background. Gaspard is in for attempted first-degree murder. He has had an argument with his rich wife for having an affair with her 17 year old sister. The argument moved onto shot gun waving and ensues in a shoulder injury to wife. Considering the severity of charges against him, the four comment that Gaspard is at least gonna serve 15 years. There’s honesty and naivety in the way Gaspard conducts him and so the four decided to confide in him. Not the stories about what pushed them into prison or how innocent they are; the four just explain their plan to dig a hole in the cell floor. ‘The hole’ would be concealed by the box making card-boards, which the prisoners have volunteered to work on. Before long, Roland – the escape artist – initiates the backbreaking plan and as days go past, they all dig, keep watch, exchange foods and little life stories. 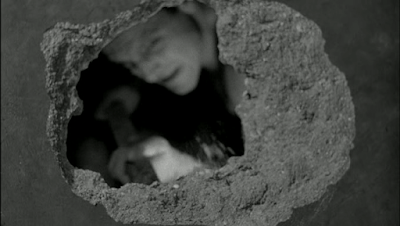 ‘So what’s great about this mundane prison-break story?’ might be the question that rises to one’s mind after reading the basic plot. As in the greatest works of cinema, the answer doesn’t lie on ‘what’ but ‘how’. The ‘how’, by which I mean Becker’s acute, awe-inspiring attention to detail and pursuit for pragmatic realism. The screenplay by Becker and Giovanni doesn’t employ any flashbacks and tells what we need to understand about the characters only through the current scenario. When the men sit in circles or semi-circles, they don’t go on and on about their life before prison or dreams after getting out. Those scenes are not to do cinematic justification, but a precise recreation of walled in life. The four prisoners plus Gaspard are inherently shown as hard-working and trustworthy as all the officers & workers in prison thinks of them as model prisoners. It’s a simple setting that makes us empathize with them, without worrying about their crimes or background. It is said in the wake of World War II (the period this film was set in) quite a many good, hardworking people are imprisoned for one reason or another. Director Becker himself faced imprisonment in those times and so more empathy is exhibited towards the accused. Despite the rising stress levels, they rarely take it out on the fellow inmates (the sequence involving plumber is the only occasion we see them violent and furious). The writers also don’t provide any before hand explanation of their escape plan (through dialogues). We see Roland unscrewing a bolt from metal cot and separating the cot leg. After doing that, he says ‘it will do’. We don’t know what he is going to with it, which is left to express through unbroken imagery. 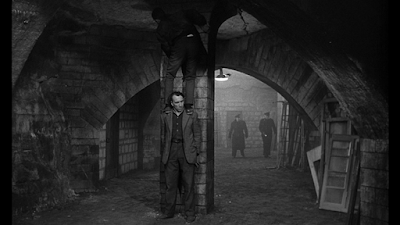 If the characters deliberately lack the meticulous details, Becker’s film form is full of delicate constructions as well as deconstructions. In one of the movie’s intense and highly memorable sequence, the camera (cinematography by Ghislain Cloquet) lingers for nearly four minutes (an unbroken take) as Roland, Geo and Manu take turns in breaking through cell’s floor. The actors performed this scene on real time and the shot concentrates on their hands, indicating the excruciating nature of the task and their overpowering physicality. In a later scene, Roland cuts through a metal bar, wherein once again the shot captures the intense breath and movement of hands. There’s a breaking of small, hidden piece of mirror, which is constructed to serve as periscope. An hour glass is made cleverly to pin-point the passage of time. A prison guard painstakingly looks through food parcels, cutting packets of soap and butters to search for any contraband stuff. Those unedited moments of construction and deconstruction reflect the tedious constancy of life inside prison as well as the adaptation of monotony (like digging, keeping up the time, etc) to eventually break-out from there. A slight mishandling of this documentary-style realism would have rendered viewers inattentive, but Becker and Cloquet completely enshroud us in this confined environment that we just marvel about the ingenuity at work. It is also vital to understand that despite all the physicality of direction, “Le Trou” greatly succeeds due to unforced humanistic moments.

The small hole in the floor of prison cell could be viewed as symbolization of the men’s psyche confined within four walls. As the film progresses, the men go through bigger holes or in the arduous process of creating bigger holes, which further creates intense doubts or bewilders their psyche. Of course, Becker doesn’t use the presence of holes to create cheap symbolism or psychological moments. And, although the transformation of Gaspard forms the emotional anchor for the film, there’s only a sense of pity and irony rather than heavy doses of sentimentality. The non-professional acting cast performs their roles with an understated, natural force that perfectly highlights the characters’ friendly, patient nature. It would have also been a harder task for professional actors to display such manual dexterity like these men, especially Roland (with half-amputated fingers).

In the age of pompous protagonists making overblown escape plans, “Le Trou” (126 minutes) offers an unforgettable, edge-of-the-seat movie experience with the detailing of prosaic movements. The movie’s humanistic core and emotional truth withholds a timeless quality, waiting be embraced by cinephiles all over the world.

Le Trou -- IMDb
at April 13, 2016
Email ThisBlogThis!Share to TwitterShare to FacebookShare to Pinterest
Labels: Based on True Story, Thriller