Jon Amiel’s serial-killer thriller Copycat (1995) starts off in a very academic or didactic manner. The film opens with a criminal psychologist addressing a large classroom of students about ‘what makes a serial killer’. The lecture is meretricious, referencing to mastermind murderers like Ted Bundy, Jeffrey Dahmer, etc. The ‘serial-killer for dummies’ speech confirms the fear of a narrow, if not generic, approach that’s about to define the narrative flow. But the film has much more smart storyline than expected and spectacular performances from two female leads – Sigourney Weaver and Holly Hunter. 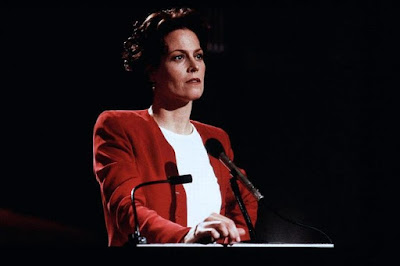 Considering the overwhelming amount of testosterone found in these kinds of films, the female leads provide an interesting perspective. Script writers Ann Biderman & David Madsen slips in fine feminist statement by showcasing empowered women overpowering the hyper-masculine world of law enforcement and involved in halting the nauseating violence of a killer. Nevertheless, Copycat isn’t a profound thriller where its commentary on gender would generate a huge impact (still it’s exhilarating to see such alterations in a main-stream Hollywood feature). It’s an entertaining (if not a deliberately deviant) thriller very much in the true sense of the world and (thankfully) relies on breathing tension through stark compositions of staging rather than resort to graphic violence or gore Interestingly, the film didn’t gain much attention during its release, the reason addressed to huge popularity of David Fincher’s genre redefining thriller Se7en.

The performances smooth out certain shortcomings in the narrative. Case in point: the opening flashy scene, where Sigourney Weaver’s commanding delivery of dialogues makes the heavy-handed speech almost interesting. During the lecture, Dr. Helen asks every white male in the auditorium between the ages of twenty and thirty to stand up and warns the gatherers that most of the American serial-killer hails from this age-group and skin color. Later, the self-assured and smug appearance of Weaver’s Dr. Helen Hudson, a psychologist & serial-killer profiler, is affected by a dreadful event. After the lecture, she endures an attack at the hands of her former subject Daryll Lee Cullum (Harry Connick, Jr.). 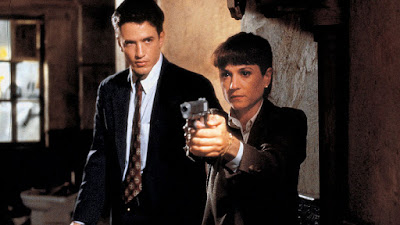 Although she survives (and a cop is brutally killed before her eyes) the traumatic experience renders her agoraphobic. Thirteen months later, Helen cozily lives up in her San Francisco apartment, taken care by a gay live-in assistant, Andy (John Rothman). She shares her phobia with e-mail buddies (intriguing to see early use of internet and characters fretting over limited storage and cache space), and somewhat addicted to both pills and alcohol. Even the prospect of retrieving a newspaper outside the door reduces Helen into a nervous wreck.

Meanwhile, young women are being brutally murdered all over San Francisco. The crime seems unconnected, but the smart detective on the case M.J. Monahan (Holly Hunter) believes the perp is the same guy. Though Helen has stopped working, she regularly calls the police and shares her thoughts on the bizarre killings. The police dismiss it as a crank call, until Monahan and her handsome partner Reuben (Dermot Mulroney) seeks out Doctor Helen. Reuben and Monahan initially perceive the doctor as an angst-ridden pill-popper, but her precise observations about the crime scene and killer’s procedure makes the detectives commence a shaky partnership. Doctor Hudson soon discovers that the serial-killer follows an unusual and disturbing pattern: each killing recreates the crime scene of a well-profiled notorious serial killer (The Boston Strangler, The Hillside Strangler, and so on). However, what Helen fails to determine is that she is the vital piece in the killer’s despicable pranks.

Jon Amiel’s direction is admirable and silly in equal parts. He does a good job in the tense confrontation scenes, diffusing a gloomy interplay between shadow and light. He also makes good use of spacious apartment – its windows, jagged angles, etc – to create atmoshperic unease (cinematography by ‘Easy Rider’ & ‘Paper Moon’ fame Laszlo Kovacs). The other fine directorial tactic involves not showing the vicious murders of young women on-screen (except for the creepy scene in the killer’s basement). Director Amiel’s use of certain old tricks to delineate Helen’s psychological affliction does seem gaudy: for example, hallway tilting gaze to insist agoraphobia. Amiel, however, does an excellent job in directing the crew of talented actors. While he embraces the macabre nature of the proceedings, he never loses focus on the inherent agony of his two lead characters. Sigourney Weaver’s character conception pretty much resembles that of Ripley (in ‘Aliens’). She is an expert on ‘the subject’ which also happens to be the source of her nightmares. She eventually faces the nightmare and triumphs over it. 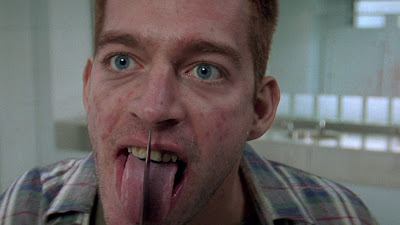 Be it the outer-space alien fighter or terrorized psychologist, Weaver imbues her character with an extremely believable fragility as well as robustness. Holly Hunter is equally good in the detective role, deftly exhibiting the multi-faceted nature of the character. The two actors perfectly play each other: their partnership is initially volatile in nature and slowly exudes mutual respect for each other. Some of the script’s patchy dialogues look nearly convincing when uttered by these powerful actors. As for the performances of actors playing the serial killers (Harry Connick Jr & William McNamarra) it’s deliberately flashy and viewers may either hate or like it (their shenangians were at tolerable level for me). Biderman & Madsen’s script falter with its pedantic approach at few occasions and their efforts to weave romantic subplot (featuring Detective Monahan and Reuben) doesn’t produce desired results.