Mohsen Makhmalbaf's "A Moment of Innocence" -- An Analysis 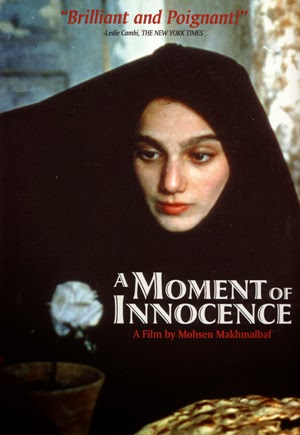 Iran’s pioneering film-maker Mohsen Makhmalbaf, at the age of 17, was an Islamic militant. He tried to attack a policeman in order to steal his gun, but Makhmalbaf only ended up in jail. In “A Moment of Innocence” (his personal favorite film), he revisits this incident, trying to imagine the policeman’s perspective as well as reflecting in hindsight on his own firebrand youth. He plays himself as a director of the film-within-the-film, which reenacts the event. The film won the Special Jury Award at the Locarno Film Festival in 1996, but was banned on Iran until 1997.

Abbas Kiarostami’s influence is evident in the film’s minimalist style and formal organization, with title cards and clapperboards opening and ending scenes. But, more significantly in the blurring between reality and its staged remake, the film embodies the multiplicity of truth through a quiet erosion of the dead certainties. These dead certainties include the single-mindedness of terrorists who believe that there is no other course of action.


In the movie, the former policeman, knowing that the guy who tried to kill him is now a famous film director, visits his home to ask him for a part in a film and is greeted by Makhmalbaf’s daughter (Hana, starring as herself). Having chosen their topic, Makhmalbaf and the ex-policeman separately audition and coach actors to play their younger selves. We follow the ex-policeman and his protege first, and learn that when he was on his beat, a woman kept asking him for the time. He fell in love with her, convinced that she must love him also, although he never saw her again after the Makhmalbaf incident. 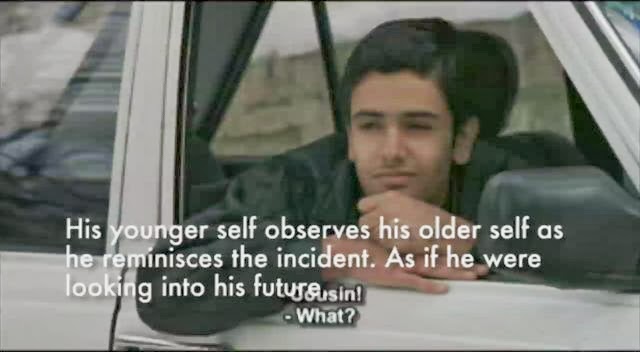 Cutting to Makhmalbaf’s perspective, we discover that this woman was Makhmalbaf’s cousin and accomplice, who flirted with the policeman just to distract him so that Makhmalbaf could stab him with his knife. Makhmalbaf and his cousin were in love with each other and determined to save the country by using violence. Makhmalbaf instructs his younger self to re-enact this version of past; but, although the young actor is happy to embody the youthful idea of robbing a royalist bank and using the money to plant flowers in Africa, he refuses to use violence, insisting that there must be some other way. On set, the young Makhmalbaf sobs and discards the knife with which he is supposed to attack the policeman. When the ex-policeman discovers that the rendezvous he was expecting with the woman he loved is actually part of the assault plot, he becomes furious, realizing that the love he cherished for twenty years is a delusion.


Whereas before he had coached the young policeman to offer the woman a flower in the pot, he now instructs him to draw his gun. But, in the climatic concluding scene, when the assault is finally filmed, the young policeman does not draw his gun and impulsively offers the woman the flower, and young Makhmalbaf, in turn, presents the policeman with a flatbread, under which he had hitherto concealed his knife. This exchange with the chador-clad woman caught in between, is arrested in the film’s ending freeze-frame. 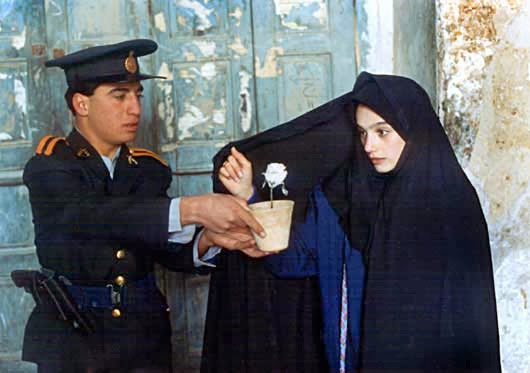 Into his fictional re-imagining of events, Makhmalbaf adds these elements: the policeman in love, the revolutionaries in love who want to save their country by any means, and the younger generation’s refusal of violence and desire to save the country by other means, including love. Just as the ex-policeman finds his twenty-year-long delusion shattered, so are Makhmalbaf’s former ideological convictions also called into question.


As the movie progresses, more and more alternative realities are negotiated and put into contact with the past ‘as it happened.’ The narrative has an overlapping structure, with two scenes, which are shown twice, but each time from a different perspective. For example, just after the ex-policeman reveals his love during a rehearsal with his younger self, a woman asks the young policeman the time. ‘It happened just like that’ exclaims the ex-policeman. But, when the scene is repeated, we have learnt that the woman is the young Makhmalbaf’s cousin. We realize that the two sequences have not taken place in chronological order, as we thought, but simultaneously. The repeated scene is imbued with a different point of view, as it is now no longer inserted within the strand dealing with the ex-policeman but in the strand dealing with Makhmalbaf. The repetition gives the aforementioned words an ambiguity they did not have before.


What such scenes underlines is that there is no absolute reality, but one that always changes, depending on the angle at which one views it. Now Makhmalbaf believes that the reason why people retort to violence is that, ‘First (they say) we are absolutists, and the truth is with us. Secondly, in order to carry out this (they say that) no other way exists except violence.’ In his film, Makhmalbaf, defies these and other dogmas of contemporary Iranian culture, which he sees as ‘culture that closes doors.’ Not coincidentally, several scenes take place in front of closed doors, including some showing disembodied woman’s hands giving directions or handing out soup. 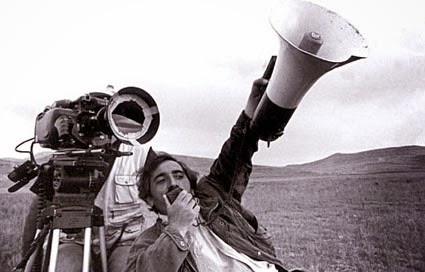 In the final freeze-frame, the veiled woman and the Young policeman are the astonished recipients of peace offerings. The image arrests the moment where the past – Makhmalf’s original terrorist act – transfigured by the present – the young actor’s spontaneous refusal of violence. But the ‘moment of innocence’ of the film’s title could refer to numerous other meanings embedded in this image: Islamic militancy, revolutionary idealism, terrorism, law and order, adolescent romance, revenge, pacifism and so on. It succinctly expresses Makhmalbaf’s revised stance on his past: “I no longer believe in absolutes and have accepted that I don’t have all the right answers.”

A Moment of Innocence -- IMDb
at February 12, 2014
Email ThisBlogThis!Share to TwitterShare to FacebookShare to Pinterest
Labels: Iranian Cinema, Social Drama