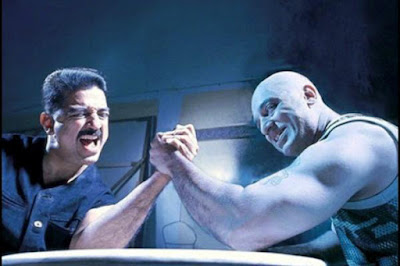 Kamal Haasan is one of the few cinema personalities who continue to fascinate me. People might disapprove some of his works, scoff at his views, but his achievement and contribution to Tamil/Indian cinema outweighs his flaws. I don’t concur with all his opinions or a loyal fan. But there’s a warmhearted or nostalgic feeling when thinking about Kamal Hassan, the giant of Indian mainstream cinema. Prolific and prodigiously talented are too small words to describe Kamal’s talent. He acted in his 100th film at the age of 25 (I don’t know any other actor who has done that). From acting, cinematography, direction to make-up, Mr. Kamal possesses profound knowledge about all the departments that gives birth to a cinema. If I just list out only the interesting aspects of Kamal’s cinema journey (after a brief search through google), I can easily write a very long essay. However, this particular post is about one film in the actor’s filmography that has made a huge impression on me -- “Aalavandhan” aka “Abhay” (“Born to Rule”). I could acknowledge a lot of flaws in this film, starting with how it turned out to be vanity or self-indulgent project. But, there’s something magnetic about this film which doesn’t stop me from re-watching it again and again. And we always learn something from a bad Kamal film than from a formulaic Indian film.

The first memory of “Aalavandhan” is the famous poster of two Kamal Haasans (Vijay & Nandu) curling their biceps, testing the strength. Then there’s the theme song (‘Kadavul Padhi Mirugam Padhi’), sung by Kamal in his strident voice, which still gives me goosebumps as it did when I was a 14 year old (the time when this film released). The hype for “Aalavandhan” was too high that it had a heavy fall once the screenings started on Nov. 16, 2001 (on Diwali). I watched the actor’s villainous avatar Nandu with amazement, although back then I couldn’t follow what’s happening (many were scratching their heads after the end of first-half). The hallucinatory trip taken by schizophrenic killer Nandu was too much for the audience who were just expecting a twin brother masala cinema. “Aalavandhan” is pretty much a mainstream cinema that’s blended many film sub-genres, starting from stoner/psychopath to romance; to psychological thriller. Kamal Haasan brilliantly and subtly explored the themes of duality, the violence and trauma inflicted on an individual (as well as on a nation) in his magnum opus “Hey Ram!” (2000) [which was also a big commercial disaster]. While his favorite pet theme of duality was present in “Aalavandhan”, the physical and psychological violence is too personal and a singular experience. So, it’s a story-line that may easily provoke the viewers but won’t easily make them connect with the character.

Vijay is a courageous commando with a pregnant girlfriend. Nandakumar is a criminally insane schizophrenic. He is intelligent, but also has huge delusions of grandeur. Vijay visits Nandu in the mental asylum with his girlfriend to confide about his marriage. The visit triggers in Nandu the repressed memories of the physically abusive step-mother (whom Nandu killed when he was 12 years old). He thinks Vijay’s girlfriend Tejaswini is the incarnate of his evil step-mother. Nandu plans to escape from the asylum to save his brother Vijay (just like he saved him from step-mother). However, to his schizophrenic eyes the world looks disconcerting that he commits more casual crimes.  Like Nandu’s brawny muscles, the cinematic form of “Aalavandhan” was too weighty for the audience’s sensibilities (back then). It was one of a kind psychotic thriller in Indian cinema. It doesn’t mean that Nandu was a very realistic criminally insane character ever conceived on-screen, but the pulpy fun he has in his confusing surroundings was filmed in a unique manner.

“Aalavandhan’s” script was written by Kamal Haasan, based on his own 1984 novel ‘Dayam’. Films scripted by Kamal Haasan always lose a lot in the translation. The visuals would either lose the nuance proposed in the script or the directorial approach would be too simple to carry the weight of his writing. It could be heavily felt in films like “Aalavandhan”, “Uttama Villain”. Watching it now, the film becomes less fascinating when it shifts to the ‘reality’ as the cat-and-mouse game between the brothers starts. Something seems to have gone missing on Vijay’s bland characterization and the reason behind why Nandu chooses to kill his own brother (in the last scenes) whom he wanted to save. Either the director (Suresh Krishna, although Kamal might have ghost-directed a lot of sequences) has fumbled with the depth of characters or there was no depth or meaning given to character decisions in the script. Given the nuances I often find in going through Kamal’s scripts, I believe a significant chunk of his themes were lost by director and at the editor’s table. It would be important to note that no other film would have been as brutally edited by theater owners as this film and “Virumaandi” (reason was: not suitable for family audience).

Nandu wades into his self-designed la-la land after he cleverly sets up his own death. In the glitzy city, he is not only out of medication, but was injected with drugs. The green tint in the visuals indicates the polarizing realities. In this befuddled world, he encounters animated trolls that poke at him and seven-foot tall Ronald McDonald. The statue asks ‘what’s the time’ and Nandu wonders ‘What’s happened to the time’. Iconic actor Ashok Kumar’s performance of the famous ‘Rail Gaadi’ song plays in the background (from the 1968 Hindi film ‘Aashirwad’). The cartoonish, overly joyous surrounding insists on Nandu’s undeveloped cognitive functions. He not believes that the world is revolving around his antics, but also thinks the grievous dangers are lurking around every corner. The newscaster (Tejaswini) suddenly turns into the cartoon version of his step-mother and as a man with cognitive skills of a child, he fights back like the cartoon characters. In the imaginative session Nandu has with his psychologist, he confides ‘he learned the new fighting skills by watching cartoons like other kids’. The lethal female character who kicks him after jumping out from every billboard just makes Nandu to go back to his familiar world. He wants to call his doctor & brother Vijay to put him back in the slammer. When he hears the Tejaswini’s gleeful voice in the voice-mail, the kill-switch in his mind automatically becomes active. The beast once again takes over the man.

The feeling that Nandu is just a child lost in the sea of modern world is beautifully conveyed in the hallucination scene. But the dangers this child brings with him are exhibited through his sudden embrace of cartoonish, bloody violence. The glimpse of Nandu’s talents is shown through his poems and the way he explains the grim events in his diaries. But, he is not a clever serial killer we usually see in movies. Despite heavy, solid muscle and a very commanding voice, Nandu is limited by his psychotic condition. A flip of a coin makes him a beast and whip with the belt turns him to a little boy. As Vijay in an earlier scene tells ‘Memories are the foundation of his disease’. Killers with no particular rhythm and their murderous instincts triggered by trivial things (like coin tossing) are more unsettling to see than the ones with a detailed plan. Most of his social interactions with people end up with Nandu killing them. He doesn’t know what to do with them and there’s nothing much he can do when he thinks they are going to kill him.


“Aalavandhan” was talked for its high-budget grudge match between Nandu and Vijay. The overall verdict from critics during its release was that it was a mess. Nevertheless, it is the kind of entertaining, watchable mess which has elevated to its cult status. Watching it now, the completely bonkers action scenes of the second-half are less fascinating than the visionary crazy sequences of the first-half. The only juicy element of the second-half are the harrowing flashback portions, where we learn how one of the twin brothers turned psychotic (the kids’ performances were excellent). The theme of step-mother abusing the kids is a very old one. But the way the abuses and its effects are visualized sends a chill down my spine. In the scene, when the twin brother’s dad introduces step-mother (Kitu Gidwani) she gives them a kiss. The kiss seems cloaked with sinister intentions (definitely not motherly). Such little suggestions infuse a singular, bleak vision. The eventual killing of step-mother by Nandu and his casual reaction is the stuff of nightmare. The fact that Kamal Haasan attaches the ‘reason’ to a simple coin toss adds to the script’s inherent (energetic) craziness. Compared to many of the high-budget 2016 star vehicles, the technical prowess witnessed in “Aalavandhan” still looks fresh.

Critic Baradwaj Rangan in his review of “Uttama Villian” (2015) said, “The best Kamal Haasan movies are probably locked up inside his head, where they reside in the most perfect possible manner.” That’s the perfect way to describe “Aalavandhan’s” output too. The rough-edges we experience on-screen stops some of his films from becoming the masterpiece, it deserves to be. Anyway, even those rough-edged attempts of Kamal are endlessly fascinating to watch. Despite some shoddiness, a quality shines through. Recently, “Aalavandhan” was screened at the Fantastic Fest, the largest genre film festival in the U.S. (held at Austin, Texas). It made an impact with American audience and many took to twitter to register their entertaining experience. One comment said, “the most fun I’ve had in a movie theater in a while.” It made me remember that I haven’t watched it this year (and I watched it for umpteenth time).