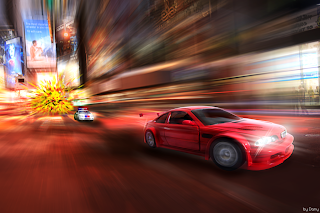 Nothing gets a guy’s attention faster than a car chase. Who can resist the incredible speeds, awesome destruction and raw adrenaline that accompany such sequences? It’s consequently not surprising to note that some of the most memorable pursuits in cinematic history have been infused with a palpable sense of danger and recklessness.

Car chases in the movies aren’t what they used to be. Computer-generated effects tend to kill suspense and surprise and turn the experience into something as artificial as a video game.The golden age of car chase movies arrived in the late 1960s/early 1970s, when filmmakers played a ruthlessly competitive game with daredevil stunt work and car demolition.
While there’s certainly no shortage of amazing sequences to choose from, I have managed to narrow the field down to most original and thrilling  car chases that’ll leave even the most viewer breathless.


Bullitt(1968)
One of the screen's all-time best car chase sequences (at up to 110 miles per hour) was a 10-minute sequence filmed with hand-held cameras up and down the narrow, hilly streets of San Francisco as police lieutenant Frank Bullitt (Steve McQueen) chased after criminals in his car through hazardous intersections.
The French Connection (1971)
This film has probably the most intense chase sequence ever filmed - it was an incredible, hair-raising scene of unbelievable car-chasing.Detective drives 90 mph in pursuit of a suspected drug dealer.
The Terminator (1984)
The science-fiction classic that made a star of Arnold Schwarzenegger is essentially one long chase sequence, with the star playing a terrifying robot with murder on its mind. Director James Cameron expertly sustains it without revealing the low-budget origins of the picture.
Raiders of Lost Ark (1981)
The most classic of the chase scenes was a desert chase scene in which Indiana Jones (Harrison Ford) raced after a speeding truck by mounting a horse and overtaking the vehicle.
The Bourne Identity (2002)
The Bourne Identity casts Matt Damon as Jason Bourne -- an amnesiac who embarks on a quest to discover his true identity. Jason’s mission takes him to Paris, where he quickly runs with the local police and is forced to evade their pursuit.

The ensuing chase follows Jason as he takes through some exceedingly tight passageways and side streets.
To some, the inclusion of a car chase might seem like cheap filler in a bad movie, but above mentioned films are quality ones.These are just few examples of good, old-fashioned car chase, devoid of any computer driven special effects.

at November 25, 2011
Email ThisBlogThis!Share to TwitterShare to FacebookShare to Pinterest
Labels: Hollywood Movies

There is a car chase scene in Bad boys 2(if i remember correctly:)),that was just amazing:),do watch it when u get time. Michael bay movies may not be best in terms of script,but he definitely is one of the best when it comes to action scenes:).