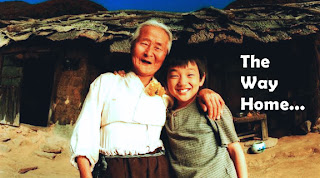 'Dedicated to grandmothers everywhere', "The Way Home (Jibeuro)"  could be one of the pleasant movie to watch in ur life.  The film begins with Sang-woo  being dropped off in a rural village with his deaf-and-mute grandmother, so that his mother could go to job in Seoul. Sang-woo finds difficult to adapt  to his surroundings. His grandmother’s inability to speak and  the country life style without electricity or running water frustrates him. By frustration Sang-woo calls her  a ‘retard.’
Despite his disrespectful behavior, she becomes increasingly generous, cleaning and  cooking for him, and gathering water from well. He begins to accept the new lifestyle, helping his  grandmother to thread a needle, hang up clothes on the clothesline, and shop with her at the market .Over time, Sang-woo slowly comes to appreciate the sacrifices that have been made for him in her home.
The director  Lee skillfully potrays the emotions between her two main characters.      Sang-woo being unmindful of his selfish actions and his grandmother’s tireless acts to take care of him.The performance of her leads are arousing and believable.
Aside form the literal interpretation, “The Way Home” could also be considered an examination of the gap between older generation and youth, who have grown up in world of cell phones, internet access and video games. Like Sang-woo character , it is sometimes easy for us to forget the sacrifices made by older generations.
Trailer:
http://www.imdb.com/title/tt0312841/
The film has a deep impact , after all, we have all been impatient and self-absorbed as Sang-woo. But don’t forget  it is the wisdom of our parents and grandparents that have made us for the better.
Some Trivia’s about this film:
The 78-year-old villager and non-actress 'Eul-boon Kim' had not only never performed in a movie before 'Jibeuro', but she had never before seen a film. She was found during an extensive talent search among real rural village people by director Lee Jeong-hyang to play the lead role of the stoic, heroic mute grandmother.
Way Home  was  second highest-grossing film for a non-commercial film in south korea.
at November 09, 2011
Email ThisBlogThis!Share to TwitterShare to FacebookShare to Pinterest
Labels: Family Drama, Feel Good Movies, Korean Cinema

Touching Movie , Thankz Arun for sharing this Movie ,It connects me to my granny... Have to play this movie in every schools and colleges .