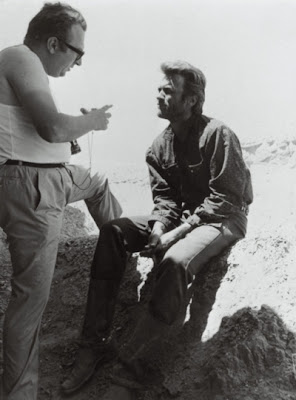 In America, in the early sixties. western films were locked in a range war for audiences with TV - and losing. What cinema needed was an out-of-towner, a specialist who could turn the tide entice audiences from their TV's back into the theaters. Their unlikely savior was an Italian director named Sergio Leone.

By the early sixties some interesting genre changes had driven the western into new and interesting territory. Among these was a remake of Akira Kurosawa's Japanese action drama 'Seven Samurai' (1954) as 'The Magnificent Seven' (1960), which was a massive hit where the heroes' mercenary adventures struck a chord with the audience. When Sergio Leone cast Clint Eastwood in a trio of westerns, it gave the genre a much needed injection of style, wit, violence and grit.

The 'Dollars' trilogy made Clint Eastwood a celebrity climber, from TV star to global success story, and his character 'The Man With No Name' is still probably the most recognizable gunslinger in cinema. Eastwood's hero killed with passion, but no compassion, and was a slender moral cut above the villains he dispatched.

There have been many different versions of how Clint Eastwood came to be a cast in 'A Fistful of Dollars.' The most accepted one is that in 1963, a script called "The Magnificent Stranger" arrived at a agency of Eastwood's representatives. Eastwood was hardly the first choice for the lead role -- the list of actors who had already been contacted included Henry Fonda, Charles Bronson and James Coburn. The project was to be financed by Italian, West German and Spanish investors and directed by Leone. 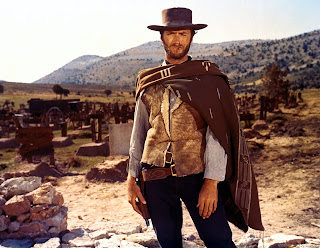 Eastwood recognized the tedious manuscript, which resembled a telephone directory, as a rewrite of Yojimbo, a successful 1961 Japanese Samurai film directed by Akira Kurosawa, which he'd seen on its American release. He loved Kurosawa's action comedy, masterfully shot in black and white. So, Eastwood accepted the offer of $15,000 salary -- even though he was making that kind of money in a single enertainment as entertainers on the rodeo (an exhibition of cowboy skills) publicity tours.

The original script called him 'Texas Joe' while the published script called him "Joe The Stranger", but all US publicity marketed him as 'The Man With No Name.' Joe arrives by mule in the Mexican border town of San Miguel, where he discovers that the district is controlled by two rival gangs of bandits and smugglers: the Rojos, who deal bootleg liquor, and the Baxters, big gun merchants. The stranger sees an opportunity to make a few dollars and exploits the gangs' rivalry hiring himself as a gun-hand to the Rojos. But Joe stirs up trouble, taking payment from both factions. Soon the feud is fervid as ever, with the gangs shooting it out in a cemetery.

Eastwood grew a beard for the role, possibly inspired by Toshiro Mifune, who played Sanjuro, the unshaven lead in Yojimbo. One key mannerism Eastwood taken from Mifune was his thoughtful chin rubbing. Leone shot the movie in Italy and Spain. The budget didn't allow much room for luxury and Eastwood even brought along his own stunt double. Fistful's memorable score was composed by Ennio Morricone, a school friend of Leone's. Fistful was released in Italy in 1964, to great word-of-mouth success, eventually becoming the biggest-grossing Italian film of all time up to that point.


For A Few Dollars More

Eastwood was soon back in Italy and Spain filming a sequel, literally For A Few Dollars More' -- his salary this time was $50,000. Eastwood was again a gunfighter and a bounty hunter named Monco. The story was based on a original outline by Leone. Monco and Colonel Douglas Mortimer (Lee Van Cleef) are two deadly bounty-killers, riding the American southwest of renegade outlaws and cashing in their rewards. When the territories most notorious criminal El Indio escapes from prison, the pair teams up to scoop the $10,000 reward offered 'Dead or Alive.' 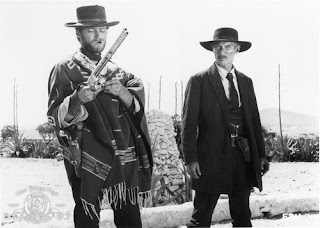 This time Leone had a larger budget than Fistful -- $60.000. He again filmed the majority of movie in Spain. The desolate Spanish deserts, sierras tool center stage, as a memorable and breathtaking backdrop. The great riding scenes, where Monco loses a posse from El Paso, display Eastwood's consummate horsemanship to best advantage. The script was tighter than Fistful and Leone's visual style began to flourish.

In For A Few, Eastwood's hero is more humorous, he even smiles occasionally, and has great final punchline. As he loads the bandits' corpses into a cart to take back to El Paso, his bounty haul calculations fall short of expectations and he realizes he's one villain short. At that moment Monco spins around and shoots an outlaw, who is about to plug him in the back. At the sound of gunfire the colonel shouts, 'Any trouble boy?'; 'No old man,' answers Monco, 'Thought I was having trouble with my adding -- it's alright now.'


Ennio Morricone once again provided the distinctive score, with a main theme deploying flute, whistling chorus and electric guitars - a 'riding theme' powered along by pounding hoof-beat drums. For A Few Dollars More was released in Italy in 1965, to massive and influential success. It was released in US rated R, to even greater success than Fistful, initially taking $5 million.

Eastwood's next project with Leone, The Good, the Bad and the Ugly, in chronological relation to the first two films is a prequel. In early 1862, Confederate forces invaded New Mexico from Texas. Amid the confusion, as the war engulfs, three men have something else on their minds; hired gun Angel Eyes (Lee Van Cleef), a Mexican outlaw Tuco Ramirez (Eli Wallach) and his partner, shifty drifter Blondy (Eastwood), are searching for a cash-box containing $200,000 in gold coin buried in a grave marked 'Arch Stanton' in sad hill. 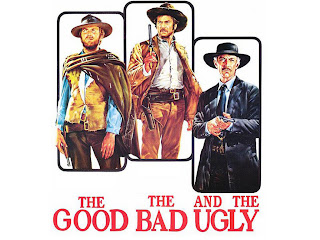 The epic story was written by Leone and Luciano Vincenzoni. This time Leone had a budget of $1.2 million. This time Eastwood drove a hard bargain; for his role as Blondy 'The Good', he received a quarter of million dollars. Leone's anti-heroic depiction of American civil war filled his towns with refugees and troops, while the military hospitals are packed with the bloodied wounded.

The film's battle scenes deployed hundreds of extras and heavy duty artillery, including Gatling guns (rapid firing guns) and mortars. In his third Leone outing, Eastwood's performance is confident and effortless. He deploys his full range of 'Man With No Name' mannerisms; the double takes, the squint, mouthing the cigar, the long silences and the empty half-smile. This time there is more humility and humanity to Eastwood's gunman. Morricone's most famous composition, the film's title music, is cut to an equally memorable title sequence, with colorful tinted stills from the film, explosions and dust. The main theme, a guitar-twanging, bugle charge, is one of the most famous western themes of all time.


With epic battles and scores of extras, it is ironic that the finale involves only the three antagonists competing for the prize -- the contents of the grave marked 'Unknown', the tomb with no name, next to Arch Stanton's, which contains a cash-box. It is one of the most memorable endings to a western and a fitting climax to the 'Dollars trilogy' as the Good, the Bad and the Ugly shoot it out in the epicenter of the vast graveyard, with Morricone's thundering soundtrack.

The 'Dollars' films' success in Italy led to the 'spaghetti western' craze, which produced hundreds of films in the next ten years and revitalized, the Italian film industry. Following The Good, Eastwood and Leone didn't see each other for years, as their careers diverged on different projects. 'I have often been asked if I could make another film with him' said Sergio Leone (at the time, making Once Upon A Time In America), 'I always refuse. It is impossible.' They could never have surpassed the 'Dollars' trilogy, especially The Good, the Bad and the Ugly, their masterpiece.
at September 24, 2012
Email ThisBlogThis!Share to TwitterShare to FacebookShare to Pinterest
Labels: Masters of Cinema, Western

Now I know, from where did Anil kapoor got his style...hahahah pic 1

Thanks for the memories. Clint Eastwood and Sergio Leone were the Johnny Depp and Tim Burton of their time.

@Shovon, Thanks for the comment. It's just unfortunate that Eastwood and Leone didn't make more movies like Burton and Depp.