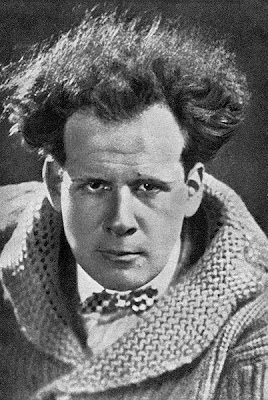 Sergei Eisenstein together with his colleagues Pudovkin, Vertov and Alexander Dovshenko, revolutionized film directing. Building on the work of D.W. Griffith, each set out an different path for creating films, but each did so out of a conviction that the power of film should for harnessed for public purpose -- to change society. Each of these directors had a different aesthetic. Pudovkin embraced the theatrical, Vertov embraced the documentary in its most orthodox form, and Dovshenko embraced the poetic. To say that Eisenstein saw film as architecture or as graphic design or as a new malleable medium arising out of literature is too limiting.

Eisenstein, like Griffith before him, explored the medium of film and contributed new ideas about film. In addition to Griffith, Eisenstein's ideas about film made him a key explorer of the medium. His ideas about editing remain important. And his influence on directors such as Sam Peckinpah and Oliver Stone confirmed his continual relevance to directing. For Eisenstein, editing is the core creative strategy, and his director's idea is articulated in those ideas about editing. For Eisenstein, history is conflict, the inevitable contradiction of one force fighting another. The clash of images has to be articulated and given a human face.

Eisenstein directed fewer than ten films from 1925 to 1945. When he fell out of favor, he would teach and write. At the invitation of Charlie Chaplin, he tried Hollywood in the early 1930s and developed a script for a novel 'An American Tragedy' at Paramount, but his American interlude was not successful. Eisenstein is best known for his films "Potemkin" (1925), "Alexander Nevsky" (1938) and "Ivan the Terrible."

Turning more to specifically to Eisenstein's director's idea, although Eisenstein considered editing ideas to be the most powerful manifestation of that idea, he believed that text interpretation as well as style of acting contributed to the director's idea. With regard to text interpretation, Eisenstein approached his screen stories in a particular fashion. "Strike" (1924) examines the consequences of labor rebelling against management, with the government not mediating but rather aligning with capital against labor. The historical struggle is specific, conflicted, and framed as exploitation versus moral or human values. The struggle becomes tangible as well as metaphorical as it devolves into evil versus good. 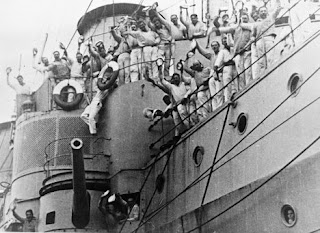 A similar interpretative pattern follows "Battleship Potemkin" (1925), which tells the story of a naval mutiny in 1905 in the seaport of Odessa. Here, again, the mutiny is framed in terms of exploitation -- the sailors are the victims, and their officers enrich themselves by providing bad food rather than decent provisions. One sailor, Vakulinchuk, assumes leadership role and is the catalyst for the mutiny. His death in the struggle makes him a martyr for his fellow sailors and the sympathetic population of Odessa.

In "Alexander Nevsky" (1937), a 13th century narrative, the main character is Nevsky, a prince of the Russian back-country. In the east, Russia is under attack by the Mongols; in the west, the Germans have invaded the Ukraine. Nevsky, having already defeated the Swedes, is a natural leader. He chooses to defend the city Novgorod against the advancing Germans. Nevsky is good and strong; his people are simple, virtuous and dogged, both men and women. The Germans, aided by Russian opportunists, are authoritarian, cruel and evil. Once again the interpretation is a struggle between good and evil, and the characters are archetypal rather than realistic.

In each of these films, the conflict is elevated to momentous proportions with considerable historical implications. It seems as though Eisenstein wanted to point out that history is created out of such struggles. At no point does Eisenstein suggest a more benign view of the historical process. Its all about conflict. 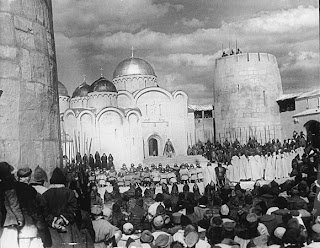 Eisenstein uses powerful images of the beauty of the sea and the seaport of Odessa in "Potemkin." These images imply a certain tranquility, a quality for sailors and the civilian population. The land is even more powerfully evoked in "Alexander Nevsky," where the rural imagery is of wheat fields, with ship-masts in the foreground and the bountiful sea in the background. In all the rural images, the sky is endless and dominates and dwarfs humans. The urban images are different. Bustling and brimming with religious iconography, the city represents physical protection rather than spiritual sustenance for its inhabitants.

Cities are power centers important to Russia but also its enemies. That sense of power and potential protection is how Eisenstein choose to present the city in "Alexander Nevsky." Eisenstein's power as a visualist and a transformative director is best illustrated in these images.

Editing can shape how we experience narrative events. Few directors have considered editing to be a source of power in film-making, but Eisenstein recognized its power and developed many of the ideas still used today regarding the use of pace, rhythm, and cutting to add emotional impact. Both the Odessa Steppes sequence in "Potemkin" and the Pskov massacre sequence in "Alexander Nevsky" have a sngle goal -- to shock and outrage the audience through his portrayal of  the unjust behavior of the Czarist forces and the German forces.

Eisenstein wanted to illustrate the misuse of power, its inhumanity, and the worthiness of using power to crush injustice. In both sequences, creating emotional arousal and outrage were his goals. The Odessa Steppes sequence introduces the future victims, the innocents who are enjoying life when the Cossacks attack. The grandmother, the intellectual, the grand-daughter, the peasant mother and her son, and later the well-to-do mother with her baby carriage are all introduced through mid shots. Although each of these characters later becomes a victim, Eisenstein particularly focused on the deaths of the mother and their children. 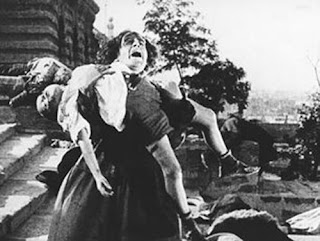 Detailed in the close-up are the shooting of the high-spirited son, the peasant mother's shock, her raising the boy's body and appealing to the soldiers to stop, her death, the shooting of the other mother, the command, the baby carriage's descent down the steps, the baby, the Cossack raising his sword, and the killing. The two mothers are the ultimate victims, and watching their efforts to save their children is the equivalent of seeing our future being stomped out; these scenes are shocking for that time and overwhelming. Rhythmic montages or other visuals that oppose each other further deepen the sense of conflict and victimization.

Conflict is at the core of Eisenstein's narratives, but it is hope that Eisenstein embraced -- the hope that good can overcome evil, and when it cannot, then at least understanding and compassion can be extended to a man who has experienced so much evil in his life that he has become its ultimate victim.

This was quite informative!! Well done