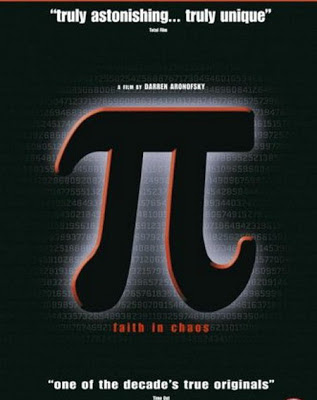 Pi is a mathematical notation, which is commonly used to represent the ratio of the circumference of a circle to its diameter. The letter 'Pi' is taken from a character in the Greek alphabet roughly equivalent to the English "p." Pi also represents the complex, chaotic world of mathematics. Has there has been any movie to interpret this composite world of number theory? Director Darren Aronofsky's (Requiem for a Dream, Black Swan) debut feature "Pi" (1998) fulfills that requirement; a film full of turbo-charged visuals that takes us inside the head of a human calculator.

Greek philosopher and mathematician, Pythagoras was one of the pioneer to postulate that numbers underlie the meaning of the universe. Since then, aspirational mathematical geniuses have sought a theory of everything in numerology. This black and white, low-budget sci-fi movie delves into this quest. It blends in questions about God and infinity with the personal struggle of one man to regain control of his life."Pi" is also only recommended for the most daring movie-goer given its arcane subject matter and its claustrophobic feel.


Plot
Maximillian Cohen (Sean Gullette) is a mathematical brainiac who suffers from blinding migraine headaches. He reasons that everything can be understood through mathematics and he wants to understand everything. He is preoccupied with unlocking the chaos of the stock market by decoding the numerical pattern that holds it all together. Max thinks that the notation 'Pi' -- he knows it contains 216 digits -- is omnipresent. He founds the notation, hiding in everything from stock prices to religious texts. 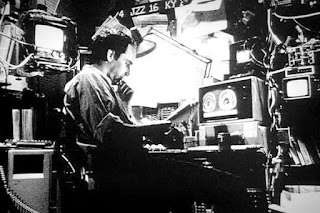 Max soon finds himself wanted by ruthless corporate types, like Marcy Dawson (Pamela Hart) of a New York brokerage firm. He is also sought out by Lenny Meyer (Ben Shenkman), a Rabbi, who believes his figures and final answer will be a communication route to God. Even though, many people are interested in Max's quest, the only person he has time for is his teacher and mentor (Mark Margolis). Max's brilliance in mathematics, however, comes at a price. He is in a bizarre state of consciousness, and, on one occasion, discovers a brain lying on the ground in a New York City subway station.


Analysis
If "Pi" sounds like a lot of bragging ideas for a 85 minute movie, that's why it succeeds. It doesn't go extremes in explaining the specifics of the equations or formulas. Director Aronofsky engulfs us in Max's world. He has written the script under the assumption that the viewers may be interested in a "thinking-man's" thriller and the movie is not traditional in any way. Shot in black and white on a $60,000 budget, he has used the spiral as a image system to great effect in repeating motifs of Max's self dialogue and increasing drug use. Aronofsky's surrealistic nods to David Lynch's "Eraserhead" are also evident in the explorations. 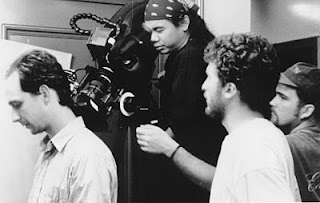 The inspired storytelling in 'Pi' is ingenious in its infinitely complex concepts that are somehow still accessible and fascinating. It is a film is a movie about nothing but mathematics, and yet it's so hypnotic that it welds you to your seat, eyes locked on the screen. The movie, right from the first frame, leads us to a very strange place, and I'm particularly impressed with the economical means, both financially and artistically, by which Aronofsky gets there. The performances are mainly solid are throughout the movie, with Sean Gullette portraying an cinematic loner. He gives a one-note performance which totally sells the sublimated passion of genuine intellectual obsession. 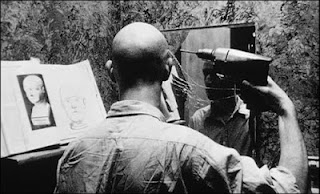 Although the movie is quite complex, the message is a quite simple one: life does not fit into neat patterns, and complete control is impossible. It also works as a perfect character study of an obsessed individual whose single-minded goal blinds him to everything else, including health, friendship, love, and even sanity. In the end, "Pi" does manages to drive home some thought-provoking questions about our digital age, numerology, and the hubris involved in all projects designed to decode the mystery of the universe.

"Pi" is the cerebral, minimalist, Kafka-esque thriller, which is pure and unadorned. This movie is a lesson to aspiring movie-makers everywhere.

Wow, looks like an awesome movie. Thanks for the review, will check it out. :)

This does seem like an interesting movie... Waiting for your thoughts on Life of pi.