The Illusionist - A Bittersweet Tale 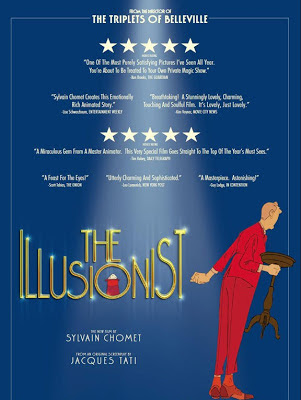 Jacques Tati was a French national treasure. He was known and loved by movie-goers all over the world for his comic alter ego, Monsieur Hulot. The legendary Tati's "Hulot" is considered to be a character, which succeeded Charles Chaplin and a predecessor to Mr. Bean. His universal classics like, "Mon Oncle", "Playtime", "Hulot's Holiday" has a poignant humor and exquisite images. Sylvain Chomet's animated feature "The Illusionist" (2010) was made from one of Tati's unproduced screenplay. The script was meant for live action (presumably for Tati himself), but Chomet turns it into a adorable appreciation of Tati and a bittersweet look at the end of the 1950s, before entertainers like the magicians and comedians were displaced by rock bands and other more visceral acts.

The movie is about a gradual professional decline of Tatischeff, a veteran magician in 1959 Paris. He is always in an odd magenta suit and moves from gig to gig with a rabbit, his top hat, three-legged table and wine glasses. He travels from Paris to London with no success, then travels north in search of a livelihood. In Scotland, Tatischeff captures the fancy of the establishment’s young maid, Alice. She tags along and they visit Edinburgh. They have a father-daughter relationship in a  boarding house for performing artist, where his gigs and stages get smaller and smaller until, finally, he's doing tricks in a store window.

His talent is not in question, but around him there are signs of the approaching rock bands, most evident in the upstaging swaggering of a group of peacocks called Billy Boy and the Britoons. The post-war European society wants something different, something he's unable to provide. However, Tati buys Alice nice shoes and coats. And their relationship is chaste and mostly wordless. In the end, Tatischeff's deepening sadness prompts him to insist that "magicians do not exist."

Director Chomet is previously known for his astonishing Oscar-nominated debut "Triplets of Belleville." In his first animated film, he made gentle fun of the Tour de France cycling race, whereas "Illusionist" pays homage to the Scottish capital with dreamy, layered cityscape that drizzle rain and charm. Chomet and his animators' 2D animation style adds nostalgic, emotional chords between the gently funny bits that color the illusionist's offstage struggles. The tribute paid to Tati in "Illusionist" is mostly a bittersweet one. We don't get much of the real Tati -- his real gift for physical invention -- and yet the film's softly stylized caricature nabs his ungainly grace and wordless shades of emotion.
Chomet places the Illusionist in a magical bygone era of Europe that owes as much to Hayao Miyazaki as to Tati himself. He also fills the film with other comical caricatures, each with a clear-cut appearance and lively set of idiosyncrasies. Apart from few amusing sound effects and a bewitching piano score, the movie has hardly any dialogues. So, The Ilusionist rewards only the patient viewer. It offers long stretches where heedful viewers will notice the many amusing and absurd touches that Chomet and animation team have carefully sketched in.
"The Illusionist" is a rare work of art that salutes and pays homage to old-time entertainers at a time of 3-D and digital dominance.
Trailer
The Illusionist - IMDb
at February 25, 2013
Email ThisBlogThis!Share to TwitterShare to FacebookShare to Pinterest
Labels: Feel Good Movies, Magical Realism

This one is pending from a long time. I have so many movies in watch list :) I hope to see them soon

Another wonderful review!...I am happy to see something different

one of the best movies ever to be made .. nice review!

Good review. Need to see some of these movies with original content, as I have stopped watching the lousy bollywood movies of late.