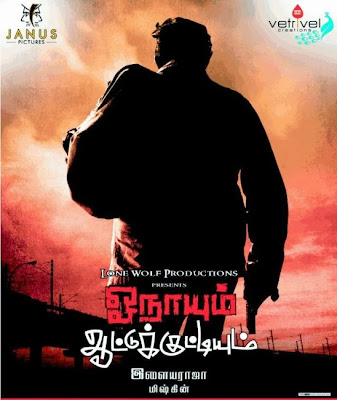 Japanese master film-maker Akira Kurosawa subtly places human codes of behavior by ruthless animal passions.  Erratic Japanese art-house movie-maker Takeshi Kitano is best known for his long, tranquil shots and the violence jumps at the audience from those tranquil shots. Tamil director Myskin, in his own way has derived those styles (he has openly declared the influence of these East Asian masters) and is delivering some unique narrative traits and camera movements. After the disastrous, ludicrous film “Mugamoodi”, he has now redeemed himself with a dark, metaphorical, philosophical thriller titled “Onaayum Aatukutiyum” (Wolf & Lamb).

Indian movies are less riddled with metaphors and more infested with buffoonery.  Serious cinema comes out only after recurring intervals of mindless comedies (we mostly name serious film-makers as ‘psychos’). So, for a movie-lover Myskin’s new film is a blessing. It engages us, stirs our thoughts and largely treats cinema as a poetic language. It also has a robust script and excellent characterization (even for the extras).

“Onaayum Aatukuttiyum” begins with the director’s trademark, top angle shot. A shot down guy runs into this shot, dropping down half dead. A medical college student Chandran (Sri), late at night, comes across the man with bullet injuries and hikes him up on his bike and travels to a hospital. The lethargic staffs refuse to treat and ask him to inform the police. Languor awaits him in the form of policemen and so he destines to save this man by taking him to his house. Chandran performs a minor surgery and revives (or redeems) the man.

When he wakes up in the morning the mysterious man is nowhere to be found. He has dropped out without a vestige. When CID officers knock at Chandran’s home, all hell breaks loose. He and his brothers are taken into custody and were excruciatingly enquired. The man, who Chandran helped, was known as ‘Wolf’ (Myskin), a paid killer who is wanted by the police for 14 murder cases. Few days later, Wolf resurfaces and tries to connect with Chandran. It leads to an inebriating chase, which also give us time to marvel at the metaphors.

Camerawork and music intensifies the film, while dialogues are a formality (except for narrating a woeful story). The background score by quintessential composer Ilayaraja is eccentric as well as restrained, confining itself perfectly to the story. You can’t imagine this film without the breathtaking, anxiety-infusing orchestrations. Cinematographer Balaji Ranga’s delineated outlook of nighttime Chennai is etched with grey and blacks. Myskin’s shot composition is more than perfect. Many wordless short stories are conveyed through those frames.

The close up shot (that includes a burning candle), where ‘wolf’ explains the reasons behind his actions is impeccable and a testimony to Myskin’s fervent acting skill.  As the bewildered medical student, Shri gives an engrossing performance. All the self-centred and selfless policemen are characterized very well.  “Onaayum Aatukuttiyum” has a wafer-thin storyline, but, the script makes up for it. The way Myskin narrates the back-story is unique and riveting, but the story isn’t. The villain and his henchmen’s antics stick out like a sore-thumb. The sword-fighting scene and characters bowing their heads in shame at mere insults are Myskin movie clichés.  However, the vigorous screenplay makes us overlook these clichés and flaws.

Myskin’s movies are purposefully bleak and cynical. They offer us a cityscape that is filled with predators. But, somehow his endings are hopeful and redeeming. The nefarious guys are given some chance to look back at their mistakes. The line between good and bad gets blurred at times. In this film too, we can’t ubiquitously categorize the internal characteristics of a person as wolf and lamb. It says even a murderer could redeem himself through a simple act. We might not like or oppose his view, but at least he has a view point.

Myskin, once again proves his mettle through this well-made slick thriller. “Onaayum Aatukuttiyum” is a breath of fresh air among Tamil cinema’s gagging gags.