Hacksaw Ridge [2016] – Perseverance in the Midst of Chaos and Carnage 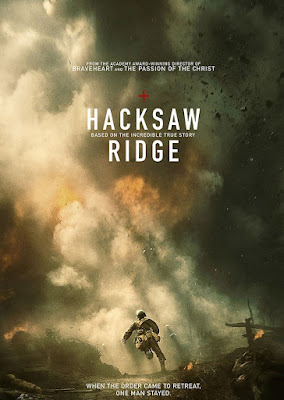 Mel Gibson’s Hacksaw Ridge (2016) tells the true story of Desmond Doss (1919-2006), an American medic and pacifist, who have vowed to not touch a rifle. His saintly activities at the Battle of Okinawa (at a cliff called ‘Hacksaw’) made him the first conscientious objector to receive the ‘Medal of Honor’. It’s easily understandable why Mr. Gibson is fascinated by the tale of Desmond Doss. The actor-turned-director has previously made four feature films, which were all about men in conflict. Except for the directorial debut ‘The Man without a Face’ (1993), all his other three films are about redeeming themselves from the brutality or literal violence around them. In this path to possible redemption, the men are in conflict with their own selves and also confront an overwhelming external conflict. Mel Gibson’s men eventually learn to face these conflicts by enduring suffering (or by clinging on to the roots of their beliefs). For the most part of Hacksaw Ridge, Mel Gibson’s camera scrutinizes the inner pain, stirring on the face of Andrew Garfield’s Doss. The camera stays with him in the moment Doss lets out all his repressed pain as well as the moments he silently bears the pain. After Doss’ magnanimous act, his view becomes the camera’s eye. As fatigued Doss walks among his fellow soldiers, they shuffle across, watching him with amazement as if he is the son of God who had just performed a miracle. This evolution lies at the center of Mel Gibson’s directorial ventures.

But still Gibson’s works often only scrapes the surface. It looks daring and emotionally resonant, but if you scratch beneath the surface, it all seems too conventional. Nevertheless, it’s not necessary to be bothered about this factor because Gibson’s skin-deep structures are so compelling and lively to experience. Is Hacksaw Ridge one of the best modern war movies? Definitely not. It’s a fairly engaging war movie with some interesting visualizations. The movie opens with sepia-toned visuals of an idyllic small town in Virginia. Desmond T. Doss is first seen as a little boy climbing ridges with his brother and getting beaten by his drunk, war veteran father Tom (Hugo Weaving). Kid Doss, in one of the fights with his elder brother, beats him with a brick and nearly kills him. He is stunned for a moment, contemplates what he has done while looking at the illustrated copy of Ten Commandments. The seeds for peace and non-violence are sown at the moment. 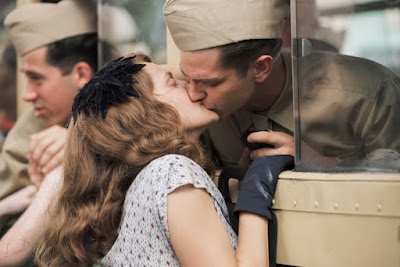 Grown-up Doss (Andrew Garfield) woos a beautiful nurse Dorothy (Teresa Palmer). His sincerity and serenity attracts her. Later, the faith Doss has developed over the years is put to real test when he enlists with a desire to serve as noncombatant medic in World War II. The men of his division are the usual military kind we see in films: macho but inherently vulnerable. Doss soon becomes the subject of thrashings and mockery since he objects to train with a rifle. Sergeant Howell (Vince Vaughn) and Captain Glover (Sam Worthington) create hell for Doss to discharge him from the military. Doss endures the test (“With the world so set on tearing itself apart, don’t seem like such a bad thing to me to want to put a little bit of it back together”, enunciates Doss). While others do the killing, he saves lives in the battlefield. After winning the conflict within himself, Doss is compelled to prove the strength of his faith, on the face of a bigger, external conflict. He climbs up (using cargo nets) to Hacksaw Ridge (aka Dantesque hell) as a mere liability and climbs down as the hero he’s destined to be.

Director Mel Gibson is at his best when he expresses Doss’ internal conflicts through external factors. The jail cell seems to be stand-in for Doss’ imprisonment of the self due to his rigid beliefs. Gibson’s directorial prowess becomes more evident in the meticulously choreographed battle of Okinawa. In the initial battle scene, the smoggy wasteland is shown to be littered with shredded limbs and rat-chewing rotten corpses – an effective scene to portray the horrors of war. The images of Doss roping down wounded soldiers over the ridge and running back into smoke, repeating the words ‘please God, let me save one more’ were some of the strong emotional moments; a brave man holding a little source of light to win over the darkness.  But I felt some problems with the unrelenting onslaught of violence in the second-half. Apart from the disorienting initial battle scene, the violence on-screen has a cinematic quality. The flamethrowers and the shells set upon the Japanese indulge a lot in the intense, cinematic bloodshed (the Japanese are more or less portrayed as zombies than as human beings). The violence in the later part almost becomes a spectacle (contrary to Gibson’s intention). Some of the blatant symbolism (Doss’ washing off the blood; Doss holding on to bible juxtaposed with a Japanese general committing harakiri, etc) too reduces the otherwise impressively balanced direction. 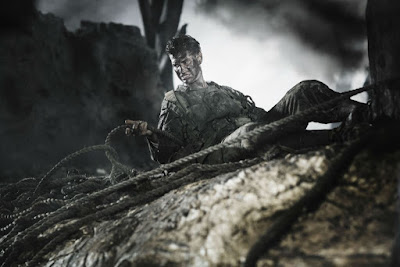 Robert Schenkkan and Andrew Knight’s script is full of broad characterizations, but essentially involves in Doss’ experiences and conflicts. The script does its job to get across the messages involving perseverance of human spirit, faith, and divine inspiration. As I mentioned earlier, there are no profound moral contradictions waiting to be unearthed. The ensemble cast, full of familiar faces does an excellent job. Vincent Vaughn efficiently channels-in the energy and intimidating wit of Lee Ermey’s drill Sergeant Hartman (from Full Metal Jacket). Andrew Garfield is excellent in making Doss more than a do-gooder. He earnestly lays bare the character’s conflicts before showcasing his utter conviction.

Hacksaw Ridge (138 minutes) is an ennobling tale of a pacifist, who refuses to touch a rifle in the battlefield except to make a make-shift stretcher. It immerses us in the chaotic madness of war, despite the occasional propensity for tiresome myth-making.