The Paper [1994] – A Facile yet Delightfully Energetic Newspaper Movie

Ron Howard’s The Paper (1994) centers on 24 hours in the life of the Sun, i.e., The New York Sun, a fictitious New York tabloid which like any traditional newspaper is torn between idealism and sensationalism. The script was written by popular Hollywood screenwriter David Koepp (Jurassic Park, Mission Impossible, Spiderman, etc) and his brother Stephen Koepp, a veteran journalist and the senior editor at the Time magazine.The film opens with two African-American youths stumbling across a crime scene – the brutal murder of two white visiting businessmen – in a tough neighborhood. 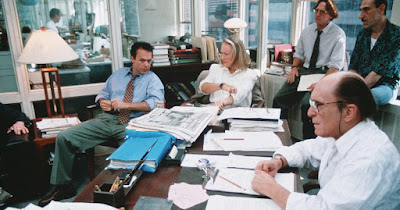 The next day New York Daily News’ headlines screams: “Welcome to New York – You’re Dead”. But the Sun’s front-page story is only about a corrupt parking commissioner. The narrative then follows the hyper-active, overworked protagonist, Henry Hackett (Michael Keaton), the paper’s assistant editor, battling the hubbub of newsroom to work on a juicy tip that the black youths are innocent.

The Paper is an old-fashioned newsroom drama which despite opening with a bloody crime scene and a wrongful arrest keeps a buoyant, light-hearted tone. Much of the humor arises from the barely controlled chaos that threatens to topple over Henry’s professional and personal life. The round-the-clock newsroom pressure is clearly getting to Henry as his very pregnant wife, Martha (a zippy Marisa Tomei) demands him to take the steadier 9-to-5 job at New York Sentinel. In fact, the interview for the job is also scheduled that day.

Martha herself was an ace-reporter, and dreads the feeling of putting her career on hold in order to rear the child. At work, Henry Hackett has to put up with a motley bunch of eccentric people, from the world-weary, chain-smoking editor-in-chief, Bernie White (Robert Duvall) to a paranoid, bellyaching, gun-toting columnist, Dan McDougal (Randy Quaid). 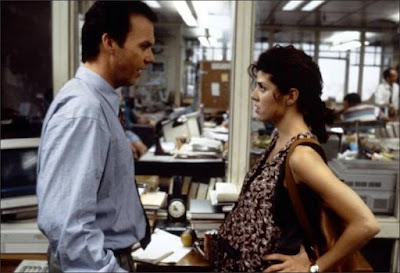 However, Henry’s chief rival at work is the ambitious and condescending managing editor, Alicia Clark (Glenn Close). Alicia doesn’t receive any of the newsroom camaraderie Henry enjoys. But Bernie declares that being in the management side, if Alicia liked by the reporters then she’s not doing a good job. Henry and Alicia are at each other’s throats upon deciding how to headline and pursue the two black youths’ story. Alicia argues that the lead story for next day should be the subway derailment, or else they could get the pictures of the black teenagers and run a screaming headline, “GOTCHA!” Hackett argues for doing a follow-up on the murders, and sends his reporters to dig-up more about the case, based on a tip he receives from an interesting source.

In between, Henry escapes from the hothouse atmosphere of the Sun to attend his interview at the prestigious Sentinel. The top guy at the paper (Spalding Gray) refers to Sentinel as the beacon of journalistic integrity, and patronizingly dismisses Sun as ‘the cute little paper’. Henry seems to be fiercely loyal to the Sun, since that comment only pushes him to steal a ‘tip’ regarding the bloody double murders that incriminated the black youths. More than loyalty, the narrative also makes it clear that Henry doesn’t want to step into the bigger, labyrinthine reporting world of Sentinel. To add more emotions to the story, Koepp also shoe-horns a sentimental subplot involving cancer-ridden Bernie and his estranged daughter, Deanne (Jill Hennessy). 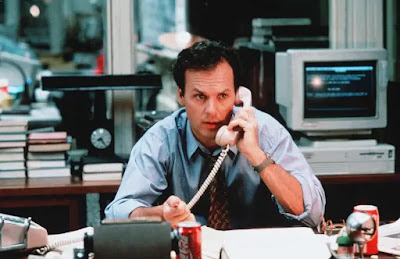 Though The Paper is less mawkish than your average Hollywood drama, it does withhold clichés, too neat outcomes, and a bit false character trajectory. The script is slyly sexist, especially in its treatment of obdurate Alicia and a bumbling photographer (Amelia Campbell). Moreover, the narrative didn’t delve into any social issues it was discussing: racial profiling or luridness of tabloid journalism. Nevertheless, the Koepp brothers do get lot of things right: the tabloid newsroom lingo, the bedlam environment (even the air-conditioning repairmen add to the clutter), a journalist’s stress of juggling between multiple responsibilities, the pullulating cynicism, and insensitive wisecracks (foreign crises only matter if New Yorkers are personally involved).

The film also largely works due to Ron Howard & cinematographer John Seale’s dynamic staging of the intense 24-hour period. The director totally cocoons the viewer into the world of ‘chasing-deadlines’ journalism. Howard uses the spirited performances of a wonderful ensemble cast to perfectly toggle between tension and humor. Furthermore, Howard’s touch gives a more heartening sense to the sentimental aspects which is one of his strengths as witnessed later in films such as Apollo 13, A Beautiful Mind, Cinderella Man, and Rush.

Overall, The Paper (112 minutes) is an eventful, fast-paced, and upbeat Hollywood ensemble drama set in a busy newsroom.

at October 31, 2021
Email ThisBlogThis!Share to TwitterShare to FacebookShare to Pinterest
Labels: Hollywood Movies