At dawn one morning in Melbourne, police force led by Detective Sergeant John Steele (Tony Martin) bust into an apartment of a middle-aged man, who is slumbering in his recliner surrounded by stack of news papers, gold fish bowl, and other miscellaneous things. Detective Senior Constable Wayne Prior (Aaron Jeffrey) holds a gun to the man’s head and humiliates him. After searching the premises, the police bag up certain items and take the man to the station for interrogation. He is driven across town to the police station and thrown into a dank interrogation room.

The man named Eddie Fleming (Hugo Weaving) is jittery and pertrified, giving us the vibes that he is possibly a harmless loner harshly subjected to police brutality. To accentuate such line of thinking, the Senior Constable Wayne does his best (or worst) to establish himself as the ‘bad cop’, while Detective Steele scalds Fleming with his sinister looks, mildly channelling the desperation of a cop pressured to zero-in on a suspect. But what’s the case and why Steele is so sure that the bewildered Fleming as his guy? 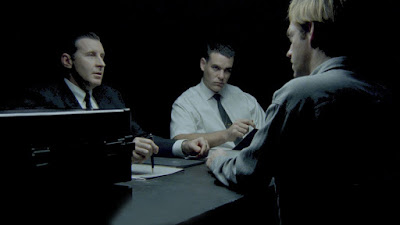 The notion that an innocent man has found himself behind the iron curtain of a twisted police investigation is what offers the initial hook in Craig Monahan’s debut feature The Interview (1998). The film is dubbed as Australia’s answer to The Usual Suspects (1995), although The Interview doesn’t simply rely on an earth-shattering twist at the climax. Writer/director Craig Monahan’s treatment is more concerned with the wily techniques employed by an investigator to ensnare their suspect. It deals with deeply complicated bureaucratic conflicts and how the world of criminal investigation really works.

Unlike Bryan Singer’s The Usual Suspects, this film is not just one long story of how a seemingly innocent man manipulates his surroundings. The manipulation exhibited here is multi-layered and not one-sided. Moreover, like many contemporary crime dramas, The Interview doesn’t keep throwing twists to gratify the unsuspecting viewers. It is very much grounded in logical reasoning and simply uses the unprecedented narrative developments to smartly challenge our perceptions. 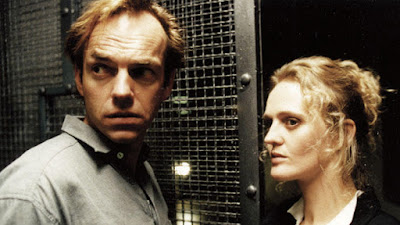 The Interview unfurls over a single day as the Detective Sergeant and Senior Constable interrogate Fleming for hours to stick their single charge upon him: car theft. That seems a too simple a charage to go through the trouble of breaking into a guy’s apartment. Initially, Fleming outright dismisses the charge and the vulnerability expressed by his eyes makes us feel sympathy for him. The car belongs to a Mr. Beecroft who has gone missing. Fleming explains that he is living on the dole. He has lost his house and estranged from his family. He laments that the police is doing this because no one cares about him. But Steele has his reasons to trap Fleming, and of course he believes more crimes are waiting to be unearthed if he proved the car-theft charge.

Elsewhere, the observer is being observed. Steele and Wayne are under the scrutiny of Internal Affairs due to the duo’s questionable investigative tactics. More hints about a wider ring of corruption within the force are also cited. These sub-plots play a crucial role when Fleming begins to say shockingly extraordinary things. Revealing more details now would only spoil the neat tricks aligned by Monahan.

The expertly evasive script written by Monahan and Gordon Davie (an ex-cop) is blessed with the intricate knowledge of police institution. The writing understands the art of reveal, where the transformations of characters are imbued bit by bit. Both Weaving and Martin’s characters begin as one-dimensional archetypes but gradually evolve over the narrative. The precious information are doled out in a manner that constantly makes our sympathies switch from one side to another. Amidst all this, the writers haven’t neglected the plausbility of the situation. All the bureaucratic in-fighting and tense cat-and-mouse games are executed with a firm understanding of the technicalities of criminal investigation.

Shot in a darkly-lit, claustrophobic chamber-like room and a huge table, pitting the accused against his accuser, the film could have easily become monotonous or evoke the feeling of watching a filmed stage play. But Monahan’s inventive and precise directorial skills generate a deeply atmospheric tone right from the opening scene, i.e., when Simon Duggan’s camera starts exploring the physical space of Fleming’s apartment with its fishbowl and white curtain. He particularly keeps the imagery dynamic throughout the heated conversations between Weaving and Martin. Eventually, the pivotal dynamics established between these two actors further strengthens the impressive efforts behind the camera.

Eddie Fleming is undoubtedly Hugo Weaving’s best performance, alongside Proof (1991), The Adventures of Priscilla, Queen of the Desert (1994), and the scene-stealing turn in The Matrix franchise. Weaving’s alternately teasing and appealing behavior works as the perfect portrayal of a man who could be either guilty or innocent. Tony Martin as the no-nonsense detective is equally brilliant. Altogether, The Interview (104 minutes) is a riveting thriller built around a complex, perception-shifting narrative and an enigmatic protagonist.

at August 04, 2021
Email ThisBlogThis!Share to TwitterShare to FacebookShare to Pinterest
Labels: Films from 'Down Under', Thriller