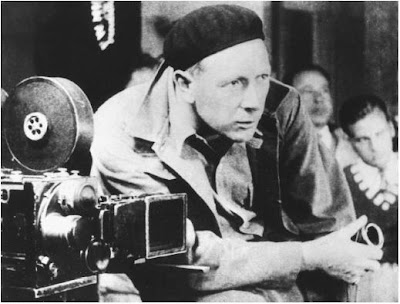 Friedrich Wilhelm Murnau, an innovator, an expressionist, was one of the most influential film-maker of the silent era. He was born on December 28, 1888 in Bielefeld, Germany. His actual birth name was Friedrich Wilhelm Plumpe. Plumpe had diverse and artistic upbringing, which naturally had a profound effect on the way he viewed the world and expressed himself. His brother Robert Plumpe describes his passion for reading, saying that, “As soon as he could read he fell on every book that came his way, whether it was a novel or a classical drama.” He studied art and literature history and served as a combat pilot in the First World War.

Even at an young age, he staged plays with his brothers and also constructed his own theater. His passion for the stage plays directed him to join a new theatre school founded by Max Reinhardt. Reinhardt was mostly a theater director, but his his innovative ideas about lighting, set design, and continuity had a huge impact on Murnau’s films.The qualities of a stage play evidently inspired the young Murnau as he strove to create a similar type of “symphonic” unity in his films, controlling every step of the process from screenplay, to art direction, to editing. In the early 1920s, he joined the expressionist movement that took root in German cinema.

The political and social unrest in Germany following the first world war resulted in the expressionist movement. The horrors of battles brought about an sense of insecurity and disillusionment. The expressionist films served as allegories combined with the mysticism and folklore. It served as an alternate to the mere facts of 'Naturalism' and 'Romanticism.' The use of hyperbolic artificial sets, dramatic lighting, shadows, graphic effects, and emotionally effusive, gesture-filled acting are some of the elements of Expressionist films. From 1919 to his death in 1931, Murnau made a total of 17 films. Only 12 are said to be survived of the 17.

The first most famous of Murnau's work is the adaptation of Bram Stoker's Dracula, by the title "Nosferatu." The film adaptation caused Stoker to sue Murnau for copyright infringement. All prints of the film were ordered destroyed after Murnau had lost the lawsuit. Only the bootleg prints were stored and preserved over time, so that Nosferatu is now available all around the world. Murnau made an first-class use of shadows and silhouettes in Nosferatu to create the atmosphere of a creature belonging to another world and convey a paranoid sense of evil omnipresence. Starting with the screenplay Murnau was involved in every aspect of the film-making, as in all of his films. From the locations of the lights to the positions of the actors’ bodies was mapped out in advance, as none of those were in the script.

In Nosferatu, Murnau had a very definite feeling for camera angle and in the establishment of a macabre mood. Fritz Arno Wagner's cinematography was notably good, particularly a scene of frightened horses in the twilight and the close-ups of the architecture of the count's castle. Another form of pure cinematic resource is the projection of negative film on to the screen, which gave an effect of reversed values to the ordinary projection of positive. A curious feeling of lifelessness is obtained by the use of negative in this way. The decision to use genuine landscapes rather than studio-built sets was one of the important feature of Nosferatu. The realistic monolithic feeling of the landscape, shown in long, brooding takes, conveys a different kind of expressionism from the one achieved by artistically distorted sets in a studio.


Changing Fortunes of a Doorman

The bear-bodied Emil Jannings commanded the screen of F. W. Murnau’s brilliant silent film classic, The Last Laugh, which was made in 1924. The movie was most famous for its complete lack of inter-titles and for its reliance on film as purely a visual medium to tell its story. The film’s intense sense of humanity, reflected in both its careful attention to expressions and gestures as well as its use of deep focus conveys a sense of reality within which Murnau presents an upper and lower class seemingly on the same footing. The genius and chemistry of the Murnau-Jannings accompanies this pure artistic film.

The Last Laugh established the film as an independent medium of expression. It was a remarkable example of filmic unity, of centralization of purpose and of perfect continuity. By psychological understanding, every action suggested a thought to the audience, every angle a mood that was unmistakable in meaning. The Last Laugh was cine-fiction in its purest form; exemplary of the rhythmic composition proper to the film. This film was followed up by Tartuff (1925). It had the same production team and is memorable for its simplicity. The scenario was again by Carl Meyer; the camerawork by Karl Freund; and the architecture by Walter Rohrig.


From the acting standpoint Tartuff was a remarkable example of harmonious talent, typical of German completeness. The viewer could feel that there was an underlying current of humor running throughout each sequence, a humor that was not without its vital dramatic moments. Tartuffe constituted Jannings' third portrayal of comedy. The atmosphere that surrounded the film and its characters is of simplification, of graceful curves, and wonderful detail of plaster and iron work. There was no customary over-decoration. Unnecessary details was eliminated to the better effect of the mass.

After the year, 1925, the German cinema, to which students of the film were looking for further progress, began to decline, largely on account of the general exodus of talent to Hollywood. The art film, for which Germany had built herself a reputation, was a commercial failure. The superb efforts of German creative directors drained the coffers of the industry, an unfortunate but indisputable fact. The tone of German films was on a grand scale, at once serious-minded and splendid, far from the superficiality of the American movie to which audiences were accustomed.

Murnau's last film in Germany before he accepted the Fox contract in Hollywood, was a realization of Faust. This film may be again taken as a consummate example of German craftsmanship. Every detail, every mass, every contrast of light and shade emphasized the medieval atmosphere. Working in collaboration with the screenwriter Hans Kyser, Murnau mixed Faust’s script from German folk legend. Faust’s is a classic tale of a man who sells his soul to the devil. In an endeavor to gain control of the Earth, Mephisto (Emil Jannings) bets an angel that he can corrupt the soul of the elderly professor Faust. Mephisto towers over Faust’s hometown and unleashes a plague that spreads amongst its inhabitants. Faust, unable to heal the citizens who are dropping dead around him, renounces both God and science invoking the aid of Satan through a mysterious book that he chances across.


The Mephisto of Jannings was completely delightful, the essence of refined, subtle humor, of mischievous trickery and inimitable devilry;  Faust in 1926 and Fritz Lang's Metropolis in 1927 marked the beginning of the end of an important era in film history. The trademarks of German Expressionism are visible even in the opening sequence of Faust. The movie begins with a groundbreaking special effects (for that time) -- a dramatic, mist-filled battlefield between Mephisto, Four Horsemen of the Apocalypse and a heavenly angel. Murnau shoots this scene from a low, cockeyed angle, which distorts perspective and heightens emotions. (Innovations like this from German Expressionism have become a tired basics of horror movies and music videos). Like Nosferatu, shadows and lights acts as participant in the action, and enhances character's supernatural qualities.

Murnau went to Hollywood at the invitation of the Fox Film Corporation, who gave him authorization for his productions in their name. Mr. Fox also tried to persuade Carl Meyer, the brilliant writer of many German silent films, including Cabinet of Dr. Caligari, The Last Laugh to come to Hollywood. Mayer too accepted the Fox contract, but insisted on remaining in Europe to do the writing. Murnau's first Hollywood movie, Sunrise: A Song of Two Humans, was a brilliant fable about a man and wife struggling though a very dark moment in the marriage. Under a hypnotism of a Woman from the city, he listens to a plan to drown the young wife, sell the farm and go off to the city. In Sunrise, Murnau has tried to crystallize with dramatic symbolism those conflicts, adjustments, compromises and complexities of man-and-woman mating experiences that ultimately grow into an endearing union.


Almost all of the movie was filmed in a studio, parts of which were transformed to represent the Man's farm, the nearby marshes, the city, and the amusement park. A scene in which an image of the Woman from the City tempts the man with her caresses were all done "in camera" rather than using post-production techniques. The most daring of Murnau's tracking shots occurs early in the movie as The Man wanders through the fens to meet his lover. Without a cut, the camera follows him then switches to his perspective. Sunrise won three academy awards, including 'Best Picture.'

Murnau's second picture for Fox, was The Four Devils, a story of the circus ring, which was said to be mostly an uninteresting film. His next film, City Girl, modified to adapt to the new era of sound film was also not received well. Both these movies has also been completely lost. The poor reception of these movies disillusioned Murnau, and he quit Fox to journey for a while in the South Pacific. Murnau travels in the pacific resulted in his last film, Tabu: A Story of South Seas. This movie was heavily censored in America because it showed images of bare-breasted native Polynesian women. The filming of Tabu had consumed Murnau's financial resources, even though Paramount pictures brought the film and offered a ten-year contract.

Murnau didn't see the premiere of his last film; he died in an automobile accident in California on March 11, 1931. Murnau was laid to rest in Berlin. Artists like the Robert Flaherty, Emil Jannings and Greta Garbo attended the funeral, and the great German silent era director Fritz Lang delivered the funeral speech. It is hard to define and relegate the films of Murnau. He was a true Expressionist, and his ability to take all the tools and knowledge at his disposal and fuse them into a new universe and a new way of communicating through film is what made him a true auteur.

"I think films of the future will use more and more of these 'camera angles', or, as I prefer to call them, these 'dramatic angles'. They help photograph thought." [speaking in 1928]

The Last Laugh - Senses of Cinema

Faust - Senses of Cinema
at November 08, 2012
Email ThisBlogThis!Share to TwitterShare to FacebookShare to Pinterest
Labels: Masters of Cinema, Silent Cinema

Lovely & informative as usual..thanks for all these posts..they really enriching.