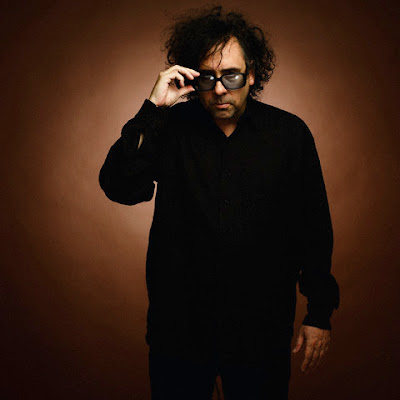 'Eccentric', 'macabre', 'self-confessed loony': Tim Burton and his movies have often been characterized in similar terms. Specializing in quirky subjects, off-beat images and the darker side of popular culture, Burton has established himself as a strong visual stylist, bringing a fascination for the ghoulish to the screen with flair, emotion and a certain sentimentality.

Burton sometimes give the impression of having stumbled into the business of making movies by chance -- the result of a childhood spent watching monster movies and experimenting with Super 8, followed by some lucky breaks working at Disney in the studio's period of turmoil following its founder's death. And though his films are off-beat, Burton is very much part of the industry, directing the distinctive, commercially successful films including Bettlejuice, Batman, Sleepy Hollow, Charlie and Chocolate Factory and Alice in Wonderland. An unexpected player, he has worked as director, producer and consultant across fantasy genres, in animation and live-action camera, in cinema and television.

Moreover, Burton has made his mark with both relatively intimate pictures (Edward Scissorhands or Ed Wood or Big Fish or Sweeney Todd or Frankenweenie) and blockbusters (Batman and its sequel or Alice in Wonderland). The critical success of Ed Wood or Big Fish, on the one hand, and the block buster or record-setting Alice in Wonderland, on the other hand, might suggest an opposition between personal and commercial projects -- a duality that has, of course, long been played out in writings around Hollywood.

As a highly visual, indeed surreal, film-maker, it is perhaps no surprise that Burton began in animation, or that his time at Disney wasn't the most straightforward. He made two short films there: Vincent, which used puppets and stop-motion animation to grotesque effect, and the live-action Frankenweenie, in which a boy rewires his dead dog Sparky. Though not widely seen in theaters, both films made an impact in terms of Burton's career: attracting a small-scale critical buzz and industry interest. The extent to which Burton's visual sensibility is somehow part of, but out of kilter with, conventional expectations -- like the perverse Christmas toys manufactured by the residents if Halloween town in Burton's spectacular holiday fable 'The Nightmare Before Christmas' (Henry Selick, 1993) -- was already evident in these early films. 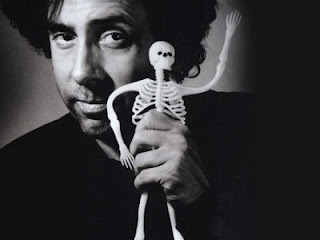 Nightmare Before Christmas was bizarrely rated PG, whilst Batman was criticized as too scary for children. Given this edginess, there was certain irony in Burton's finding an unlikely home for Ed Wood, his biopic of the cult cross-dressing director, with Disney's Touchstone. Of course, Burton has already returned to Disney to produce 'Nightmare Before Christmas', a project based on ideas and images he had initially developed whilst working at the studio (ideas which Disney therefore owned).

Although gaining only limited distribution, Frankenweenie helped get Burton his first feature: directing Pee-Wee's Big Adventure for Warners. As a relatively low-budget vehicle, the film was hugely successful commercially. The movie was in some ways as much a showcase for Burton as its star. Centered on Pee-Wee's child-man persona, the film has trademark gadgets, fantastic sets and comical special effects. Burton followed it up with 'Beetlejuice', another fantasy/comedy which employed self-consciously cheesy special effects and a wry sense of humor, and was, once again, a big box-office hit. 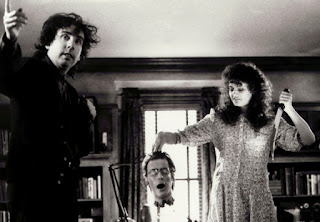 Beetlejuice follows Adam and Barbara Maitland as they haunt their former dream home, calling on the services of the comically gruesome Betelgeuse (Michael Keaton) to evict the yuppie family with whom they ultimately learn to co-exist. Winona Ryder's Lydia Deetz, feeling herself in tune with macabre, mediates between the film's different worlds. Lydia is one of a series of transitional figures in Burton's films. The easy use of effects, 'horror', comedy and sentiment -- and the profits -- finally convinced Warners to let Burton direct a major fantasy film in the shape of Batman.

Even before Batman's status as the event movie of 1989, Burton has acquired a cult critical following, with general and specialist fantasy-film magazines hailing his distinctive style. Of course it is in parts because of his background in animation and his immersion in fantasy genres that the design and aspects of Burton's films receive as much popular critical attention as themes or stars. This facet of work seems particularly interesting when set against a prevailing perception of contemporary Hollywood as effects-driven -- the supposed triumph of spectacle over thematic complexity or character development.

On one hand, this might be said to tally with Burton's typical operation at one remove from scripting. Yet it is both the total sense of visual design -- the way in which, for example, effects are integrated into the film image -- and the plain weirdness of the characters that command attention in the best of his films. From Beetlejuice's sandworm to the complex characterization seen in Nightmare Before Christmas, there is also both a raw quality and a sense of technical experimentation with the possibilities of animation and visual effects.


Moreover the effects and imagery are firmly integrated within the fantasy world, as in the comic.grotesque transformations of Beetlejuice or, rather differently, Ichabod Crane's dreams in Sleepy Hollow. There is a sense of design in operation. Some of this is undoubtedly down to ongoing collaborative relationships -- not only regular face such as Johnny Depp, but also producer Denise Di Novi, composer Danny Elfman.

Batman's tone was markedly darker than the typical late 1980's blockbuster. The film avoids either camp or parodic humor (of the later to be seen in his Mars Attacks!). Instead the film's humor stems primarily from the peculiarities of the scenario and its characters, from the Joker and even from Batman himself: as Burton notes, "it's a guy dressing up as a bat and no matter what anyone says that's weird." the budget allowed the construction of elaborate sets, used to full effect within the film's overall atmospheric visuals. Gotham's urban space is recognizable yet clearly fantastic in its mix of Gothic and modernity. Both Batman and Batman Returns situate Keaton as a misfit rather than conventionally heroic, closer to the enemies he confronts (Joker, Catwoman, Penguin) than to the mainstream world of Gotham society.

Though Batman Returns was extremely successful, it was Burton's last outing with the material as director. Warners simply felt his style was too dark and weird for the franchise. It was the success of Batman movie that made funding for a more off-beat project like 'Edward Scissorhands' possible. And though Ed Wood was a very different sort of film, it offers a similar, highly polished B-movie feel, right from its elaborately crafted credit sequence, which whisks us through a Gothic house.

Burton's images as eccentric and non-conformist couples an insistent antagonism towards the superficial appearance of normality and respectability with an interest in the freakish and weird in both every day life and popular culture. In turn his films embrace the truism of horror and fantasy fiction, that villains are more typically interesting -- certainly more complex -- than clean-cut heroes, bringing out in the process the sinister aspects of what passes for normal and potential beauty of what gets called weird. These themes are most explicitly visualized in Edward Scissorhands and literally embodied in the protagonist, whose half-finished physical state renders him an in-between, transitional figure. 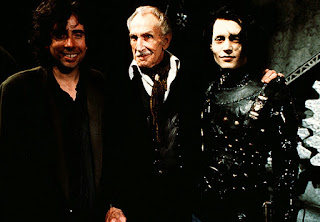 Themes of inclusion and exclusion are further mapped through the film's two worlds: suburbia, with its sunshine, color and social niceties, versus the Gothic of Edward's collapsing mansion on the edge of town. Edward's scissorhands allow him to create fantastical shape, but also render him dangerous; for cheerleader Kim (Winona Ryder), who narrates the story to her own granddaughter, Edward offers a sensitive contrast to her lumpen boyfriend. Ultimately, although the neighbor masses on the Gothic mansion in anger, the house isn't destroyed. In Frankenweenie (2012) the community realizes the error of its ways -- here it is simply deceived, with Edward and Kim returning to their two separate worlds.

The benign outsider is also central to -- Ed Wood, a character-driven ensemble piece that represented a significant departure for Burton. Structured around the friendship between and the washed-up, drug addicted horror star Bela Lugosi (Martin Landau), Ed Wood celebrates an alternative film community in which social misfits are funny, but not played for laughs. Although framed by Wood's cult status as a 'bad film-maker', Depp plays Wood as an upbeat, optimistic figure, almost a visionary -- his ecstatic cinema, lit up by the cinema screen or by the act of directing, serving as one of the film's recurrent images. 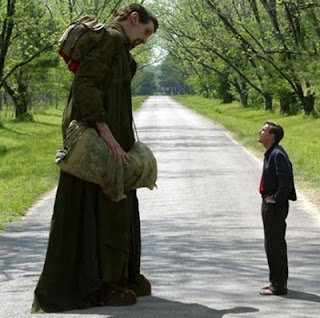 The outsider makes his appearance in Big Fish (2003) too as Ed Bloom (Ewan McGregor), who displays his eccentric delight for life to perfection. Even though the movie retains Burton's trademark quirkiness, it is unlike many of his previous movies, since there is no cynicism here, and hardly any darkness. With "Big Fish", Burton once again offered us a much more optimistic tale of one man's ambitious adventures and travels in a world that's just not big enough for him.

What stands out most about Burton's films is the combination of technical experimentation and visual innovation with strongly emotive story-lines. Sentiment shifts the film away from being exercises in style, whilst  attention to design and visual flair prevents them from seeming too self-indulgent in their narratives of troubled male protagonists. Like other film-makers of his generation, Burton shows himself aware of cinema's past -- hence the allusions in films and interviews to Whales' Frankenstein, the Poe horror cycle and Expressionist imagery. Yet the films usually manage to avoid getting bogged down in either heavy-handed references or smug irony. While independent American cinema too often seems characterized by a purposeless irony, Burton's movies are both dark and weird and yet strangely sentimental: exercises in heart-warming horror.

Clean post. Lots of hard work put in. I agree he is different. Nice.

As Name Indicates We Provide Informative Articles On Many Topics Such As Self Improvement, Technology Or Even Tutorials On Many Topics And In Addition To This We Also Provide Site Reviews To Our Valuable Readers So That We Can Help Them To Reduce Mind Confusions And Can Use Optimum Usage Of Knowledge.

I like the Burton's peculiar fantasy style. Esp., Burton-Jhonny Depp duo's collaborations are my favourite. I have watched most of their films.