Moolaade - Humanist Cinema at its Best 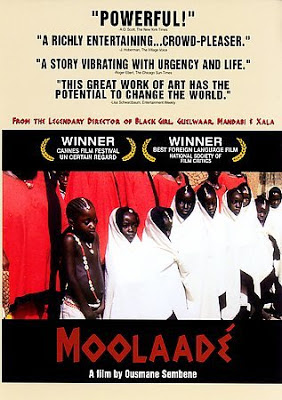 Female circumcision- sometimes called Female genital mutilation is one of the horrific ritual performed by mankind. It is estimated by WHO that more than140 million girls and women have undergone female genital mutilation.Wikipedia says that the FGM is still practiced in 28 countries, mostly in western, eastern, and north-eastern Africa and in parts of Central and South East Asia and the Middle East.

A crisis arises regarding the 'female circumcision' in a remote west African village: Six young girls who are about receive the traditional rite have fled the ceremony. That's the starting point of Ousmane Sembene's "Moolaade" (2004), which uses the subject matter of female circumcision as a jumping-off point to examine how the liberation of women is crucial to the advancement and development of any society in today's world.

Ousmane Sembene, the Senegalese director, is widely regarded as the founder of post-colonial African cinema, even though he is pretty much completely unknown in other parts and have never enjoyed a wide release even by art-house standards. From his first feature "Black Girl" to "Moolaade" he has frequently explored the hardships facing African women and their capacity for resilience and heroism. 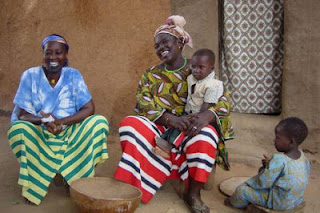 In an unnamed country and in rural Africa, six girls run away from the 'purification ceremony', of which four of them seek shelter with Colle Ardo Gallo Sy, the village's most outspoken women and second wife of a village elder, while the other two are thought to have fled to the city. The village in which Colle offers sanctuary is almost unchanged over the ages: polygamous marriages, mud-walled huts, magical spirits, no electricity, no lights.  The women's only contact to the outside world is the battery-powered radios.

Colle has lost two of her children to this ceremony and has the refused to let her younger daughter Amasatou undergo the painful procedure. So, the four girls seek out Colle rather than their own parents. Colle puts a rope across the open entrance of her compound and casts the ancient protection of moolaadé. According to tribal lore, anyone who tries to bring harm to the girls while they are in  'protection' will suffer bad things and only the person who cast the spell can end it by uttering the right words. The women in charge of the mutilation find her as a threat. The village elders curse her and are fearful of the ancestral spirits that might descend upon them if they dare cross this mystical line. 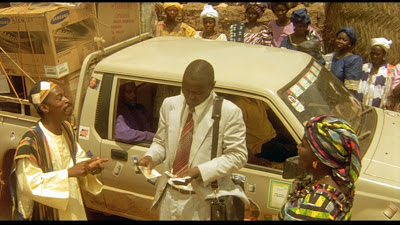 A face-off develops as the son of the village chief returns from Paris, a more liberal-minded guy. He wears a western suit, arrives with TV and radio and always dabs at his brow with a handkerchief. He has to decide whether to side with Colle's rebellion and marry her uncircumcised daughter or to join his father and the other elders in urging her to recant the Moolaade. This becomes a showdown between tradition and modernization, men and women, and progress and stagnation.
At the age of 81, Director Sembene, a novelist, social critic and the dean of African film-making presented 'Moolaade' as a parable and a work of simplicity and formal eloquence. His well-connected subplots help give the film more appeal. An itinerant shopkeeper called 'Mercenaire' -- a wonderful dual character -- who has fought in wars, sets up his business in the village center, from where he can flirt with all the pretty women and observe the goings-on. Religion is also used as another subplot. The village elders, who are Islamic, walk around with prayer beads in their hands and insist that female circumcision is a commandment of faith. Sembene provides a telling metaphor as the smoke from a pyre of burning radios rises and engulfs the mosque tower of this village. 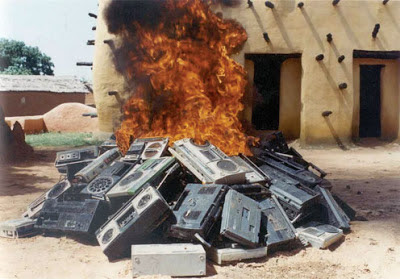 The village shown in the movie is very different than the ones often shown in Hollywood movies. The gorgeous greens, bold garments, the richness of the earth, all attest to the beauty of Africa. At times, the movie moves very slowly and grinds to a halt, but Sembene throws the brutality of the subject matter into sharp relief, making it a film you will not easily forget. Fatoumata Coulibaly commandingly plays the role of Colle. Collé character is a hero and is reminiscent of other strong women in Sembene's films. She enacts her character with a mixture of determination and compassion. Dominique Zeida impresses as the disgraced soldier, Mercenaire.

"Moolaade" is an eye-opening look at a different culture, a fascinating and a compelling story. It shows us the agonies of women in some parts of Africa, but it doesn't ask you to feel pity for them, rather it leaves you envying their bravery and admiring their resolve.
Trailer
Moolaade - IMDb
at November 02, 2012
Email ThisBlogThis!Share to TwitterShare to FacebookShare to Pinterest
Labels: Based on True Story, Family Drama, Social Drama