Beasts of the Southern Wild - A Gorgeous Slice of Americana 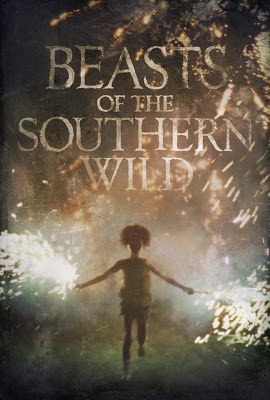 Usually when watching movies our eyes are either tired or cynical and so we are let to  see only what we’re used to seeing in a film, not what it’s possible to see. But there are some other movies which looks like an new land you’ve never seen before, or an old one you haven’t really paid attention to. Benh Zeitlin's passionate and unruly exploration of a rural backwoods patch of land called "the Bathtub" offers a travelogue across a wide delta, where people live in floating shacks, infused with a sense of chaos and calamity. The title "Beasts of Southern Wild" (2012) might make us believe that this is a big-budget monster movie, whereas this is Zeitlin's indie-minded dazzling accomplishment which celebrate the fire and force of a child's spirit, imagination, resilience. And make no mistake by having expectations on how movies -- especially this one -- are supposed to behave.

Plot
Hushpuppy (Quvenzhane Wallis), an African-American six year old girl, with an expressive face, is the narrator of this story. She lives with her charismatic and often distracted father Wink (Dwight Henry) in a  patch of land called "the Bathtub"(downstream from a pier protecting an industrial park). The people (multiracial) in 'Baththub' live in outrageous poverty and each has a shack on stilts filled with a record of things and junk accumulated over the years. Wink is scrambling to raise Hushpuppy with enough grit and survival skills to manage without him. 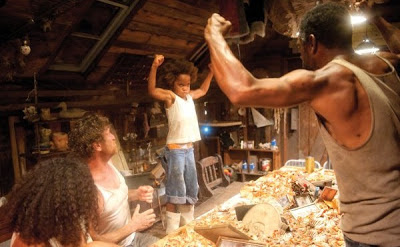 She cooks her own food, looks after the dogs and a hog, all of whom, she ensures that can talk to her and also holds conversations with the absent mother who left the place some years before. When  'Bathtub' was hit by cyclones and the rains -- causing severe flooding -- Hushpuppy and her dad are persistent and they disobey the orders to evacuate. They survive the storm, but the floods comes even more devastation as the plants and animals die from the influx of salt water. Hushpuppy's father might be dying and he tries to impart his daughter with lessons of survival and defiance.

Analysis
So, what's this movie is about? Beasts of the Southern Wild' is less about meaning than being, an experience. It is also not an argument about various environmental and political agendas, which are discerned in the story, but none is made decidedly obvious. Based on a play (by Lucy Alibar), the movie is an exercise in magic realism. Shooting on a 16-millimeter film and aided by ingenious cinematographer Ben Richardson, Mr. Zeitlin brings an intense, artistic approach to every frame of the film. The shoe-string budget works in favor of the movie, since it frees the filmmakers not only to make a movie that doesn’t just ignore the usual rules, but also invents its own grammar and style of storytelling. Director Zeitlin keeps all things laudably vague, using the search as poetic device and not a literal quest that will pay off with a comfortable Hollywood finale. 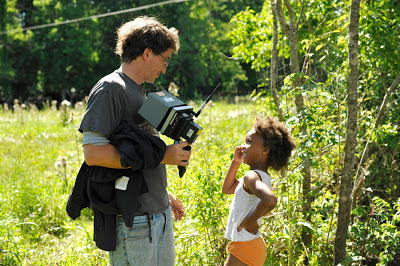 Key to this movie's lyrical touch are the two astonishing performances by Wallis and Henry, two non-professional actors. Henry, who was a baker, was convincing as the unsentimental Wink. He brings a trustworthiness to Wink that was created from his having prevailed the hardships of Katrina. Quvenzhane Wallis as Huspuppy is a mystic with her noteworthy awareness of the world around her and her ability to embrace it with fearlessness. Hushpuppy carries the world on her shoulders, believing it to be so badly broken that only she can fix it, a nightmare we see in the form of marauding bisons — giant warthogs — that pursue her throughout the film.
Audiences conditioned to the mainstream movies may have trouble responding to “Beasts of the Southern Wild”, which is hardly avant-garde, and its narrative is easy to check out. The movie's impact,  is sensory rather than cerebral. If you try to find the exact meaning,  you’ll be exhausted in minutes. It doesn’t always make much sense, but somehow the universe manages to fit together exactly right just as Hushpuppy says, in the film, it would.
"Beasts of the Southern Wild" transports us to a peculiar, magical place and uncompromisingly celebrates the strange. This is not a routine Eco-doom film, rather an empowerment story. It is the best American Art-house movie of 2012.
Trailer
Beasts of the Southern Wild - IMDb
at January 18, 2013
Email ThisBlogThis!Share to TwitterShare to FacebookShare to Pinterest
Labels: American Indie Films, Existential Movies, Social Drama