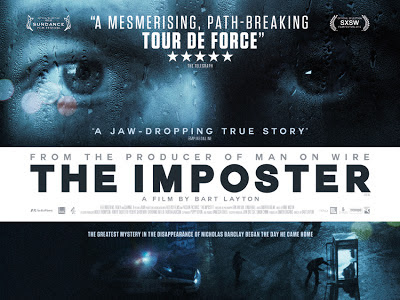 'The truth is stranger than fiction': That's a cliched line often used to lure the audience into a dramatized true story. But, Bart Layton's documentary and investigative thriller is veritably weirder than any kind of fantasy. In 1994, blue-eyed, 13 year old Nicolas Barclay from San Antonio has disappeared without a trace. In 1997, the family of Nicolas receives a call from a inspector in a distant small town in Spain. He was kidnapped by military people and was sexually abused. Nicolas' family was shocked and at the same time is thrilled to have him back. Carey Gibson -- Nicolas' sister -- arrives in Spain to identify him and bring him home. The physical appearance, the accent doesn't match up with Nicolas, but the sister is desperate to believe that her brother has been found.

Not only that the physical appearance is wholly different from Nicolas, the person is a totally different guy. He is, in fact 23 years old. His name is Frederic Bourdin -- "The Imposter." The docu-thriller starts with Bourdin narrating the events, with a demeanor that somehow bridges the gap between arrogance and disbelief. Even he doesn't believe that he has fooled these people for some time.  Beverly (mother) and Carey (sister) explains us about the characteristics and disappearance of Nicolas.

After Cary's identification, Bourdin was issued the passport and the two fly back for the homecoming. Beverly embraces Bourdin and believes that it is her Nicolas, never doubting him. Only a psychologist and a private investigator questions why the family members are so eager to accept this obvious imposter, and begins to wave a homicidal flag, wondering about their involvement in Nicolas’s disappearance. Even Bourdin starts to wonder about Nicolas.

The bizarre thing is Bourdin has given many interviews in various channels about his kidnapping. He has cooked-up a preposterous back-story of sex slavery at the hands of the US military. What's even more bizarre are the facts and twists towards the end. Most of the documentary is explained from the view of Bourdin. As a viewer, it's wise not to believe him fully, because the facts at the end really surprises us than his tale.

British director (debut feature) Bart Layton has made a documentary that moves like a edge of the seat thriller. He has smartly used reenactments not only to tell the story but to amplify our confusion of identity (in a few sequences Layton puts Bourdin’s voice into the mouth of his younger reenactor). The twists are around in every corner, since the testimony of key players differ from one another. Layton is also impartial in his observations and has kept everything mysterious till the end. It is also unsettling to say that Nicolas' disappearance is still remains unsolved.

The Imposter (2012) delves deeply into a tabloid news and makes us ask more questions than answers. The image of a grinning Bourdin leaves us with a disturbing proof that willful cheaters can prosper in this world.


Read the Wikipedia link after watching the documentary!!