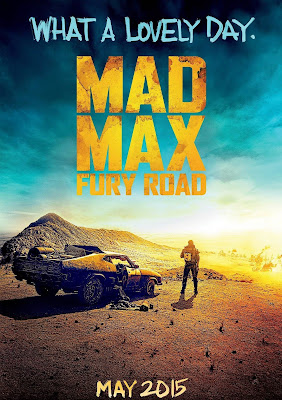 Australian film-maker George Miller’s name was often mentioned with his contemporaries like Peter Weir, Gillian Armstrong, and Bruce Beresford for taking Australian films to international audiences (the critics called “Australian New Wave” film-makers). Although, “Picnic at Hanging Rock” (1975), “My Brilliant Career” (1976) or “Breaker Morant” (1980) gained numerous awards & acclaim in the international film festival circuits, it was Miller’s “Mad Max” (1979), which got affiliated to global main-stream audiences. The relentless post-apocalyptic setting, the bizarre cars & maniacal gangs, lone gunslinger protagonist, and the sweeping action made “Mad Max” a pop cult craze in the early 1980’s. But, like George Romero, Miller too didn’t go beyond the ‘Max’ movies to carve an exciting career with great outputs. Although, he enjoyed directorial success with movies like “Babe: Pig in the City”, “Happy Feet”, his grand vision seems to have burnt out with those cult action flicks.

It didn’t seem like exciting news, when I heard Miller was re-booting “Mad Max” (despite the fact that the trailer was stirring enough) for the contemporary generation, since we know how must of the re-boots messes up the original setting. But, the septuagenarian Aussie has comeback strongly with an exalted vision and undiminished fervor. “Mad Max: Fury Road” (2015) is the kind of action epic that sets new benchmark for high-octane mayhem stunts.   Of course, the vehicles here are more complex than the characters and the storyline, but this boiled-down-to-essentials approach wonderful works here. Max Rockatansky (Tom Hardy), a former cop and post-apocalyptic road warrior, in a voice-over, states how the civilizations collapsed into a hellish landscape, ruled by raging crazies. He describes himself as ‘a man who runs from both living and the dead’ before eating a live two-headed lizard. 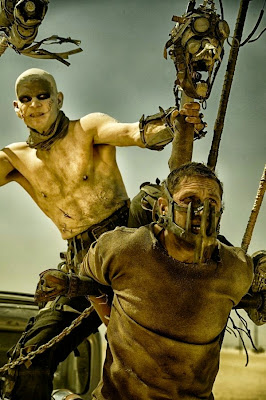 Max is often haunted by his dead child, whom he failed to save. His much cherished vehicle is pursued by a group of bald berserkers. He is taken as a prisoner into the citadel, which is ruled by a disfigured dictator ‘Immortan Joe’ (Hugh Keays-Bryne). Apart from gasoline and water, blood is also a precious commodity for the ruler of ‘citadel’. Blood is the primary source for Immortan’s albumen-colored, diseased young male soldiers called as ‘War Boys’. Max becomes a ‘blood bag’ as he is literally connected to the eccentric war boy, Nux (Nicholas Hoult). Furiosa (Charlize Theron), a one-armed warrior woman & one of Immortan Joe’s trusted operative, takes the treasured 18-wheeler War Rig for a routine gas run to neighboring, rival towns.

But, Furiosa takes a different path – a path to redemption – and accompanied with her are five of Immortan Joe’s very precious things – beautiful & healthy young slave wives of the tyrant. The girls called as ‘breeders’ are kept alive for the sole pleasure of Joe to remake human race in his own image. Max, the blood bag, is unwittingly thrown into the pursuit for Furiosa. Max, who doesn’t care about anything other than his survival, takes sides with Furiosa and helps the women to reach their destination as the ‘War Rig’ was chased by weirdly & innovatively designed monster-trucks.

The film starts with Max facing away from the camera, looking at the apocalyptic wasteland, and like this opening image, Max most of the times stays in the background, providing center stage for Theron’s Furiosa. He literally and figuratively kept aside of the driver seat. He isn’t portrayed as the usual gunslinger, who guides these damsels in distress. In fact, Furiosa seems to be better marksmen (woman) than Max. Tom Hardy plays Max in a low-key manner, echoing his subliminal performance in the recent “Locke” – a different kind of vehicle-bound thriller. Hardy’s Max is far darker in tone than Gibson’s partly playful one. If you feel that Hardy lacks the kickassness that defines the gunslinger archetype, then there’s no worry because that aspect is filled in by Charlize Theron. Furiosa seems to have the looks & guts of Weaver’s Ripley (“Alien” franchise) & Renee Jeanne Falconetti (“Passion of Joan of Arc”). Although Furiosa is an elemental character in an explosive action film, Theron brings impressive gravity to the character to make the proceedings engaging enough. 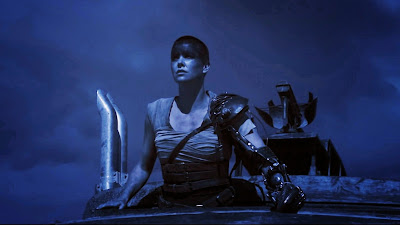 The great part of “Fury Road” is the Gothic & begrimed imagery. The painstaking details conjured by the production designer – from intricately designed tattoos to spikes on the wheels to the skull motifs – everything is a joy to behold. Apart from the unbelievable vehicle designs & stunts, impregnable advantage of this movie is that we could clearly the action going on screen. It is something which we couldn’t say for “Transfomers” franchise or for even some movies in the “Marvel” or “X-Men” franchise. Miller has seamless integrated practical stunt works with the CGI, which makes the stunts visible and also gives enough space for audience to heave a sigh. Despite the grim setting, Miller does provide some comic relief with the character of Nux. Hoult plays Nux to perfection especially when he exuberantly says “Oh, what a day! What a lovely day”. The thee-way fight between chained Nux & Max and Furiosa reminds as of a perfectly orchestrated slap-stick comedy. 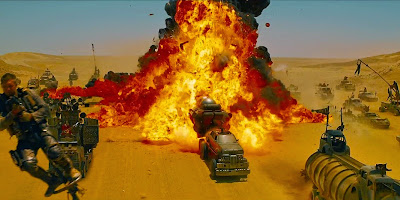 Miller’s feminist perspective message doesn’t seem to be thrown as an afterthought – as the new cool thing to have. The traces of healthy culture like books or music (piano) could only be seen in this wasteland inside the wives’ chamber (where there’s also protest slogan “We’re Not Things”). Even Max, who sort of comes across like a chauvinistic hunk, eventually surrenders to a female sentinel.  The final pileup of metals & bodies in the canyon comes across like the eradication of self-centered male ego. Of course, nothing is subtle here, similar to that flamboyant war drummers & red-dressed electronic guitarist. But, isn’t it ridiculous to expect subtle messages (even messages) in a loud-action movie.

“Mad Max: Fury Road” (120 minutes) is a delirious, incredible, eye-boggling crowd-pleaser. It is more entertaining than the recent installments of “Fast & Furious” and “Avengers” franchise.