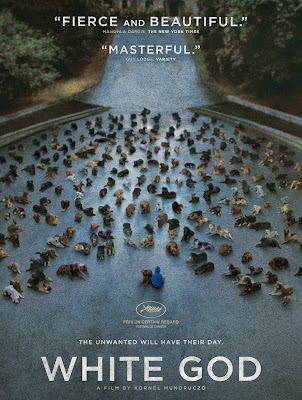 Hungarian director Kornel Mundruczo is said to have visited a dog shelter, after the rumors about a piece of legislation, which would tax owners of dogs with mixed races more than those of pure breeds. The legislation, of course, was scorned and dropped at early stages, but the discussion and the ensued visit to dog pound, inspired director Mundruczo to make “White God” (2014), a sociopolitical allegory on canine madness. The movie brought the Hungarian film-maker to spotlight as he won ‘Un Certain Regard’ Prize at Cannes Festival , who for years have been working on small-scale dramas that ponders over the human experience.

Kornel Mundruczo dedicated his film to the late maverick Hungarian director Miklos Jancso. Jancso (“The Round-Up, The Red and the White”), who was known for conjuring, critically acclaimed parables of oppression & war, might have loved this mixed-genre allegory, although “White God” doesn’t possess the uniqueness his work had. The story of the film is something you might have already heard or read: the emotional connection between a young girl and her pet. Comedy dramas like “Lassie” and adventurous thrillers like “Rise of the Planet of the Apes”, and numerous Disney fables contemplated on such relationships. Unfurling a part of the narrative from dog’s point of view is also not something new, as we had seen it in plenty of schmaltzy, talking pets’ movies (both live-action & animation). Samuel Fuller’s “White Dog” and Hitchcock’s “The Birds” were also elusive allegories that used transformation of genial creatures to convey a sociopolitical message. 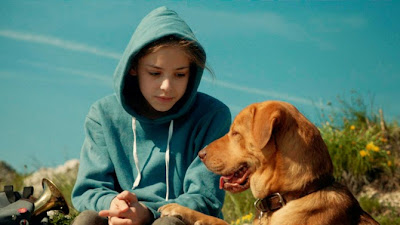 So, “White God” doesn’t score much on originality, but as a cinematic experience, the film offers a lot. The technical accomplishment of featuring 274 dogs, without the use of CGI is impressive and pair of canine protagonists consistently emotes as well as their human counterparts.  The movie starts with a prologue of sorts, where a young girl on a bike journeys through deserted streets of Budapest, only to be chased by hundreds of feral dogs. The 13 year old girl’s name is Lili (Zsofia Psotta) and her best friend is a mutt named ‘Hagen’. Lili’s mother is about to attend a conference in Australia for three months, and so, Lili and Hagen are dropped off in the care of estranged, authoritarian father Daniel (Sandor Zsoter). Lili’s father is a sour-faced former academician, who is now working as a meat inspector.

Lili’s dad, Daniel hates Hagen and refuses to pay heavy tax that has been levied against mixed dogs. Fearing that her father might send Hagen to a dog pound, she takes it to her music school (where she plays the trumpet) and even tries to run away. Before long, Daniel finds Lili and she is forced to tearfully bid farewell to Hagen, who is abandoned on the motorway. Later, Lili is determined to track-down her pet friend, while Hagen roams around the city with his homeless friends to find food. Hagen comes across various types of human abusers, who all give him a scary aggressive persona. His natural & gentle instincts are dried out, when he is trained by a lowlife to become a fighting dog. But, too much discrimination pushes Hagen to start a canine revolution, seeking the blood of their abusers. 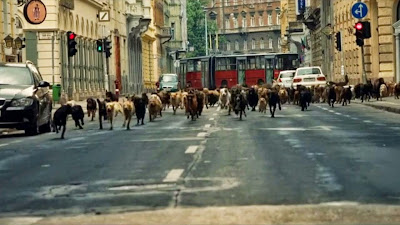 Considering the recent surging oppression of impoverished immigrants and homeless people in the European countries, the dogs in the film definitely seems like a stand-in for those discriminated human bunch. The economic inequality, however, could be seen beyond the European or Hungarian context. Even if the dog metaphor and its related social commentary don’t enamor you, the astounding orchestration of the dogs, without the glossy CGI fakery, will surely lend an engaging experience.  More than 250 dogs from Hungarian shelters were coached by a team, overseen by America trainer Teresa Miller. Director Mundruzo has created an interesting camera framework as he (and DP Marcell Rev) has built specific rigs to view the world from dog’s eye perspective. The decision to not employ the use of CG made the film crew to shoot nearly 200 hours of footage with the dogs. So, the editor must have had a grueling time to craft the performances of the canines in order to bring it on screen. 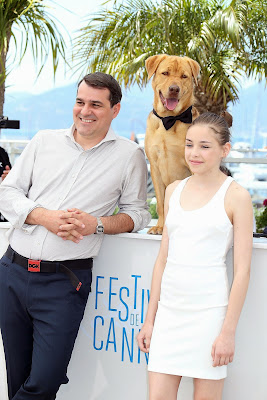 Nevertheless, animal-lovers would definitely flinch at the simulated violent sequences of dog fights. Many of the violent & ferocious moments make you ask, ‘how they trained the dogs to do that?’ The sequences where the vicious gambler trains Hagen is almost unbearable to watch. He whips & drugs Hagen to push it into a state of perpetual paranoid aggression. The clever camera angles & editing in these scenes conveys the animal’s pain without elaborately depicting the beatings.  Director Mundruczo also adds subtle satirical notes, especially in the scene, where the students’ orchestra performance, watched by bourgeois populace, is interrupted by dogs glaring down from the box seats of the concert hall. If there is a flaw in “White God” it is in the way it walks through different genres – from social realism to melodrama to horror – without getting the right tonal changes. However, the ambiguous ending appeared to be perfect: it could be a message of despair or hope (whichever way you want to take it).

“White God” (117 minutes) is a cautionary parable with an overly familiar plot and core message. But, its technical achievement and a culturally specific narrative engage us throughout.