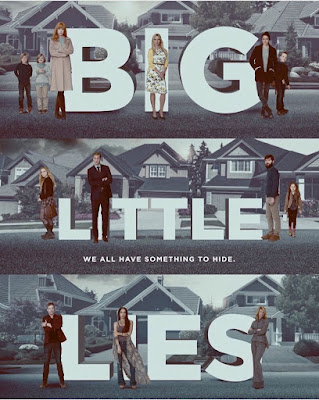 HBO’s seven-episode mini-series Big Little Lies (2017) is set in the wealthy beachfront town of Monterey, California. The gorgeous natural atmosphere and the plush, huge homes overlooking the ocean seem to perfectly confirm to the naïve person’s idea of paradise. Similar to Mr. David Lynch’s camera that reveals swarm of insects underneath the neatly trimmed yard (in Blue Velvet), relentless abuse are lurking beneath the divine surface. Superbly written by Emmy-Award winning producer/writer David E Kelley, and deftly directed by Canadian-French film-maker Jean-Marc Vallee, Big Little Lies is an adaptation of Liane Moriarty’s novel of the same name, which is set in an affluent Australian small town. A little glance at the story line would definitely make us think that it’s totally unrelatable or it’s just another tale of desperate, white, and obscenely wealthy housewives. And, yes the majority of central characters here lead extravagant lives who possess the usual obnoxiousness of the privileged white. But Mr. Kelley and Mr. Vallee succeeds with Big Little Lies by penetrating through those layers of extravagance and obnoxious behavior to intimately look at their immense emotional burden. They surely are f***ed-up people, taking one wrong decision after another, yet the sensitive writing makes us empathize for these women.

Big Little Lies is dressed up as a murder mystery, but at its best this is an incisive exploration of the emotional and physical abuse wreaked on women and children in a status-obsessed societal set-up that’s powered by toxic masculinity. When one throws in words like ‘toxic masculinity’ naturally a doubt arises whether the series is a stridently feminist tale, showcasing every male as monster dressed-up in suits. While the novel and series has strict idealistic intention, it thankfully never reduces any male or female characters into caricature. Irrespective of gender, people here make mistakes and act as annoying haranguers. The little over-stuffed first episode begins with a female detective arriving at the crime scene of a gruesome murder. The setting is gala party where all the affluent couples of the small town have attended. In the interrogation room assortment of gossiping characters unveil their stories and theories on the motive for murder. 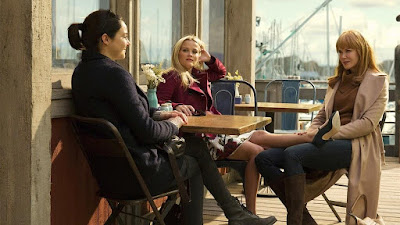 In the first episode listening to Greek chorus characters, we aren’t just hooked up to know about murderer’s identity. We are also more interested in knowing who the victim is. The story unfurls in flashback which revolves around five women. Reese Witherspoon plays fire-cracker Madeline Martha, mom to aloof teenager, a super-smart little girl, and wife to work-at-home computer engineer Ed (Adam Scott). Madeline is like the older version of Tracy Flick – played by Reese Witherspoon in Alexander Payne’s Election (1999): cute-looking as well as detestable. But, as the character grows in further episode we witness a vulnerability to her which makes us empathize with her plight. Madeline wages two battles in this particular phase of her life: one with city of Monterey over a shelved play; and the other with ex-husband Nathan (James Tupper) who is now married to angelic and disillusioned woman Bonnie (Zoe Kravitz). Nicole Kidman plays Celeste, a successful lawyer who had sacrificed her career to take care of twins and handsome husband Perry (Alexander Skarsgaard). Their beautiful faces and gorgeous mansion could make up for picture-perfect portrait of happy family life; except for the fact that, everything is decayed beneath this attractive surface. 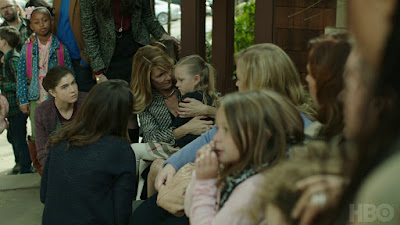 Jane Chapman (Shailene Woodley) is the new girl on the block. She is much younger than the other moms dropping their children at the renowned local public school. Jane is a single mom who hopes to start fresh life with son Ziggy and bestow him the best education possible. She quickly forms friendship with Madeline and Celeste, although Jane evidently becomes uncomfortable when their conversation moves to Ziggy’s father. Renata Klein (Laura Dern) is the most privileged among the five women (in the tale) which also makes her the most disliked person in the town. She lives with a very understanding husband and a charming little daughter Annabella. Renata routinely struggles between finding time for her daughter and to wage corporate boardroom wars. The central conflict of the story commences on the school orientation day when first-grader Annabella points to newcomer Ziggy as the bully who choked her in the classroom. Ziggy rejects the accusation, Jane believes her son, and Renata chastises both of them. This entire drama unfolds in front of the parents of other first-graders. Madeline who already bears a grudge for Renata takes over the conflict. Supported by Celeste, she makes sure it’s now Team Madeline vs Renata Klein. The bullying of Annabella doesn’t stop and it makes the rift between the mothers run deeper. Ziggy keeps on saying he is innocent, but even Jane has a slight doubt, especially after considering the nature of Ziggy’s biological father. Meanwhile, the brutish behavior of Celeste’s husband Perry reaches threshold point and Madeline’s unchecked hate for ex-husband Nathan’s family unearths fresh conflicts. From the perspective of other voyeuristic town residents, these families (central to the tale) harbored varieties of ill-feelings so as to settle it in murder. However, as we journey with these characters and understand their emotional pains, we are much tensed over learning who the victim is? 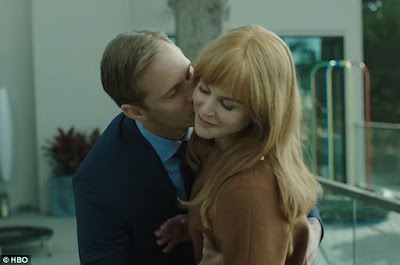 Writer David E Kelley turns what seems to be the superficial elements into something profound. With every little conversation taking place inside simple four-wall set-ups, different layers float to the surface, provoking us to re-think our simple judgment of characters. The most fascination aspect of writing lies in exploring the complexities of power within couple, particularly in the fights between Perry and Celeste. Director Vallee doesn’t film these sequences in one unbroken shot, but rather showcases the gruesome violence in little doses, suddenly cutting into atmosphere of silence and cutting away to the unconquered ocean. May be the ocean is representation of the woman who unrelentingly flows over despite facing death knell. However, Perry (Celeste's husband) isn’t portrayed as a one-dimensional monster. He is very well aware about his inner demons and apart from the time he fails to conquer those demons, he behaves like a good husband & father. Gradually, he becomes annoyed over the peaceful routine, engages in argument, initiates a slap, to which Celseste reacts (with slap or shove) and the whole distasteful action culminates in fierce sex. Then he apologies and promises to continue the therapy. The writing in therapy scenes are equivalent to walking on a tightrope. Celeste wants to confide enough to the therapist to seek help without revealing too much about Perry’s behavior. The terrifyingly toxic marriage between Celeste and Perry also keeps us on the edge, thanks to incredible performances from Skarsgarrd and Kidman. Kidman who is UN Women Goodwill Ambassador (helping out female victims of domestic violence) plays one of the hardest and best role in her career. She doesn’t play as the quivering wife of a classic abuser. On one level, Kidman’s Celeste likes the high sexual energy that follows her husband’s wrath. Kidman turns Celeste into a gray character and embodies the feelings of terror in a way not usually shown in films or TV series. 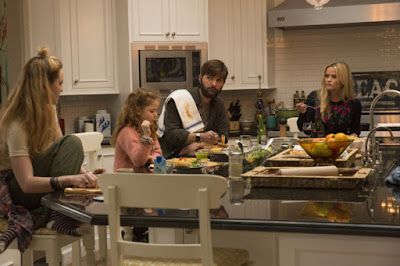 While Vallee and Kelly builds up Woodley’s character Jane as the central piece of the jig-saw puzzle (using flashbacks and unnerving dreams), the second-best character in the series is Witherspoon’s Madeline. She starts off with her usual charm and unyielding energy. However, Witherspoon is at her best when she brings her character’s vulnerability and anxieties to the surface. She’s both hilarious as well as exasperating without exaggerating any emotions. Although Laura Dern’s Renata has limited scenes, she perfectly amalgamates the character’s arrogance and insecurities. Zoe Kravitz’s Bonnie is the most under-written character of the series. Yet, we are able to scrutinize her character in a different light after the tense finale. Director Jean Marc Vallee explores the themes of loneliness and domestic abuse by funneling it through sub-genres of social satire and murder mystery. He brings perfect control over the tone, although the jarring sound & visual effects becomes too repetitive at times. Vallee excels far better at using silence to create uncomfortable, brooding atmosphere. Big Little Lies may not be the starkly realistic look at the lives of middle-aged white women. It has melodrama and contrived mysterious elements at its center which runs toward a neatly-packaged resolution. Yet, its greatest quality lies in depicting the full range of emotions of the female characters. They are allowed to be fallible and detestable without provoking the viewers’ need to judge them. In this Big-entertainment medium, where women aren’t allowed to make mistakes and often get punished for harboring sexual desires, there’s a lot of genuineness to appreciate in Big Little Lies.

Ok, now you have got me hooked! That was an incisive review that is bound to lead to the series. Thanks for the tip.