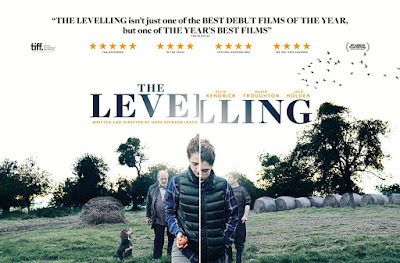 I am interested in watching films dealing with grief and families that have stopped or failed to communicate with each other. The emotional canvas of such films feels instantly recognizable. Hope Dickson Leach’s debut feature The Levelling (2016) -- set on a dairy farm, west of England – explores the tragic existence of a young daughter and father after an insurmountable loss. Similar to many other quietly devastating family dramas, unfurling in small town or farm setting, The Levelling too suggests of secrets, hidden beneath the surface; some secrets literally buried under the muddy landscape, while others entombed inside one’s heart, festering agony and resentment. Despite the easily recognizable character sketches and narrative arc, what sets the film apart among the other grim family dramas is its powerful sense of place and its ability to contemplate the situation with emotional honesty (not through sentimentality).

The title refers to Somerset Levels – area constituting wetlands and coastal plains of Somerset. In 2014, heavy rains gave way to devastating floods in the area, causing a lot of property damages and forced evacuations. The insurance companies copped out, forcing the farmers to fend for themselves in the waterlogged farm. Diseases threatened to wipe out the cattle breeds. The country peoples’ lives were turned upside down and there’s literally no respite waiting for their financial grievances. Director Hope Dickson Leach found the grim reality to be a perfectly resonating set-up for the family story (a reality which she doesn’t exploit for cheap melodrama). She further states that the farmers’ plight is more haunting when reflecting on how Brexit is going to cause more troubles for them.

The Levelling was shot on a shoe-string budget, making most out of the limited location and cast. Leach’s wonderful formal sensibilities and nuanced writing is evident the film’s opening sequences. The prologue showcases a mad, drinking party. It cuts to the shot of a JCB standing guard atop the muddy, blighted landscape. A young woman sits inside a car and tries to control her tears. The old man sitting next tries to comfort her. She asks with quiet anger, ‘Can you make it my dad, instead of my brother?’ A very simple scene that efficiently conveys Clover Catto’s (Ellie Kendrick) frayed relationship with her father and informs about the tragedy which has made her return home. Clover is studying to be a veterinarian and withholds rage for her father Aubrey (David Troughton). She calls him Aubrey, not dad. Clover hopes to leave the farm soon after brother Harry’s funeral. When she asks Aubrey about the alleged suicide of Harry (blew his head-out in the toilet with a shotgun), he dismisses it as ‘a bloody stupid accident’.

The floods have caused the house nearly inhabitable as Aubrey is now dwelling inside a caravan. Clover learns that the farm business is also in despair and the father is in denial about it as much as he denies the suicide of Harry. Half of the cattle breed is about to be sold and Clover unearths executed badgers (which may cause problems with the law). The Badgers may have been killed to avoid bovine TB. Clover follows the routine of milking the cows and cleaning the farm, but doesn’t find the reason that provoked Harry to commit suicide. Farmhand and Harry’s best friend James (Jack Holden) stirs up Clover by providing few answers. The deceased Harry, who is mostly seen on photos, has a haunting presence over the failed family, un-earthing fresh anxieties and guilt.

The Levelling has narrative structure and characters of a European mood piece than the regular genre piece. Dickson Leach parcels out information in small doses, which is not just to increase the dramatic quotient, but also to understand the characters little better.  Furthermore, the tactic to withhold information doesn’t mean it really possesses a bigger mystery (the mystery, if you think there is one, is predictable). It’s simply a means to gradually place us in the gloomy atmospherics and fully empathize with the father and daughter’s predicament. The script is free of unnecessary sub-plots. Within its limited time and scope, Dickson Leach profoundly explores the roots of familial dysfunction (still few notches below Debra Granik’s Winter Bone). The scenes written mostly as two person conversations could have felt boring, if not for the impactful film-form.

Leach’s visual sensibilities (Nanu Seagal’s cinematography is simply astounding) remind us of the early works of fellow British film-makers Lynn Ramsay and Andrea Arnold (Leach have made award winning short films and was former assistant to director Todd Solondz). The relentless gloom she expresses or frames even turns the deceased Harry as well as the crumbling farm into dominant characters. Director Leach also makes use of interesting recurring visual motifs – for eg, the hare struggling in pool of water which becomes metaphor for Harry who had tried his best to keep himself and the farm alive.  Similar to Ramsay’s study of loss and yearning in Ratcatcher (1999), these poetic interludes tries to subtly indicate the struggles of the broken communities. The two central performances don’t falter for a moment. Ellie Kendrick – best known for playing Anne Frank in 2009 mini-series and for the role of Meera Reed in Game of Thrones – bestows one of the memorable screen-bearer of grief in recent times. Her awkward blurts, quiet smirks and suppressed feelings of guilt and anxiety are fascinating to witness. Veteran actor Troughton excels as the emotionally hardened father. We can’t stop empathizing with the old man when cracks appear in his stiff, repressed facade. The final scene involving Kendrick and Troughton is nothing less than brilliant (that painterly frame adds to the big emotional impact).

The Levelling (83 minutes) with its distinct mournful mood and splendid performances proves to be one of the best debut-features in recent times. It’s yet another moving portrait of grief and dysfunctional family .

That looks like something I will like. Very detailed review too. I am glad I came to your blog. Some great collection you have here.

Thanks for visiting my blog. Please do convey your views on the movie after watching it.