The Third Murder [2017] – An Impressively Ambiguous and Obscure Courtroom Drama 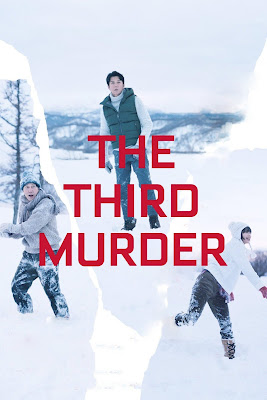 Author, journalist, and Asia editor of the Times Richard Lloyd Parry’s true-crime book ‘People Who Eat Darkness’ (published in 2010) acutely delineates the peculiarities of the Japanese judiciary system among many other things, which I think helped me better understand the inherent conflicts in Hirokazu Kore-eda’s courtroom drama The Third Murder (Sandome no satsujin, 2017). Central among the facts in Mr. Parry’s book is the conviction rate in criminal trial: 99.8 percent in Japan compared to 70-75 percent in Western courts. This guaranteed conviction rate, over-reliance on defendant’s confession (than physical evidence), defense lawyer’s limited role, and the system’s obsession to judge a crime based on the motive makes The Third Murder a unique legal narrative, far removed from the theatricality of usual courtroom dramas. While the film could be better understood from the Japanese context, it also raises spate of universal questions regarding judiciary’s interest in moral absolutes, the value of a person’s life, and the ultimate intention behind capital punishment.

Insipid features like True Crime (1999) and The Life of David Gale (2003) campaigns against the use of capital punishment by weaving a narrative that focuses on a wrong (innocent) person getting convicted. Then there are masterful works like Death by Hanging (1968), In Cold Blood (1967), etc where the convicted ones’ criminality is acutely demonstrated, yet we feel conflicted over the nature of state-sanctioned killing. The Third Murder is more elusive than these two types of films, since the possibilities of understanding the truth remains very slim. The film opens with factory worker Misumi (Koji Yakusho) bludgeoning a man to death, alongside a river bank. He later burns the corpse. The next time we see Misumi, he is already behind  bars and has confessed to the crime. It seems to be a open-and-shut case of murder and robbery (the murdered man’s wallet is missing). Subsequently, we learn that Misumi had only just been released from prison, for killing two loan sharks in the 1980s. 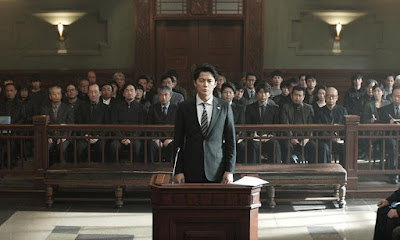 Hotshot defense lawyer Shigemori (Masaharu Fukuyama) takes over the case. He and his defense team try to do the impossible: to reduce the imminent death penalty to life in prison. Shigemori comes to know that it was his judge father (now retired), who had sentenced Misumi three decades prior. It is made clear that Shigemori is less interested in truth and boasts no empathy for Misumi, as he is simply concerned with the technicalities and muddled waters of judicial system that could benefit their case. Anyway, Misumi’s testimony couldn’t be relied upon, since his motivations for committing the crime stays elusive. Misumi is vague, non-committal, deliberately tricky, claiming different reasons for why he killed his factory boss. The man’s varying testimonies makes the defense team pursue distinct line of theories, ranging from insurance murder, blackmailing gone wrong, and rage-type murder. At one point, Misumi breaks down and tells he didn’t commit the murder and that the confession was forced out of him. The sheer madness of these constantly shifting stories clutters our moral compass and further showcases the impossibility of perceiving the crime from objective manner. Even Shigemori’s robust facade crumbles and he is caught up amidst multiple facts and emotional quandaries. 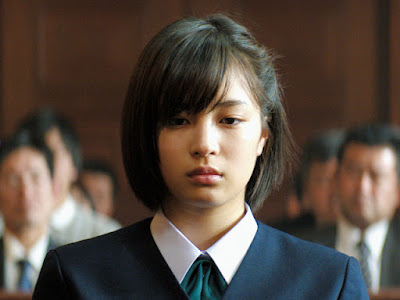 Veteran actor Koji Yakusho’s extraordinary performance is what makes this oddly paced drama mostly work. He is forthcoming and calm at times, later effortlessly slipping into menacing, aloof mood. Although there’s an impenetrable vagueness to the nature of Misumi, Yakusho keeps him affable and extracts empathy at the right occasions. Similar to the last minute twists in Primal Fear (1996) or The Usual Suspects (1995), we expect Misumi to surprise us by delivering the ultimate truth that’s not cloaked in ambiguity. But it never happens, as the character remains opaque till the end, the motive behind the crime unknowable forever. This definitely would frustrate viewers who are expecting a murder mystery or at least a 'whydunnit', in the vein of author Keigo Higashino’s tales (The Devotion of Suspect X). Director Hirokazu Koreeda simply uses the hook of a genre set-up to draw attention to the convoluted legal process. He is quite interested in the question of innocence or guilt, and its expressively mutable position among the sea of doubts. The Third Murder does indict the sky-high conviction rate by solely relying on confessions (forced and otherwise), the unpleasant uncertainty in overseeing the criminal trials, and the sordidness of death penalty (hence the title ‘third murder’, indicating the killing sanctioned by the state). However, Mr. Koreeda never proposes his themes and ideas in the form of bland, straight-forward statement. His view is more nuanced. He uses the deeper drama (or conflicts) between the characters to get to his prime motivations and not the other way around. 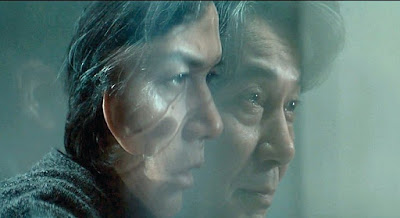 The Third Murder does suffer from pacing issues as the ever-changing testimony and the meandering exchanges slightly exasperate us. The lively dynamics with which Koreeda often explores the father/daughter or mother/daughter relationship totally lacks here. Shigemori’s strained relationship with his teenage daughter (Aju Makita) is employed to showcase the lawyer’s remote manner in treating the narrative’s other teenage character (Suzu Hirose). But then the exchanges between these characters are so dry and bloodless, compared to the ones from Koreeda’s intimate family dramas. Koreeda’s script and direction gets whole lot better during the increasingly intense conversations between Shigemori and Misumi. Bolstered by the cinematography of Mikiya Takimoto, the series of thought-provoking and layered tableau set in the small, interview room are brilliantly visualized. The two actors are separated by a Plexiglas wall, and this set-up is filmed from distinct angles, providing myriad of character & theme-based insights. Particularly laudable is the blocking of the performers, where the camera often lingers on one side of glass wall, whereas the other’s reflection is magnificently superimposed (both faces filling the screen), emphasizing on the murky nature of the truth. At one occasion, the staging makes the glass wall non-existent, as Shigemori’s role of ‘judging’ and Misumi role of ‘being judged’ dynamically transforms. These clever, deft visual touches impeccably depict Kore-eda’s ability to work outside his comfort zone (away from the haven of family dramas).


The Third Murder (124 minutes) is a cold, meticulously crafted legal drama from a renowned film-maker, known for his warmth-inducing humanist works. Hirokazu Koreeda has tried to fuse his philosophical thoughts and ultra-nuanced characterizations into a quasi-genre set-up. The result is an intriguing crime puzzle, but one that smartly shies away from delivering due emotional catharsis or delicious twists.