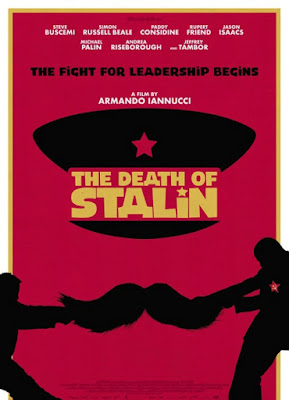 Scottish satirist and television director Armando Iannucci is best known for BBC series The Thick of It and HBO series Veep – both a foul-mouthed political farce, which highlights the heights of absurdity in the upper echelons of 10 Downing Street and White House. Subsequently for his second feature film, Mr. Armando has chosen a narcissistic and dangerous political leader as his subject matter. Based on French graphic novel by Fabien Bury and Thierry Robin, the master satirist’s movie makes a mockery out of the rat-race between Soviet dictator Stalin’s cronies, immediately after his death in March 1953. Naturally, many viewers could find an unmissable link between the old political narrative and the contemporary ones in America and Russia (both countries now led by wicked narcissists). The Death of Stalin could be viewed as a cautionary tale; that we can easily commit the very mistake which brutalized different countries in the past. In this era of Erdogan, Putin, and Trump, the ruthless double dealings and battle of egos within Soviet power circle doesn’t seem inconceivable or a thing of the past. However, the impressive thing about ‘The Death of Stalin’ is how it delivers devastating blows upon the political idiocy and Bolshevick inhumaness, while also expertly extracting great laughs from the most solemn situations.

The Czech New Wave film-makers of the 1960s and the Romanian New Wave directors of the 2000s knew how to exhibit the madness of a dysfunctional totalitarian regime. Unlike traditional cinema which took pains to portray the inhumanity of dictatorship, the prominent works from Czech and Romania, mocked at their government’s absurdities. Fighting the sanitized image of a tyrannical regime through ridicule always seems as effective as the collection of all bitter facts in history books. Even when all is said and done about Hitler, Mao, Stalin, Idi Amin, etc people are still haunted by the unfathomable depth of their crimes. Then, the only better solution is to simply laugh at them. Black humor is a better tool to approach these bizarre and scary leaders.  Accordingly, Armando’s pitch black-comedy of Stalinist terrors sort of adds to the unease without diluting the inherent tragedy. Furthermore, the fact that the current culture ministry of Russia decided to ban the film shows how it feels towards people laughing at Stalin. 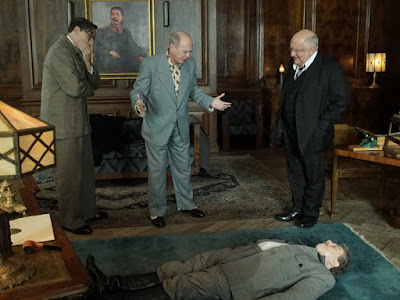 The Death of Stalin opens with a terrific comic situation that demonstrates the terror and rampant paranoia in Stalin’s regime. The beady eyed dictator (Adrian McLoughlin) disposes off anybody who shows little dissent. Lavantiy Beria (Simon Russell Beale), the grubby master-executioner (chief of the Soviet Security) sees over the execution of people, detailed in a list approved by Stalin himself. The other important members of the venal and malicious Soviet high command include: Malenkov (Jeffrey Tambor), the deputy named as Stalin’s successor; nakedly ambitious Khrushchev (Steve Buscemi); Molotov (Michael Palin) who clings to Stalinism so as to even declare his innocent wife a traitor. As Iannucci sets up the nature of these sub-ordinates who operate according to whims and moods of their leader, he also demonstrates the delicate situation of Radio Moscow’s director (Paddy Considine). Stalin unexpectedly phones in and demands a recording of the Mozart piano concerto. The director is alarmed since the live broadcast isn’t recorded. He springs to action and forces the audience to get back into their seats and bribes the pianist (Olga Kurylenko) to play the entire concert again. As the concert is played once more, it is cut to shots of security forces rounding up the citizens in the list; the smaller and bigger harassment of common people happens concurrently. This prologue sequence perfectly evokes the era and sets the tone for consequent farcical happenings.

Soon, Stalin gets defeated by death. He is discovered in a puddle of his own piss and each of his savvy and cruel political operators compete for the highest position inside the Kremlin. They all know that the leader’s death will only escalate the atmosphere of treachery and political backstabbing. For now, Malenkov takes the temporary position as the head of state, although he is an ineffectual, image-obsessed clown. Beria hopes to wield supreme power by exploiting Malenkov’s inefficiency, while Khrushchev is eager to sway the military and other committee members to his side. Meanwhile, Stalin’s alcoholic, mentally unstable son Vasily (Rupert Friend) and grief-stricken daughter Svetlana (Andrea Riseborough) try to figure out their fate in this crazily authoritarian climate. Riddled with hilarious verbal face-offs, Iannucci depicts how power vacuum amps up the ridiculous and vicious nature of politicians. Nevertheless, the relentless gags settle down at some point and the narrative slowly reaches for a chilling conclusion. Eventually it delivers a fierce gut punch, and this distinct perspective on the hypocrisy of political leaders perfectly resonates across broader political spectrum. 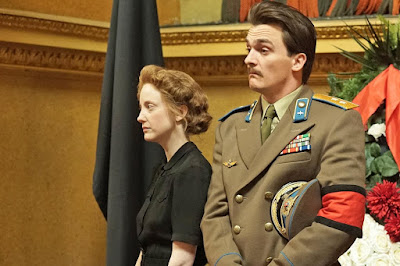 Iannucci and his co-writers David Schneider, Ian Martin marvelously builds up the silliness and horror-show of Stalinism, while also flawlessly extracting the utter madness in each scenario. The real events after Stalin’s death is a bit exaggerated and facts are slightly blemished. Nevertheless, Iannucci instills fine emotional truth to the proceedings, something which even the well-researched historical documents fail to deliver. There’s priceless quality to the morbidly amusing, insult-laden dialogues and the actors articulating those words makes it further great. Of course, the film’s biggest treat is its glorious ensemble cast. The inclusion of Monty Python’s Michael Palin to play Molotov and Jason Isaacs as the macho war hero Zhukov is the masterstroke in casting process. Steve Buscemi is at his usual best, adding a lot to the bleak image of the real historical figure. The ultimate success of the movie lies in its balance between the comedy and horrific tragedy, and in knowing which is which. It guides us into the depths of hell through the funny scenario. And, when the laughs dry up the sense of terror slowly sinks in. We contemplate on how these crazy things really happened and that we are always just one bad leader or one vile administration away from embracing the same historical mistake.