BlacKkKlansman [2018] – A Flawed yet Impassioned Look at U.S. Race Relations 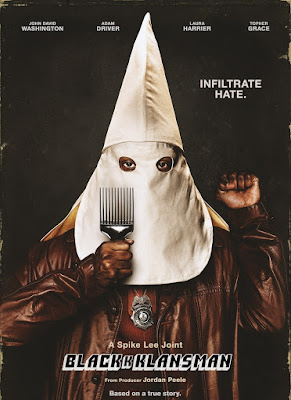 Spike Lee’s brilliant biopic Malcolm X (1992) opened with the image of American flag burning into shape of X. In his latest witty as well as agitated crime-drama BlacKkKlansman (2018), Lee finishes with the shot of an American flag in black-and-white, depicted upside-down, underlining the country’s civic plus political distress of the past and present, and also sounding alarm bells for the future.  BlacKkKlansman, however, is not one of the director’s strongest works although it thoroughly entertains us with an intriguing serio-comic tone (and retains all his attention-grabbing stylistic flourishes). The film is based on stranger-than-fiction true story (or as the opening credits says, “some fo’ real, fo’ real shit”) about a African-American rookie detective in the Colorado Springs police department in 1970s who infiltrated the local wing of Ku Klux Klan by impersonating as a white racist over the phone.

John David Washington (son of Denzel) plays Ron Stallworth, who proudly wears his black identity and happens to be the first black police officer working at Colorado Springs police force. The Stallworth memoir this movie is based on is set in the late 1970s, but the director moves the setting to Nixon-era to easily extrapolate the messiness of early 1970s to the present. Assigned (condemned) to records room, Ron requests the chief for an undercover gig. Typically, his first task was to pose as an audience member at a speech delivered by civil rights-activist Stokely Carmichael aka Kwame Ture (Corey Hawkins) and report for possible subversive activity. There he also meets student activist leader Patrice (Laura Harrier), who displays aversion for cops. Ture’s vibrant speech makes a huge impact on Ron and other young black men and women. Director Lee keeps cutting back to the black faces absorbing the fierce words, which ends with a pulsating chant “All power to all people!” This moment of awakening might be the reason why Ron picks up the phone at office next day and calls a number listed on a KKK ad published in the local newspaper. 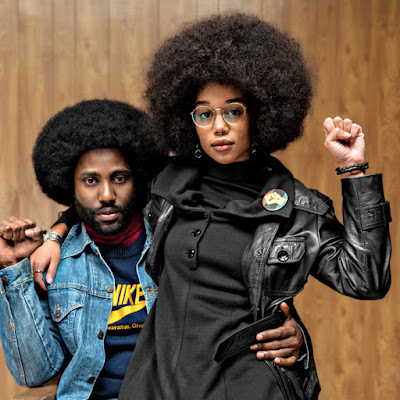 Adopting an amiable ‘white’ voice, Ron begins to drop in slurs about how he hates Jews, black people and every other foes of the Klan. He also narrates an incident about an ‘n—er’ who put his “filthy black hands” on his “purest white-driven-snow” sister. Impressed by Ron’s rhetoric, the Klan leader of the local chapter (Ryan Eggold) offers an in-person invite. Of course, Ron can’t go to the meeting and he solves that problem by wiring and sending his partner Flip Zimmerman (Adam Driver). The single undercover entity, played by two men, gradually takes steps to expose any violent plans hatched by the hostile and dimwitted racists. Eventually, the undercover job isn’t all just about Ron getting increasingly aware of his identity. Even the Jewish Flip confides how the Klan’s hatred contemplates his own identity (“I wasn’t raised with any real religion or sense of difference. I never thought about it before. Now, I’m thinking about it all the time”). Considering America’s revamped ethno-racial identity politics, it’s a resonant truth that’s casually tossed off.

Spike Lee largely wants us to laugh at the deceptively simple ploy: a black and Jew rooting out the absurdity and alarming misguided aspirations of the Klan. Back when Lee was a student at NYU Film School, his professors said to have lauded the formal brilliance of D.W. Griffith’s Birth of a Nation (1915) without touching upon the movie’s outright racist message. In fact, Lee’s student film that served as a response to this approach caused problem with his professors. In BlacKkKlansman, Lee brings in veteran singer, activist and actor Harry Belafaonte to insist on the silent feature’s poisonous effects (considered to have renewed the KKK when it was on the decline), which is still regarded as a formative film history text and landmark of narrative film-making (Lee also takes shots at the alleged Hollywood epic ‘Gone With the Wind’). He doesn’t care about getting under the skin of white racists. He makes those characters deliberately cartoonish in order to fiercely counterbalance the swaggering tone adapted by Griffith’s century-old movie. 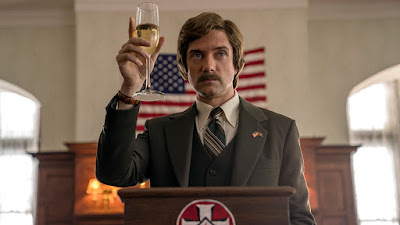 Like Do The Right Thing (1989), what lays beneath Lee's narrative surface is a boiling rage on the continuity of racial injustice. But unlike that masterful dark comedy, Lee goes for a purposefully palatable message for the mainstream viewers in BlacKkKlansman. Starting from the way the title is rendered to Alec Baldwin cameo as an unabashed bigot (who very much sounds like the guy desiring to “make America great again”) to using Charlottesville footage, the director avoids subtlety which he feels not the right tone to depict a society that’s imploding. Lee rather employs the tools of melodrama, put together for Griffith’s virulently racist content, to demonstrate how centuries of racial hatred have seared its way to the present (and would in the future), denying reconciliation and widening the rift.

Lee does struggle in handling the unsettlingly tense and comic quotient in the script (penned by Lee, Charlie Wachtel, David Rabinowitz, and Kevin Willmott), even though he makes up for some of the tonal flaws with his trademark visual panache (the Klan initiation scene juxtaposed with Belafonte’s painful recollection was one such example). The writing too suffers from not providing a semblance of interiority to the characters. John David, Adam Driver, Jasper Paakkonen, Topher Grace, etc delivers commendable performance, but their respective characters are only explored on the surface level. Nevertheless, Lee’s pointed sociopolitical message throws gut-punches at the right occasions. Altogether, BlacKkKlansman (136 minutes) is an engrossing and galvanizing melodrama which gains its distressing, raw power by bitingly relating it to hot-button issues of Trump era.

at November 13, 2018
Email ThisBlogThis!Share to TwitterShare to FacebookShare to Pinterest
Labels: 2018 Movies, Based on True Story, Social Drama