Konstantin Lopushansky’s heavily textured, nightmarish cinema projects a future for humankind that looks prophetic, although we wouldn't hope for it to happen. Lopushansky, who worked as production assistant for Andrei Tarkovsky in Stalker (1979), made his diploma short film Solo in 1980. His debut feature Letters from a Dead Man (1986) is a believable nuclear holocaust drama that drew parallels with Tarkovskian landscape of Stalker. In fact, popular Soviet sci-fi author Boris Strugatsky (Boris and Arkady Strugatsky were the authors of Stalker’s source novel) co-wrote the script for Letters from a Dead Man (alongside Lopushansky and sci-fi writer Vyacheslav Rybakov). After this international festival hit, Lopushansky’s second feature A Visitor to a Museum (1989) also focused on a hellish post-apocalyptic landscape. Though ‘A Visitor’ is a bit heavy-handed than ‘Letters’, it once again emphasized the filmmaker’s stunning creative vision. 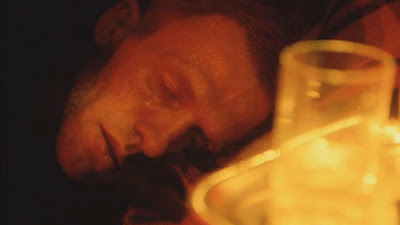 Letters from a Dead Man depicts the life in an underground shelter after a nuclear explosion. The yellowish-brown coloration sets the narrative’s somber emotional t one. Unlike any post-nuclear-holocaust cinema, ‘Letters’ had a unrelenting harsh realism which allowed us to deeply absorb the stunning tableau of visible devastation as well as the crushing of human spirit. The central character in ‘Letters’ is a Nobel-Prize winning atomic scientist (played by Rolan Bykov), who feels that he has contributed to the destruction of the world. He channels his agony into the letters he writes to his dead son, Eric. Riddled with philosophical and religious themes, ‘Letters’ portrays the humans’ innate need to search for truth, hope, and meaning, nuclear winter or not.

‘Visitor’ is also a futuristic fantasy where its wandering protagonist strives to make a meaning in an insane, desolate landscape. The prevailing color palette here is red, indicating the hell created on earth by human kind where a tenuous affirmation of hope seems impossible. In fact, both Letters and Visitor were addressed as Lopushansky’s ‘yellow’ and ‘red’ movies respectively. While life came to an end due to nuclear explosion in ‘Letters’, in ‘Visitor’ the extinction is caused by an ecological disaster. Climate change and devastation of the environment are the reasons for this post-apocalyptic tragedy. A majority of the new generation of humans are biologically affected and they are labeled as ‘degenerates’, banished to the 'reservations', situated closer to the industrial dump sites. Red flames decorate the windows of ‘normal’ yet somewhat mentally deranged townsfolk homes to keep out the runaway ‘degenerates’.

A Visitor to a Museum opens with a nameless ‘tourist’ (Viktor Mikhaylov) taking the garbage train and walking through miles and miles of garbage to arrive at a coastal town situated near a dead ocean. He reluctantly identities himself as a city dweller and enquires the locals about reaching a museum, which is as large as a city but now flooded by the dead ocean. The mysterious museum, however, is accessible for a week at low tide. It is made clear that the ocean floor is covered with toxic sludge and that many have lost their way during the arduous walk. The tourist is determined about making the pilgrimage and signs the mandatory registration form. Waiting for the low tide, the tourist stays at a local guest house, a former weather station. 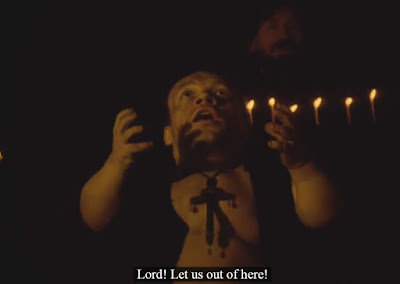 The older couple who hosts the tourist also gives shelter to a young ‘degenerate’ man and a woman. The husband is sort of doing a social experiment by attempting to ‘educate’ and ‘civilize’ the ‘degenerates’. Loathed for their limited intellect and susceptibility to religious hysteria, the young man and woman work as ‘servants’ for the ‘normal’ healthy old couples. The tourist, however, is more fascinated by the religion of the phyiscally deformed people, and sought out their monastery and priest. In fact, we learn that the flooded museum is not a symbol of science and rationality, but rather has religious importance. As much as he is drawn to the ‘degenerates’, the tourist is tormented by the manifestation of visions from near-future.

Gradually, for the ‘degenerate’ masses, the tourist unwittingly becomes a messianic figure and his pilgrimage to ruinous museum is of utmost importance to them. The children of apocalypse organize an elaborate ritual before preparing him for the trip. The disoriented tourist walks through the ocean in low tide, but he is unable to make a meaning out of the journey. The narrative ends with a long, devastating shot of the nameless tourist, screaming and walking through garbage-strewn landscape with a fiery red sun in the background.

I felt a sense of detachment with the proceedings in ‘Visitor’, most definitely due to its unapologetically strong religious themes. ‘Letters’ also withheld religious themes, particularly the sequence involving the scientist and traumatized mute children making a Christmas tree. In ‘Letters’, faith rejuvenates the human spirit and crystallizes the thought of hope. ‘Visitor’ denies any possibility of hope, but utilizes the chunk of running time to showcase the ascension of tourist into a Christ-like figure. Without question, it’s all mesmerizingly shot. But unlike ‘Letters’, the heavily theological second-half of ‘Visitor’ fails to create any emotional impact although the terrifying imagery and oppressive atmosphere keeps us enthralled.

‘Visitor’ could be read on two levels. On one hand – as its dense religious symbolism suggests – it seems to speak of mankind’s movement away from God, in the name of scientific progress. Mankind is utterly barren of spirituality that he can’t derive any meaning out of God’s words. In one of the brilliant scenes, a unhinged old man requests the visitor to randomly suggest a passage from the scripture which he hopes would tell his fortune. But unable to conjure any meaning out of the words, the old man sadly remarks, “completely incomprehensible. Can you explain it to me?” In another scene, we see the cultured man of the guest house trying to educate his ‘servant’ by questioning, “what has man created in his time on earth?” The other somberly replies, “Man has created a trash heap”. Through these moments, writer/director Lopushansky emphasizes on how rationality and scientific indulgence has led mankind towards self-destruction.

The tourist or ‘visitor’ burdened by the collective guilt of mankind that strayed from God seeks redemption through his odyssey. But then it becomes apparent that it’s too late to stop humanity’s march towards self-destruction or to right the ‘sins’, which in the end is the cause for the tourist’s incessant screams. Or it isn’t such a strongly underlined argument of scientific rationality v. religious faith. What people believe gives them the strength and it generates meaning. Humankind’s existence is closely related to their perpetual search for meaning. Lopushansky probably posits that this search– in scientific rationalization or religious faith – creates an unbreakable pattern that will eventually lead to societal breakdown and madness. 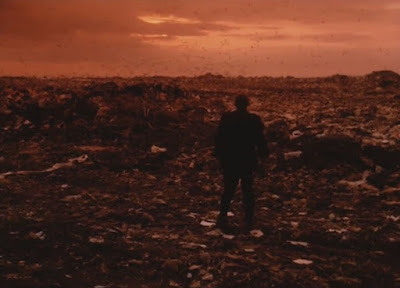 The aimlessly wandering and shrieking tourist has now understood that everything is utterly devoid of meaning, and in a post-apocalyptic landscape sanity can’t be maintained by creating meaning for oneself. He now knows that we were destined to create hell. Moreover, God - if there is one - doesn’t care. In fact, Konstantin Lopushansky who is interested in Christian philosophy makes up such captivating purgatorial landscapes to reinforce the idea of the horrors of a godless world.  Whatever, our interpretation of Lopushansky’s snapshots of futuristic hell is, he successfully breaks away from the conventions of science fiction cinema to bestow thought-provoking narratives on human condition (irrespective of the coldness).

at March 29, 2021
Email ThisBlogThis!Share to TwitterShare to FacebookShare to Pinterest
Labels: Russian Cinema