Emitai [1971] – A Thoughtful African Perspective on the Colonial Era

Ousmane Sembene, who has made a series of seminal Senagalese movies, is generally hailed as the ‘father of African cinema’. Born in 1923, Sembene has worked at the docks of Marseilles, where he got acquainted with French trade union movement, and later the commuist party. He wrote his first novel Black Docker in 1956 and his much acclaimed novel God’s Bits of Wood in the year 1960. Since Sembene felt writing could only enable him to reach the circle of cultural elite, he opted to get trained in cinema from a Moscow film school. He made his first short Borrom Sarret in 1963 and his first feature film in 1966, titled La Noire de (‘Black Girl’). While Sembene’s first two feature films – Black Girl and Mandabi (1968) – dealt with neocolonialism, i.e., set in the period after Senegal’s independence from France (on June 20, 1960), his third film Emitai (1971) is set in the colonial era as French troops abducted young African men to fight in World War II.

Sembene’s cinema has repeatedly offered counter-narrative to the colonizer’s representations of Africanness. Some of his earlier films, including Emitai, exhibit a kind of cinematic roughness compared to the smooth production techniques employed in European and American cinema. But Sembene’s uncompromising subject matter and his ability to innovate filmic medium as a way of fighting against neocolonial oppression make him one of the influential members of the ‘third cinema’. The term ‘third cinema’, first coined by Argentinian film-makers Fernando Solanos and Octavio Gettino, hints at the use of revolutionary film techniques to shine light on the condition of disenfranchised people around the world, and to further arouse them to come together and revolt in masses. Of course the radicalism promoted in such films encountered threat of censorship, ban, and imprisonment (‘third cinema’ largely met its demise in the age of globalization). 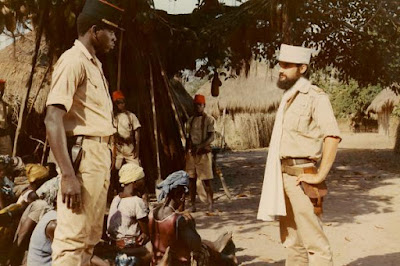 Ousmane Sembene has once declared that, “We have to have the courage to say that in the colonial period we were sometimes colonized with the help of our own leaders. We mustn't be ashamed of our faults and our errors.” Perhaps, this remark is at the heart of every Sembene’s rich, complex dramas that tackle the myriad ways the colonial era and neo-colonialism is haunting the African consciousness. Apart from the unsavory portrayal of the French colonizers, Sembene persistently alludes to patriarchal dominance in the tribes. Interestingly, the film-maker suggests the rise of Abrahamic religions and European colonialism in the African region as the reason for an oppressive patriarchial system. Women in traditional African system is said to be largely free from sexual exploitation and oppression. It is alleged that only with the colonialist suppression, the women’s status in African society and the egalitarianism of ethnic tribes were lost. Emitai echoes this line of thought and it’s expressed more profoundly in Sembene’s swansong, Moolade (2004).

Emitai revolves around the Diola people, a small ethnic minority living in the Casamance region of Senegal (the region of Sembene’s birth), who possesses distinct culture, gods, and language. The elders in Diola act as a kind of spokesperson, conversing and learning the mandate of gods and spirits (‘Emitai’ is the name for their ‘god of thunder’). The tribe’s women take over the major responsibility of cultivating and harvesting the rice crops. The Diolas believe rice crop is sacred and it is the property of the gods. Emitai opens with able-bodied young men of Diola village abducted and then recruited for French Foreign Legion. 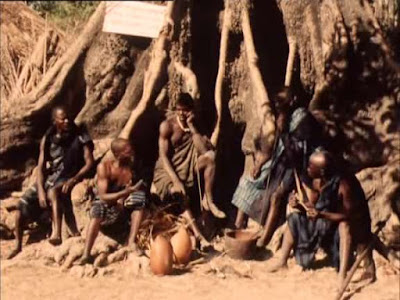 The colonial troops are enlisted to serve in the army of Marshal Petain. As World War II escalates and foreign troops increases in number, the colonial administration impose a new rice tax across Senegal. Fearing resistance, troops march with guns to seize 50 tons of Diola’s rice-crop. The elders, including the village-chief, wait for gods’ counsel in front of a shrine. But the gods stay silent despite the ritual sacrifices to appease their anger. Meanwhile, the black African soldiers, under the orders of a French commander, round up the village’s woman. The Diolas may have lost their sons and brothers to the French colonizers, but the rice solely meant for spiritual sustenance couldn’t be given up. The elders’ humiliation, the women’s resistance, and the savagery of the French allow Sembene to construct a multi-layered examination of ruthless colonial economy and inflexible cultural beliefs.

It could be argued that the rice cereal, primary reason for the conflict and the eventual tragedy, could be given away by the villagers since it’s largely needed for religious ceremonies. The French argue they need it for their troops at war. But towards the film’s end, there’s news of Marshal Petain getting replaced by General de Gaulle and subsequently the French demand for overseas food is put into question. Moreover, Sembene doesn’t attune to official history and hail de Gaulle as the hero who resisted Nazi rule. For the West African soldiers who take this change with bafflement (ironically they only argue over the ludicrousness of a 'General' taking over from a 'Marshal'), there are no fundamental differences and they are still colonized subjects of the French empire. 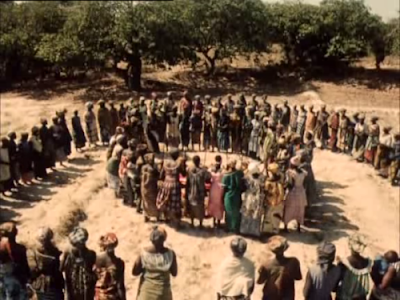 From an aesthetic perspective, Emitai, similar to all other Sembene’s movies, promotes framing techniques that keeps certain distance from individual characters, for the purpose of contemplation as well as to wholly regard the collective tribal society. Sembene use of language is particularly interesting in Emitai. The elders of Diola use language to make decisions for the collective. Yet the language only serves to divide them as they repeatedly talk of the humiliation and stay in their corner. The Diola women rarely utter a word in the narrative, but they use silence to take a collective action against the French.

The gods in Emitai more or less serve as dreadful phantoms that look as much threatening as their colonial oppressors. In one dreamy sequence when the village chief’s life fades away, Sembene takes us into the reality of the Diola’s religious belief. The sequence respects as well as subtly undermines the native customs and traditions. Nevertheless, Sembene believes that the rituals and customs cause less harm than the ones caused by foreign colonizers. In his after-life, the village-chief appears in front of gods and denounces them for their inaction as if he is their equal, but the same inclusiveness couldn’t expected from the 'foreign devils'.

Emitai (97 minutes) certainly suffers from the kind of visual roughness, found in most of ‘third cinema’. The non-professional actors also couldn’t do much to smooth out such problems. However, film-makers like Ousmane Sembene bring forth a more plural, ambiguous vision of African history, social structure, and culture which isn’t tainted by the Western influences.