British Author John le Carre’s legendary character George Smiley is anti-James Bond. He fights enemies with intelligence and his battlefield is a drab office interestingly referred to as The Circus. Unlike the revered on-screen man-child intelligent agent, Smiley has erudite grasp on using the double-edged sword known as violence. American novelist Brian Garfield with his 1975 novel Hopscotch about a bored ex-spy also deviates from the Western adolescent fantasy life of James Bond. The veteran field agent of Garfield too doesn’t carry a gun even in life-threatening situations and smoothly resolves the conflicts by relying on intelligence. But Garfield’s novel is a light-hearted riff on spy genre without much of the hard-hitting, closer-to-reality tightrope situations experienced in John le Carre’s novels. In Garfield’s logic-defying espionage scenario, the utterly hopeless predicament of the protagonist is transcended through feisty, humorous games (pretty much like the one hinted in the title) rather than violent combats. 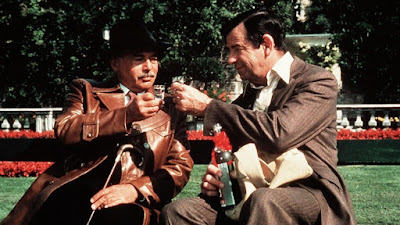 Brian Garfield’s Hopscotch originally went up to Warren Beatty and Jane Fonda. But when WalterMatthau - the master of cantankerous comedy - came onboard to play the protagonist, the script was re-written out and out as a wry comedy. British writer/director Bryan Forbes (Whistle Down the Wind, Séance on a Wet Afternoon, The Whisperers) was initially set to direct the movie (he co-wrote the script with Brian Garfield) but he was later replaced by fellow British film-maker Ronald Neame. Mr. Neame was one of the important figures in British cinema who has collaborated with cinematic masters like David Lean (as co-writer & producer for Brief Encounters, Blithe Spirit, Great Expectations) and Alfred Hitchcock (worked as assistant cameraman).

Venerated as director’s actor, Mr. Ronald Neame efficiently juggled between the roles of director and cinematographer, bringing out career-best performances from fine actors -- Maggie Smith in The Prime of Miss Jean Brodie (1969), Alec Guiness in Tunes of Glory (1960) and The Horse’s Mouth (1958), Hayley Mills in The Chalk Garden (1964), and Judy Garland in I Could Go On Singing (1962). Director Neame has associated himself with projects of different genres – from action adventure, comedy to thrillers and biopic dramas. Before directing Hopscotch, Ronald Neame has made two intriguing comedies – The Horse’s Mouth (1958) & Gambit (1966). While Hopscotch wasn’t a singularly outstanding work in the long career span of both Bryan Forbes and Ronald Neame, it certainly is a very entertaining spy comedy, unlike some of the bland genre exercises in contemporary Hollywood cinema.

Walter Matthau plays an ageing CIA field agent Miles Kendig, cloaked in trench coat and his face wearing a persistent frown. He is stinging a group of Russian spies wandering around Munich’s famous Oktoberfest; back when cold war reached threshold point and when Munich was in West Germany. The sting is a success as Kendig perfectly corners his Russian counterpart Yaskov (Herbert Lom). He gets back the stolen intelligence from Yaskov, but lets him depart with a cordial greeting. Kendig’s hard-bitten, no-nonsense boss Myerson (Ned Beatty) who doesn’t understand the subtlety of quid pro quo (or backscratching methods) punishes Kendig with a desk job. 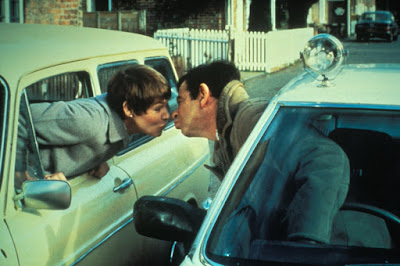 It’s hinted that Myerson has sucked up to Nixon administration and rised to the top ranks of CIA by taping influential people. Kendig’s don’t-give-a-damn attitude fires up as he concocts elaborate plans to get back at Myerson. Kendig begins the game by shredding his personnel file and by threatening to write detailed memoirs which may embarrass all the intelligent agencies involved in the cold war. When Myerson and his clueless cohorts takes Kendig’s bait the narrative moves through uniquely hilarious situations. Helping Kendig on his lucrative final mission is the former-agent & ex-lover Isobel (Glenda Jackson). Heading the operation to hunt-down the old, rogue spy is Joe Cutter (Sam Waterston), Kendig’s protégé who is always one-step behind in figuring out Kendig’s globetrotting adventure.

Hopscotch is more watchable for Matthau’s rendering of smug and unapologetically decadent Miles Kendig. Listening to Mozart while shaping his memoir on a typewriter, uproariously humming opera at the border checkpost, and completely failing at mimicking different accents, Matthau’s Kendig is a very idiosyncratic movie spy. Unlike modern rogue spies, Kendig doesn’t boast any noble intentions for his unpredictable revenge trajectory. He makes it clear that it’s an act of selfishness and a display of arrogance. But Matthau adds lively, miniscule touches to his portrayal that we persistently root for his anti-authoritative stance, irrespective of the eventuality.

Bryan Forbes and Brian Garfield’s writing may lack some spark to make it spectacular (it’s too relaxed at times), but their character sketches and nuanced comedic situations are nothing short of impeccable. Ned Beatty’s enraged yet inept Myerson makes up the perfect counterpoint to Kendig. The revenge solely channeled at Myerson is punctuated with undeniably funny punchlines, the highpoint being the encounter at Myerson’s estate where Kendig smartly hides. Some of the plot turns remain elemental compared to the brilliantly conceived verbal jousts (for instance, the confrontation between Kendig and Cutter in the hotel room balances comedy and poignance). The other winning aspect of the movie is the unforced chemistry between Matthau and Glenda Jackson. Their amorous teases somewhat serves as an emotional crux of the narrative.

Hopscotch (105 minutes) may encounter the complaint of possessing standard-fare or bare-bones plot structure and predictable happy ending. But it retains a sense of charm that may wholly please viewers of dry, quirky comedies.

at June 03, 2021
Email ThisBlogThis!Share to TwitterShare to FacebookShare to Pinterest
Labels: Black Comedy