Samuel Michael Fuller was one of the greatest maverick American film-makers whose unpredictable genre movies oft posed incendiary critiques on the decadent and hypocritical nature of the American Establishment. As a master stylist with a penchant for social justice, Samuel Fuller inculcated revisionist spin on genre set-ups or stock story-lines. Since he perpetually assailed the inherent bigotry and prejudice of the American collective consciousness, he was less regarded at home - especially at the height of cold war when he turned out his best works - and more celebrated at the European countries, mainly in France. Fuller did a cameo in Jean-Luc Godard’s “Pierror le fou”, explaining what is cinema at a Parisian party. 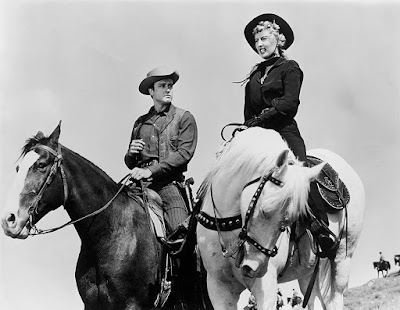 In a Guardian article,celebrated German film-maker Wim Wenders states, “Some men look at the world and all they ever see is money. Others see nothing but real estate. For others again, it all boils down to power, fame, or honour……For Sam Fuller, the world condensed into stories. That's what he saw wherever he looked. Whatever reality, incident, fact or event presented itself, he saw it as narrative material.” Born in August 1912, Fuller roamed across US to write for newspapers during the Great Depression (his firs job was newsboy). He was a crime reporter in New York at the age of 17.

This passsion for pursuing after stories eventually turned Fuller into a scriptwriter and novelist. He enlisted after Pearl Harbour and worked as an infantryman rather than safely positioning himself as a war correspondent. The copious notes he took during his war experiences perhaps pushed him to make one of the greatest war films – The Big Red One (1980). Fuller made his directorial debut in 1949 with I Shot Jesse James. Fuller’s cold war noir movie Pickup on South Street (1953) was his first critically acclaimed feature.

Before Pickup on South Street, Fuller made The Steel Helmets (1951), one of my favorite American war films (set during Korean War), which showcased the true patriotism of the soldiers while also exposing the incredulity of sending its citizens to fight a war on faraway lands (something that was unprecedented at 1950s Hollywood). Fuller was repeatedly criticized or simply dismissed for tackling B-movie storylines. Although his movies like Shock Corridor (1963), The Naked Kiss (1964) had an exaggerated, pulp-ish storyline, the viscerally dynamic and complex camera movements pushed the thematic boundaries of the simple plot. For example, the fascinatingly radical scene in Shock Corridor that chronicles the fate of Trent, an African-American student who is driven insane by rampant racism in the South and now envisions himself as a Klansman. The great Martin Scorsese once said, “If you don’t like Samuel Fuller, you just don’t like cinema”.  Despite the scorn that’s showered upon Fuller’s plot and dialogues, his idiosyncratic visual signature captivatingly presents us an intense world where the hysterical struggle for survival is ubiquitous and love is a scarcity. 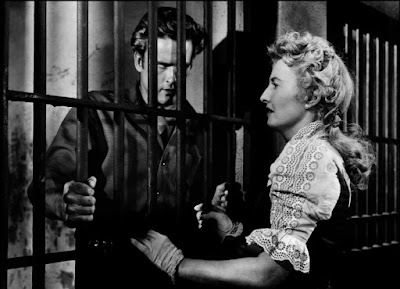 Samuel Fuller’s revisionist Western Forty Guns (1957) saw the filmmaker operating at the height of his storytelling powers. Critics categorize it as a ‘matriarchial Western’, since lik Fritz Lang’s Rancho Notorious (1952) and Nicolas Ray’s Johnny Guitar (1954), the film had a strong female character who doesn’t want to succumb to the familiar ethos of American Frontier culture. Forty Guns, filmed in glorious black-and-white widescreen canvas, had the technical panache and eccentricity (including the relentless sexual innuendo) of Ray’s Johnny Guitar and the emotions of a Sirkian melodrama.

The film opens with US Marshall Griff Bonnell (Barry Sullivan) and his brothers – Wes and Chico -- riding a cart across a vast stretch of land. The brothers suddenly pull up and with a dazed expression they watch Jessica Drummond (Barbara Stanwyck) draped in full-black riding high on a white stallion, followed by 40 men upon a uniformly galloping horses. She is ‘a high ridin’ Woman with a whip’ sings the town’s balladeer. The encounter leaves the Bonnell brothers to be covered in dust and later discuss their plans to the familiar local guys at the bathhouse. The brother characters were pretty much confirms to the myth of Wyatt brothers, especially Griff Bonnell who like Wyatt Earp inspires glorious, tall tales. Griff has a warrant for the arrest of Howard Swain (Chuck Roberson), a simple job complicated by the fact that he is one of the 40 men working for Jessica.

Jessica who is respectful to Griff doesn’t seem to be posing any trouble. She is a very influential rancher in Tombstone. But her weak-minded, trigger-happy younger brother Brockie Drummond (John Ericson) is whole another matter. Immediately after Griff’s entry into the town, Brockie and his cohorts shoot up the town in a drunken stupor. Then comes a beautiful mix of tense montage shots, which precedes Sergio Leone’s elaborately detailed stand-offs, as Griff slowly marches toward Brockie, fixedly staring at him from the town’s center. However, Brockie doesn't draw the gun who is well aware of Griff’s reputation.

Griff simply pistol whips the boy that lands him in a jail cell. Jessica is naturally outraged, but she’s more interested in protecting her only brother than opposing the famous ‘legal killer’. Later, Griff totally earns her respect when he saves Jessica from a horrible dust storm. There are different subplots too: an outrageously raunchy romance between Wes Bonnell and a young Gunsmith; Chico wants to follow the path of his courageous brother and doesn’t want to be just a third leg. All these ultra-familiar elements of Western narrative tropes, however, are embellished by the persistently brilliant visual language. Griff imprisons the man he seeks and even develops a kind of intimacy with Jessica. But the troublemaker Brockie, devoid of tenderness, brings irredeemable tragedy. 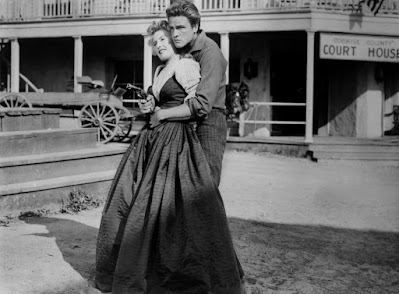 Forty Guns stands as a testament to Samuel Fuller’s master craftsmanship. Working on a very low budget ($300,000), Fuller’s visual expressions earnestly attempts to recreate the authentic Old West. The fact that he made a very effective tornado/dust storm scene remains as a marvel. Fuller’s rich sense of styling continually sets it apart from the typical western. From the enchantingly wild close-ups to point-of-view shot through the barrel of gun to the masterfully kinetic crane and tracking shots to capturing the unrelentingly violent shoot-outs, the director extracts much style from the scenario to make it much more than a generic Western feature.

Although the film confirms to the strict rule of bloodletting, the deaths and sudden burst of violence are portrayed in a fairly shocking and realistic manner (the final gun battle was the most surprising). The cuts and dissolves are the other alluring aspect of Fuller’s films. In one scene, a minor character’s death in the jail cell is immediately cut to the shot of Griffin standing inside the cell (to examine the body), suggesting his now-imprisoned emotional state. Later, to suggest the upcoming downfall of Jessica, Fuller dissolves from a shot of her face to the shot of horses’ frenzied galloping.

The dialogues were unapologetically raunchy for its time, especially one encounter beteween Griff and Jessica: “May I feel it?” she asks pointing to the pistol, “It might go off in your face” warns the man, to which she replies, “I will take a chance”. The interplay between Wes and the gunsmith girl he loves is also doused with sexual innuendos (“I’d like to stay around long enough to clean her rifle” sighs Wes). The performances are uniformly good (not excellent). Fifty year old Barbara Stanwyck is more tender-looking than the enticingly dangerous femme fatale roles she did in noir cinema. It’s an interesting bit of trivia that Stanwyck did her own stunts (the dangerous one upon a horse). But Jessica's character is underwritten (mostly in the 2nd half) compared to Joan Crawford’s Vienna (Johnny Guitar).

Despite its light running time of 80 minutes, Forty Guns attempts to transcend certain fixed elements of the Western genre framework. Bolstered by Samuel Fuller’s masterful film-making style, the film is one of the understated, cult classics in the Western canon.

at June 24, 2021
Email ThisBlogThis!Share to TwitterShare to FacebookShare to Pinterest
Labels: Western