Birdboy: The Forgotten Children [2015] – The Quest for Freedom in a Strangely Horrifying World

Pedro Rivera and Alberto Vazquez’s Spanish animated feature Birdboy: The Forgotten Children (‘Pscionautas, los ninos olvidados’, 2015) is a gloomy yet beautiful impressionistic parable of survival in an unrelentingly cruel world. Based on the graphic novel by Vazquez, the film revolves around a group of emotionally damaged anthropomorphic animals living in an isolated island-town, which has lost much of its residents to an explosion at the toxic industrial plant. Hordes of surviving ‘rats’ form their own kingdom amidst the industrial trash-heap, calling themselves ‘The Forgotten Children’. 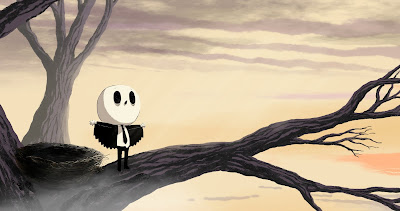 The scruffy rats live by a creed, spelled out by their leader: “The future is past. Garbage is the present. Blood is our law.” The other titular character ‘Birdboy’ has clearly become a recluse after the industrial disaster, pursued by a demonic force and also by the fascist police chief. The rest of the well-to-do talking animals of the town suffer from existential crisis and talks of moving away without actually doing it.

Birdboy’s slight story-line is told in the form of complex vignettes as each characters’ emotional journey is loosely interconnected. But what makes the film remarkable is its smorgasbord of hauntingly surreal imagery. Although the character drawing - often placed before muted backgrounds - and the realization of ecologically damaged town looks hand-drawn, the simplicity somehow works in bringing depth to the striking visuals. The story is largely centered on three teenage friends, hoping to escape the rubbish-scape and seek a better life in the big city.

Dinky, the smart white mouse, remains nonchalant towards her devoutly religious parents, who intend to crush her ambitions. Sandra is a bunny, who hears evil-voices. Then there’s Zorrito, a compassionate little fox always stereotyped as cunning and thief. Dinky is in love with the elusive and secretive Birdboy. Unbeknownst to the otherworldly terrors and authoritarian police chief (a straight-faced, sadistic canine), Birdboy, a sort of besmirched super-hero devotes himself to finish the task of his dead-father: to restore life in the island. Rounding up this array of colorful characters is a pig fisherman/drug-dealer whose mother's dying body hosts a hideous spider-creature. 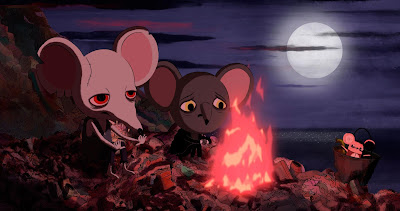 In ‘Birdboy’, the existential ennui boosted by the environmental decline, drug culture, depression, and vapid life-style, is not only directed towards the anthropomorphic characters. The residents also possess sentient objects like a time-obssessed walking-alarm clock, a lonely piggy bank, and an obnoxious yellow inflatable raft shaped like a duck. These designs of ‘objects with feelings’ inject a tone of comic absurdism that matches well with the directors’ uncanny visual ad thematic preoccupations.

Elsewhere, Rivera and Vazquez imbues a darkly surrealistic tone into the fantastical world that’s remniscent of the works of Jan Svankmejer, Priit Parn, Guillermo del Toro, and Tim Burton. Moroever, the realization of Birdboy’s secret natural paradise (a giant tree nesting countless number of birds) contains the warmth of Hayao Miyazaki’s drawings. Although ‘Birdboy’ is stuffed with outre elements, the characters do confront much of the real-world problems: drugs, violence, ostracism, bullying, and police brutality.

There are few outlandish features, conjured just for the sake of it: for example, a Little Baby Jesus squeeze toy that bleeds from eyes or Jonathan, a dog dressed to look like a boy or the glue-sniffing, copper-searching rat scavenger. Such array of oddness thrown within the vignettes threatens to make ‘Birdboy’ either disconnected or overstuffed. But thankfully, the medley of hallucinatory and expressionistic visuals keeps us consistently captivated. Serene as well as intense, Rivera & Vazquez’s compositions of watercolor-style skies, nightmarish macabre interior structures, and endearing character designs stand as a testament to their superme animation artistry.

Keeping in line with the dystopian atmosphere, many of the wide-shots has blank spaces or colorless gaps, which duly accentuates the bleakness. The relentless suffering and violence heaped upon the characters may seem exhausting from a storytelling standpoint. Nevertheless, the distinctly diabolical imagery makes ‘Birdboy: The Forgotten Children’ (76 minutes) a truly unforgettable animated feature of recent times.

nice post, by the way you can check this out Tandav Season 2 Release Date, Cast, Trailer, News