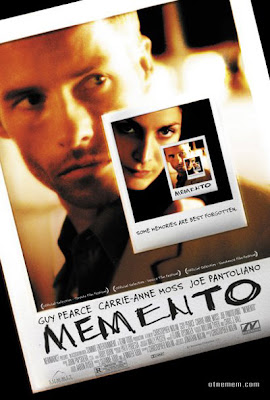 Memento is a terrifically compelling little mystery about short-term memory loss. Many might be familiar with the term, because it was the inspiration? behind the movie, Ghajini.  But forget Ghajini since it is one of the drop in the ocean of bland entertainment Indian movies. Memento is not just a revenge tale, it is a puzzle.
Memory - it is one of the key elements that separates human beings from animals. It is one of the basic building blocks of personality. Who we are is shaped as much by our experiences as by our environment. Memory can also be unreliable and easily influenced too. As shown in the movie 'Rashomon', if you ask three people to describe the same event, none of those accounts will be the same. After watching the movie, you might feel that 'short-term memory loss', is a contagious disease. The narrative structure is in a complex form, which constantly checks your memory.


Plot
Guy Pearce stars as Leonard Shelby, a former insurance investigator who suffered an injury which led to a rare condition, short-term memory loss. He remembers everything up to the night his wife was killed and he was badly hit to the head, but since then he's unable to retain new information. Faces, places, events, they all disappear from his mind after mere minutes. It's obviously a frustrating existence, but Leonard has something that keeps him going: his need to get revenge. 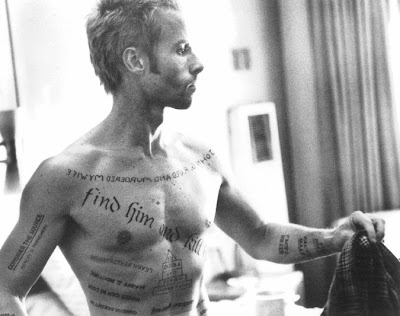 But how do you investigate when you can't remember what you find out? For Shelby, it's by being methodical, using a system of notes and Polaroids about each and every thing. He'll take a picture of someone he meets and scribble down basic information on it ("Don't believe his lies"). As for the most crucial facts, he has them tattooed on his body. Hence, written backwards (so he can read it in a mirror) on his chest is "John G. raped and murdered my wife"...

The plot might not sound too striking, it's the classic revenge story. What's really great is the way Nolan tells his story.


Analysis
Memento starts with the the last scene then going back to the one before, then the one before, and so on until we get to the first scene. Sounds confusing? Well, it can be, but it's also a fascinating concept. It sort of puts you in the same state of mind as Leonard. At the beginning of each scene, you have no idea how you got there, what exactly is happening and why, or what's the  history with the people Leonard knows. Most of the film is spent with many questions being raised, by Leonard and by the audience.

In one of the scene, we see Leonard (Guy Pearce) running and asks himself, "Ok so what am  I doing." Then he watches a man running parallel to him and says, "Oh I am chasing this guy." But that man stops and rises his gun, so Leonard thinks, "No he's chasing me." The sequences like this makes Memento, a absorbing and unique experience.


Part of what makes "Memento" so involving lies in the performances. Guy Pearce makes for a fantastic lead. He keeps the mind hopping throughout with his character's ordeal -  you believe in his anguish, his perplexity, his waking nightmare. Carrie-Anne Moss (as a bartender) and Joe Pantoliano  match Pearce with crucial supporting performances. But the real star here is Nolan, and the way he has edited this masterful thriller into its final format. 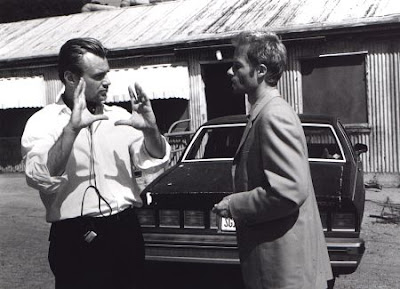 Director Christopher Nolan drawn the film from a short story by his brother Jonathan and comes up with a nifty narrative equivalent of Pearce's sorry state. By presenting events in Memento backwards, Nolan allows us to get into the mindset of the main character. And, although it might seem that an approach which reveals the story's conclusion in the first five minutes would lack tension, that's far from the case. Memento builds to a surprising yet completely logical finale, and there's plenty of suspense along the way to keep the viewer riveted. Nolan describes his movie not as a whodunit but as a "whydunit"


If you're not in the mood to think or ingest loads of information, as you struggle to hold onto the information which was passed along to you right before that, I suggest you not take part in the viewing of this film, cause you will most likely not appreciate it. It's for those who love films and don't mind endings that don't wrap everything into a tidy package.

Most films, in their own way, attempt to show some kind of grand Truth. Memento takes the opposite approach. It is a perverse tribute to the tyranny of cinema's adamant one-way flow. It is an unnerving, but deeply penetrating experience that elevates what could have been a routine mystery thriller into a meditation on the slippery nature of reality itself. Now where was I?

Memento - Imdb
Memento's narrative structure is wonderfully explained in Wikipedia, but i suggest you to read it after watching the movie.

Wasn't this the movie that shot Chris Nolan to fame?

Superb movie... Still as compelling as the 1st time... The Indian version was not even close...

I usually do not read reviews of any movie. It doesn't catch my attention while watching it. Hence i read only the foreword & analysis part of your post. I love the way you interprete. Thank you Arun.
Would like to hear about 'the artist' from you.

@Cynosure, Thank you and do watch it soon.

@Mak, Thank you. Sometimes it's better not to read the plot, so that we could interpret the movie in our own way.
And this is my review on 'The Artist'
http://movieretrospect.blogspot.in/2012/01/artist-celebration-of-cinema.html

yep.. i agree totally excellent style of screenplay in the movie. It takes a complete rotation from the first shot and ends in the same place..! the scene with the beer spattering! :D what a thought!!

This is the movie that changed my whole point of view about cinema. Its the one who made me fascinated about film-making.
Three years since I saw it first and by now I must have seen it about a hundred times. :) :)

@Vinay, Thanks for your comment. Memento changed my perspectives about movies.

Your posts on movies is well structured. I am a fan of Chris Nolan and have watched all his movies. Memento is a very catchy movie, tough to understand (if not read in imdb or not watched Gazni). Even what I like most is the chasing sequence!

@Gowtham, Thank you for the encouraging comment. You are right, tough to understand but a rewarding experience.

A movie that makes you think!