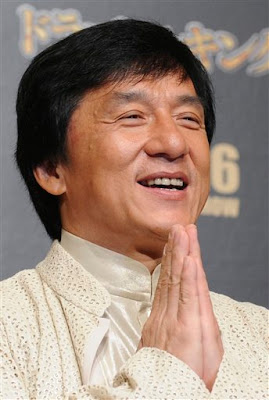 More so than even Bruce Lee or Jet Li or John Woo, Jackie Chan has represented the global image of 'Hong Kong Cinema'; a hyper-kinetic, breathless national cinema fashioned by impossibly fearless performers, and by prodigiously inventive choreographers (Chan, significantly, is both). The universal qualities of his films are those, which can be rarely delivered by Hollywood, nowadays. However, built into this implication is that Hollywood once did deliver such 'uncomplicated' pleasures, as is evidenced in numerous references to silent cinema (Keaton, Chaplin, Lloyd) or classic Hollywood musicals (those of Gene Kelly). This casts Chan as Hollywood's 'lost innocence', an alternative to high concepts and special effects.

Certainly, the silent cinema/Hollywood musical comparisons, while limited, stand as a reminder that there is more to cinematic pleasure than the classical 'well-made' film. In Jackie Chan's body of work, with some exceptions, the text is the set-piece -- no article or book, Chan's autobiography included, is complete without a list of his ten best fights or stunts. This suggests a kind of cinematic attraction called 'ecstatic cinema', which transports spectators 'into realm of rapt, anticipation of absolute pictorial and auditory momentum.' The danger is, however, that such accounts can easily conspire with a patronizing 'trash artistry', celebrating Hong Kong as a 'cinema of mindless pleasures'; never mind the quality, feel the stunts. 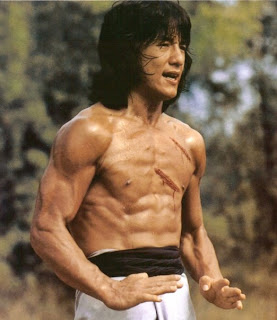 Chan's ingenuous persona, vulnerability, and mixture of comedy and action have been celebrated as an antidote to the machismo and heartless irony of western action cinema, an anti-Arnold and Tarantino rolled into one. Although such accounts are well meaning, they are sometimes a little light on considerations of Chinese masculinity and heroism or on the context for Chan's persona. Chan's films mediates between a need for individual action and respect for the value of nurturing a group orientation based on selflessness and humility. Chan-fandom emphasizes his work for charity, his love for and friendliness towards his fans -- qualities which support rather than contradict his bravery and martial skills.

References to Keaton, Chaplin and Kelly point to another key aspect of Chan's public persona, namely the star-auteur as performative genius. Chan's filmography encompasses a multiplicity of film-making roles -- director, producer, choreographer, stuntman, co-head of Golden Way films -- and his role is rarely confined to performer alone. Behind-the-scenes projects like 'Jackie Chan : My Stunts' explore his 'creative process (improvisation and brainstorming with his stunt team) and promote the stuntman as star, choreographer as auteur, self-endangerment as popular art. Chan's reputation hinges on 'control', even over those films which he has not nominally directed; several of his directors have walked off his films, willingly or otherwise.

Relatively speaking, he is one of Asia's most expensive film-makers; costly period re-creations, international settings, but more importantly for the legend, fights which takes months to film, multiple takes and, of course, lengthy stays in hospitals.

Chan's popularity is one of the paradoxes of global popular culture; for most of the last three decades, he has managed to be a cult figure and an international superstar at the same time. Prior to release of Rumble In The Bronx (released in the US in 1996), he was little more than a cult figure in the west, a cult fostered since the early 1980s by video rentals.

' In Asia....... I am Jurassic Park. I am E.T.', Chan claims. But in another sense that is precisely what he is not - 'We are very poor....... The only choice I have is dangerous stunts.' However, this statement is not entirely true -- as witnessed in the lavish spectacles Wong Kar-wai and Tsui Hark deliver on small budgets -- but there is something irresistible about the 'real' body pitted against the tyranny of digital, the Drunken Master versus the Titanic or Avatar. But Jackie Chan is no cinematic primitive -- his control over camera placement and (largely invisible) editing is as meticulous as his control over bodies in motion, and his multiple tasks often functions as 'action replays' of jaw-droppingly real on-set events.


Rather, Chan has astutely gauged those elements of Hong Kong cinema that Hollywood cannot absorb or copy. He is fond of chiding American stars for not doing their own stunts and American stuntmen for being too slow. But he also differentiates himself from other, more stylized, Hong Kong film-makers, those who do incorporate technology visibly into action scenes or foreground the artifice of cinema -- the invisible wires (even though he has adapted these technologies, but only recently), MTV-cutting and under-cranking of 'new wave' martial arts films such as Tsui Hark's 'Once Upon a Time In China' series. For Chan, cinema is in the service of the body.

I also heard that in one of his biography or hagiography, there is his performative achievements and impeccable details regarding the 'chronological account of every broken bone and crushed head, broken finger and twisted knee.'

Few Hong Kong film-makers have enjoyed Chan's longevity. His career spans the most significant period in Hong Kong cinema -- from the Mandarin-language kung fu films of the 1970s (Hong Kong cinema's first global export) to the new Cantonese cinema of the 80s, 90s, and the last decade, which looked to Hong Kong itself for its thematic and narrative content; from the island's 'economic miracle' to the turmoil generated by the 1984 Sino-British Joint Declaration returning sovereignty to China.

There is a set-piece in most Chan films where he is attacked from all sides, parrying furiously, receiving as many as blows he successfully blocks or returns -- the culture-shock of rapid modernization and urban transformation translated into a flurry of high-impact action. Neither the handover of Hong Kong to China nor his belated success in Hollywood  has stopped him making successful films in the now depleted Hong Kong cinema. Unlike other emigrant Hong Kong film-makers, Chan has worked in both industries with huge success. He is truly a transnational figure. At best, Hollywood seems to offered him a new status as a brand-name for a type of spectacle it cannot actually produce.

Jackie Chan has earlier, this year cited that 'Chinese Zodiac' ( which he wrote, produced, directed and coordinated fights) releasing at the end of this year will be his last action movie. He said, "I am not young any more. I am really, really tired," and he also said he'd been turned off by the increasing level of violence in films. "The world is too violent right now. It's a dilemma — I love fighting. I like action. but I don't like violence." At the Cannes press conference Chan said that, 'he wanted to show cinema-goers he could act as good as he can fight.' I hope he makes more films, though with more acting than action, and comes close to becoming the 'Clint Eastwood' of Asia.

Chan is a good guy, he has an infectious smile and a charming personality. I remember how as a kid, I used to love his films more than the Arnold's of the planet. Maybe because he stays away from blood and gore and can make one laugh even during an action sequence ... this article tells me that my opinion of him is not incorrect. Thank you :)

Jackie is a true global star and somebody I admire a lot for constantly reinventing himself. From movies meant for China today he is a global star and continues to be loved by millions.. thanks

Very well written and informative...Loved the way you ended it, about him coming close to becoming the Eastwood of Asia. :)

You know, you have touched my pulse.

Jackie chan been my favorite hero since childhood, I feel so much for the actor who told us that actions are not as puny as it seems onscreen, b ut it can hurt a lot too and toughest guys don't shy from showing the hurt or emotions. Kudos to Jackie and yes, I loved your blog!

An eye-opening write-up on mercurial Mr. Chan. I remember me and my school chums bunking classes so that we can watch his awesome stunts in 70 mm.

@numerounity, Thanks for the appreciation. Keep visiting the blog.