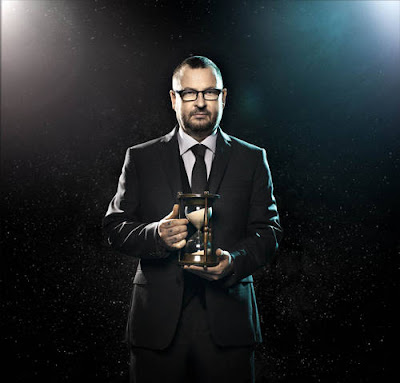 Lars Von Trier is widely regarded as the important Danish film-maker since Carl Theodor Dreyer, not only on account of the highly original quality of his cinematic oeuvre, but also because his role as an inspirational figure has made him a driving force in the renewal of Danish film. Von Trier's relation to the tradition of Danish film polemical and largely negative; his first feature films established a clear preference for English language film-making in an internationalized art-cinema vein involving a visual style cinema influenced by, among others, Andrei Tarkovsky.

Element of Crime, Epidemic and Europa were framed by Von Trier as a trilogy exploring a Europe that, although strangely deterritorialized, somehow ends up being largely synonymous with Germany. The trilogy, claims Von Trier, pits nature against culture. Each of the three films develops a story centered around an 'inquiring humanist who leaves his home terrain,....... journeys out into nature' and ends up being destroyed by the very process in question. 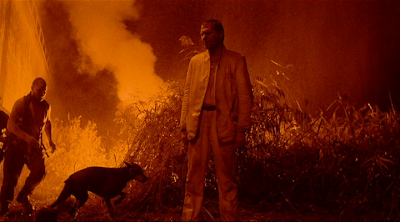 Von Trier's view that film can induce states resembling hypnotic trance is evident in the trilogy's insistence on a connection between narrative and hypnosis. The entire story of 'Element of Crime', Von Trier's attempt at a modern film noir, is framed as a narrative of serial murder related to Cairo psychiatrist by his hypnotized patient, the European policeman Fisher.

The low-budget, black-and-white meta-film Epidemic features von trier as both a sardonic irreverent film-maker and as a idealistic doctor. The film concludes with the film-maker and his co-writer, Niels Vorsel, presenting their project to an actual consultant from the Danish film institute, Claes Hansen.Part of their presentation involves hypnotizing a young woman with a intent of having her enter their imagined fictional universe. The group is suddenly smitten by plague symptoms -  the explanation, it would appear, lies in the woman's hypnotic imaginings. 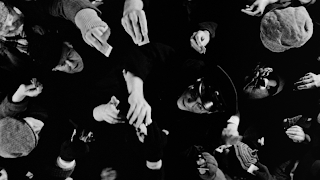 In Europa, a melodramatic love story involving a Nazi sympathizer, Katharina Hartmann, and a young American idealist of German extraction, Leo Kessler, Von Trier makes use of an intricate form of cinematic narration. More specifically, the disembodied voice of Max von Sydow hypnotically directs both the viewer and the main character through the unfolding narrative. Although these three films are different in many respects, they clearly manifest Von Trier's affinity with a German expressionist cinematic style which emphasizes long shots and elaborate camera movements through highly contrived and carefully constructed scenographic spaces.

A key element in Von Trier's oeuvre is his self-image as provocateur, a stance expressed in the influential Dogme 95 project which Von Trier developed together with another young luminary of contemporary Danish cinema, Thomas Vinterberg. In brief, the four participant film-makers (Von Tier, Vintberg, Kragh-Jacobsen and Kristian Levring) agreed to submit to a vow of chastity involving strict rules designed to foster the essential elements of cinematic art that are particularly at risk in big-budget productions using cutting-edge technology. Thus, for example, 'shooting must be done on location', 'the sound must never be produced apart from the images or vice versa', 'the camera must be hand held' and 'optical work and filters are forbidden.' 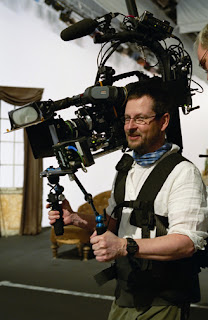 Dogme also expresses an interest in collective authorship in as much as the relevant directors submit to uniform rules and cannot be individually credited. Initially to have been supported by a special grant from the Danish ministry of culture, Dogme 95 was ultimately made possible, following considerable controversy, by support from the Danish Broadcasting Corporation. The first danish Dogme film, Vinterberg's Festen (The Celebration, 1998), was co-winner of the Special Jury Prize at Cannes and helped to consolidate a growing international interest in new Danish cinema. Dogme 95 has since become a transnational undertaking.

Von Trier's Idioterne (The Idiots) is the second of the Danish Dogme films; it explores what the director refers to as the 'distasteful idea of people who are not in fact retarded pretending to be.' Karen, an outsider who initially questions the propriety of pretending to be retarded, has a special place in the group. The film concludes with her playing the lunatic where the personal risks are greatest, that is, in front of her husband and other family members who have not seen her since the death of her 1-year old son.

She is accompanied by Susanne, who learns of her deep grief for the first time and movingly bears witness to Karen's new-found ability to achieve the authenticity that somehow accompanies the project of idiotic pretense. Von Trier's claims his aim was to produce a cocktail consisting of 'self-centered idiocy on the part of the group's members, combined with intense sentimentality and emotionally charged scenes.' This insistence on sentimentality is linked to Von Trier's intentions in 'Breaking The Waves', whilst recalling his interest in reviving the much maligned and frequently adapted works by the maudlin popular writer, Morten Korch, as well as his remarkably successful attempt in 'Dancer In The Dark' to combine certain sentimental qualities with the highly stylized musical genre.

Referring Riget (The Kingdom) and Riget 2, Von Trier explains his repeated characterization of the David Lynch inspired hospital series as 'left-handed work': 'It is not the work of a fine hand, which is also a way of provoking yourself, if you are used to writing with your right hand.' Von Trier's oeuvre lends credence to the idea, which he himself clearly espouses, that creativity is linked not so much to limited freedom, as it is to precisely defined challenges and clearly articulated constraints. 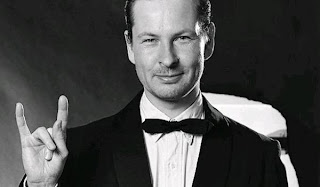 The erotic melodrama, Breaking The Waves was once again an attempt to provoke himself. Von Trier says, 'I establish problematic and take things to their logical conclusion, which involves asking whether a sacrifice could be sexual. We know about the sacrifices of saints, so why couldn't a sexual sacrifice be a saintly sacrifice?' The film centers around the relationship between Bess, a young and inexperienced local woman, and her husband Jan, who is one of a number of outsiders working on an off-shore oil rig. When Jan is paralyzed following an accident on the rig, Bess, having previously begged God for her husband's return, assumes that she is to blame. 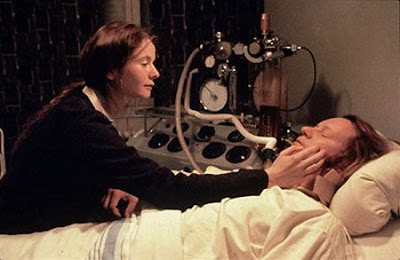 Bess becomes convinced that Jan's recovery depends on her willingness to sacrifice her sexually. And Jan does in fact emerge from a coma as Bess expires as a result of knife wounds inflicted by a sexual sadist. The film concludes with shots of enormous bells ringing in the heavens following Bess' secret burial at sea. The film, which won the Grand Jury Prize at Cannes, was praised for its remarkable acting and an effective visual style shaped by hand-held cameras and slowly evolving chapter images.


The Transformation of Danish Cinema

Von Trier has transformed the landscape of contemporary Danish film, repeatedly taking issue with the standard institutional arrangements and associated with film-making in the context of a small, state-supported industry. Vinterberg makes the point succinctly: "My collaboration with Lars Von Trier has taught that he is able to make Denmark big, without leaving Denmark. And this, for me, is the ultimate ideal. The idea is not to go international and become famous but to think oneself beyond Danish mentalities." Von Trier's vision and powerful presence have been a clear source of inspiration to other film-makers, particularly in recent years, but his work has also helped to reshape the very definition of Danish film.

Von Trier's projects are characteristically bold, passionate and generous attempt to break the hold of various conventional and stultifying set-ups, with the aim of fostering the conditions for genuine creative expression and dialogue.

A brilliant film maker.
But somehow I could never agree on the vows and rules in the Dogme 95, what about you?

@Vinay, Thanks for the comment. I am also a bit skeptical about the rules of Dogme 95.