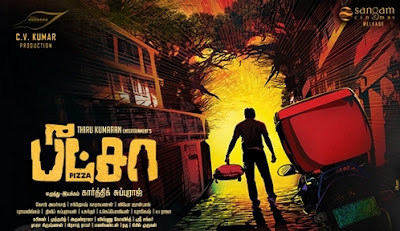 Thrillers, without a plagiarized plot, are a rare thing in Tamil movies. Also rare are the thrillers that makes you play the guessing game. In a season, where top-billed actors' movies (from Saguni to Maatran) are falling for the below-average category, here is a movie that keeps us entertained, without insulting our intelligence. Karthik Subburaj's feature-film debut "Pizza" creates dread and suspense in our minds, and is neatly packaged with a good lean cast, taut screenplay, deft camera work, and a terrific background score.

Karthik Subburaj has made numerous short films, which received wide appreciation in the Internet. Setting about to do a full-length movie is not a simple task, even for a short-film maker, but Karthik delivered the goods. Pizza has a simple story with an interesting screenplay. It urges viewers and critics alike, not to spoil the movie by giving the distinct structure of the plot.

Michael (Vijay Sethupathy) works as a pizza delivery boy and has a live-in relationship with his girlfriend Anu (Ramya Nambisan), who is a aspiring horror-novelist and an avid reader of ghost stories. There is no usual dose of sentiment here, by introducing us their families, because they both have grown up in a orphanage. Michael doesn't believe in the presence of paranormal and a bit afraid of it too. In the meantime, unexpected pregnancy of Anu forces Michael to marry her. Up to this point, the movie moves a bit slow takes some time to set up the characters.

The movie shifts to top-gear, when Michael is asked to do a home delivery to a posh, mysterious bungalow. Michael is stuck inside the house and encounters some paranormal creatures. The second-half unfolds in a different manner and keeps you guessing the various possibilities of a twist. Revealing more about the character and plot, might spoil the interest, so it's best leave it at this.

Vijay Sethupathy (who recently did the role of villain in 'Sundarapandian) has a great field day as Michael. A character in a horror movie needs to convey fear in a believable manner. Vijay's dread and the occasional outbursts of courage are perfect for such an character. Ramya Nambisan as Anu plays her part effectively, looks endearing as well as cunning.

Other important ingredients for a horror/thriller movie are cinematography and background score. Be it the romantic sequences, at the start, or the fearful haunting house sequence, cinematographer Gopi Amarnath frames it all in an efficient manner. Santosh Narayanan's music score seems to be an integral part of the movie. His background score is one of the high points of this splendid movie. Paul John's editing plays its part in increasing our anxiety.

Director Karthik Suburaj  has made a huge impression by producing a gripping story. He has really made us think that, it's going to be another psychological horror inspired from Hollywood, but has delivered an entirely different movie. The lean cast and its intentions are executed in a exalted manner. Even though there are some minor plot holes, Karthik doesn't give you the time to ponder on those things (at least when you are watching the movie) Producer C V Kumar (Who also brought "Attakathi") deserves huge credit for coming up with this quality product. Some might say, 'Pizza' is influenced by Hollywood horror classics like 'The Shinning' or 'The Sixth Sense.' If you consider 'haunted house' and the 'ghost-seeing experience' as a inspiration , then there are some hundreds of movies with this plot structure, even before the inception of these classics.

Pizza is progressive film-making at its best, and highly entertaining with a well thought-out plot. It's a movie experience that should be savored by watching it in a theater.

good work on the review.

Glad u watched it. I liked it too, but thought I had to wait too long for the twist

Hopefully this is the first review on a regional cinema in your blog [Pardon me if I’ve guessed it wrong]. Congrats pal. There is some irony, a kind of ignorance amidst cinema lovers in India. Most of the time we over look some of the original and genuine attempts made by Indian film makers, just with a common notion that Indian films are in general not of international standards. At the same time if ever a foreign film maker makes such a cinema, we pat on their back and hail their works as a cinematic excellence. I’ve a humble request for you, as your blog has attracted global following. Let them know about Indian cinema too, through your articles. Hope you’ll agree with me that we’ve native film makers and performers aplenty who are worth mentioning. In the future I request you to give space to Indian works too. And this might be a gift on your part to Indian cinema, at this juncture, as Indian cinema is celebrating its centenary year. Cheers.

@Haricharan, Thanks for the comment. Yeah, takes its time to set the plot, but considering the below average star-value Tamil movies, 'Pizza' is far better.

Thanks for the appreciation, Joe anna. I have reviewed Maatran recently, but yeah not a lot of posts about Indian movies. Will definitely start to write about the great under-rated Indian movies and movie personalities.

Dear arun
very sorry for the delay in posting this comment. watched and ENJOYED this movie in the recently concluded 10th chennai intl film festival where this movie bagged the 3rd prize for the tamil movie section. kudos to karthik subbaraj's unit.

//entertaining movie without insulting the intelligence of the audience//
as far as i am concerned (only me) entertaining movie but i guessed in the middle itself that it would have been all arranged by the thes../ proj...of work of ........ ( not revealing for the benefit of other non watchers )
the main baseless logic is that " if that swapna bungalow / haunted house is just .......... of the hero then how come pizza shop took order and delivering it in REALITY" ??! the basic plot itself lacks logic. for me that was a "BIG LOGICAL mistake". but otherwise overall a very good attempt by a debut director. thanks. just want share my thought ( i may be wrong also / i could not figure out it yet ) with like minded cine lover.
thanks again
anbudan
sundar g rasanai chennai

@rasanai, Thanks for the comment. You are right about the logical question. At the first time around i enjoyed the movie, but repeated viewings makes us ask many questions. Anyway hats off to director Karthik for at least making a movie to think -- which is very rare thing in Indian cinema