Hitchcock - Not a Solid Tribute but Worth a Watch 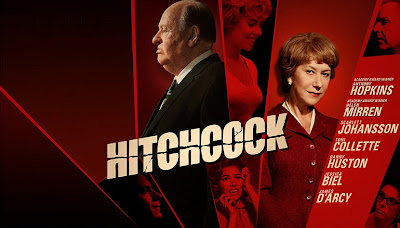 Sacha Gervasi's "Hitchcock" (2012) might be a misleading title for this film. It could be named as 'Hitchcock - In the Making of Psycho', but that might have lead to confusion and look like an DVD supplemental feature or a documentary. Nevertheless the movie reveals a love story few of us know: the complicated and variable relationship of the great director and his wife, Alma Reville. It is a film buff's delight -- a dark yet glittery corner of Hollywood history given a “Hollywood” treatment.

The story takes place in the year 1959 where Hitchcock (Anthony Hopkins) was hot off the success of "North by Northwest." An interviewer asks "You're the most famous director in the history of this medium, but you're 60 years old, shouldn't you just quit while you're ahead?" But, he has no intentions about retiring, so does the studio heads. Hitch was looking for something fresh and different. And thus he comes upon Robert Bloch's "Psycho", a novel inspired by the true-life story of a Wisconsin serial killer. But even he -- the most famous director -- has trouble convincing the head of Paramount Pictures (Barney Balaban) to distribute the film until he offers to shoulder the $800,000 budget himself.

As he struggles to raise the money for Psycho he spars with studio executives and censors; suspects his long-suffering wife, Alma Reville (Helen Mirren), of an affair with an writer Whitfield Cook (Danny Huston); and worries that he's going to lose. Along the way, we also get an perspective of how Psycho was made, including a behind-the-scenes perspective of the shower scene. 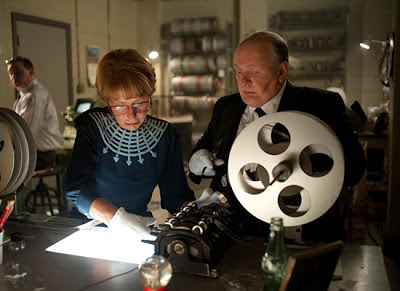 In the movie, Hitchcock is often visited by the spirit of Ed Gein (Michael Wincott), the killer who may have served as inspiration for novel, Psycho. The Ed Gein parts seems like pretentious filler, and detracts more than it adds to our understanding of genius. Most of the scenes repeats the same point that Hitchcock doesn’t understand women and would be lost without Alma. Also we don’t get a lot of looks at the actual production, mostly just Hitchcock worrying about it. First-time director Sacha Gervasi makes the most of the wit and the creativity that veteran actors Anthony Hopkins and Helen Mirren bring to their roles. His screenplay with McLaughlin suffers from the lack of a consistent tone. But at the same time it's a wise choice to give Mirren, a center stage in the circus of his near-nervous breakdown.

The writing part somehow doesn't allow Hopkins to shower us with a great performance, however he has enormous fun with playing Hitchcock and draws out words in the director’s famous delivery. One of the great moments occurs when Hopkins stands in the lobby (in the premiere of Psycho) and like an orchestra conductor waves his arms in sync with the music that is raising the dread of the audience as they respond to the horrific shower sequence where Janet Leigh's character meets her grim death. Mirren as Alma, first feels like a common character but grows as the picture goes on, and by the end, when she steps in to work uncredited as an editor whose shrewdness saves “Psycho” at the last minute, she stands for all the anonymous women in the history of art who made significant but unacknowledged contributions to their husband's creations. Scarlett Johansson competes to show Leigh as a thoughtful professional aware of the interpersonal pit-falls set by her director for his leading ladies. James D’Arcy as Perkins is very perfect. 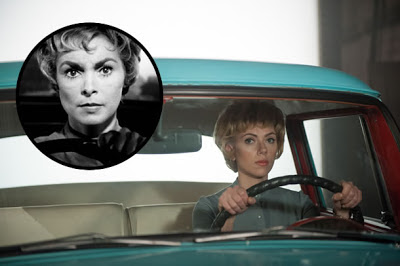 The scenes with the censor boards that threatens to keep the film out of theaters entirely for violating Hollywood’s production code is a neat illustration of how movies have changed. The more important thing to learn form that is  how a movie-maker could work around the censor and create the scariest scene ever put on film without once showing human flesh being damaged. For fans of Hitchcock this movie is a mandatory one to watch, even though we could have used a little something more.
"Hitchcock" has modest ambitions but is a fun to watch and its assessment of the woman who never got the credit she deserved is well done.
Trailer
Hitchcock - IMDb

It's been lying in my recent collection for some time now. Will watch soon and get back. Meanwhile,do check out "Promised Land".