Mud -- A Rich Coming-of-age Tale and an Atmospheric Thriller 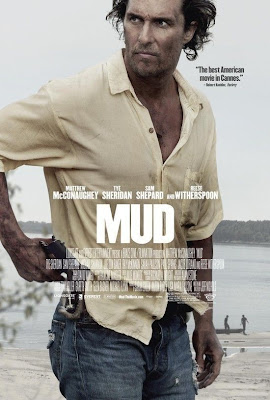 Director Jeff Nichols had an art-house hit in 2011 with the movie "Take Shelter", which is about a family man, who was plagued with dreams that he took for premonitions of an impending apocalypse. His new film "Mud" (2012) has decidedly different stakes, but has all the ingredients of a slow-burn, emotional masterpiece. The characters in "Mud" pay homage to characters popularized in Mark Twain's best works ("Huckleberry Finn" and "Tom Sawyer").

In the last couple of years, American indie films have developed a appetite for the stories of the working-class South (southern United States). "Mud" alongside "Paperboy" and Oscar nominee "Beasts of Southern Wild" is another offering to satisfy those cravings. The time period of the movie is not transpired clearly. It is set in ramshackle houseboats where the film's characters don't use cell phones or computers. What important, here, is the location not the era, since a large part of the film unfolds on a deserted island in the Mississippi River, which constitutes mindsets and influences actions. All said, "Mud" demands certain patience from the viewer, which is amply rewarded with various emotional payoffs. 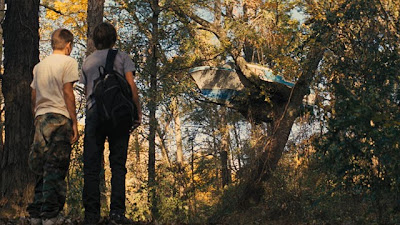 Ellis (Tye Sheridan) is a fourteen year old boy, living in a houseboat with his parents (Ray McKinnon and Sarah Paulson), who are headed for a divorce. Ellis hangs out with his foul-mouthed, funny best pal Neckbone (Jacob Lofland). Neck is raised by his uncle Galen (Michael Shannon). On most days of the week, Ellis and neck go on exploring the mighty Mississipi River in a small motor boat. One day, they come upon a boat lodged high in a tree (a victim of hurricane or flood) in a small island. The boys use the boat as a tree-house, only to find out that a strange, lone inhabitant is residing in the boat. His name is Mud (Matthew McConaughey).

Mud looks like a rugged tramp but introduces himself in a non-threatening manner to the boys. Mud tells the boys that, he is hiding out on that island to meet up with the "love of his life," Juniper (Reese Witherspoon). Ellis likes Mud's sense of romanticism and the idea of true love. He is so willing to help out Mud, especially after discovering the reason for the Mud's hideout. Tom Blankesnhip (Sam Shepard), Ellis' mysterious neighbor and the man who raised Mud has a far different assessment of Juniper. The whole situation forces Ellis and Neckbone into learning unwelcome lessons about loyalty, disillusionment and love. 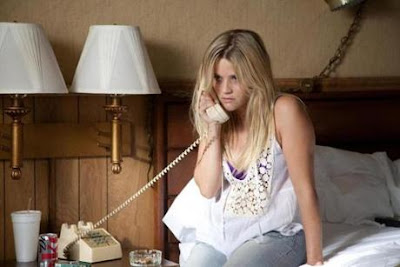 The movie belongs to Matthew McConaughey, who has been on an extraordinary run of late, turning impressively versatile roles in "Lincoln Lawyer", "Bernie", "Magic Mike" and "Killer Joe." He has transformed himself from being a rom-com sellout to a real, hot-blooded actor. He brings a heartfelt anxiety to the character of Mud. He delicately balances Mud's romantic yearning and survival instinct -- an instinct which enlists the naive kids as an accomplice. Tye Sheridan's Ellis is the film's emotional core. Part of Ellis' idolatry to Mud comes from the strained relations in his own household. He is seeing the break-up of his parents, people who are supposed to love each other. So, Ellis tries to believe in his belief of true love by helping Mud and Juniper run off together. Jacob as Neckbone is highly credible as the 14-year old adventure loving boy. Sam Shepard turns in another notable performance, while, Reese Witherspoon gives an astounding performance as a woman who can’t help being who she is, regardless of the pain that may cause.

Director Jeff Nichols and cinematographer Adam Stone convey the sense of place rendering the beautiful woods and river banks with a potent sense of tactility. They are also adept at portraying the mundane locations (a grocery store, a seedy motel, Ellis’s family’s houseboat) and at capturing the monotony and pleasure of work. Nichols, who has also written the script grapples it with ideals of American manhood and establishes the region’s civilization. All the characters we come across in this movie are both indelible and three dimensional. As a director, he has shaped the actors, allowing very naturalistic performances. The director doesn't have a superior sense of judgment -- a 'hard to find' sense of balance which makes all the difference. 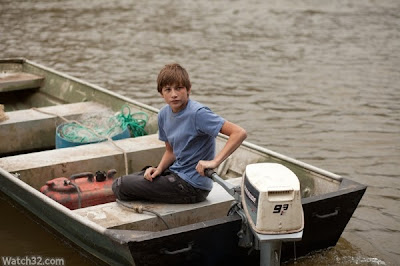 "Mud" is criticized for its overlong running time (130 minutes) and slow pace. But, I felt that the movie paces with a methodical sense of purpose, moving us slowly through the plot developments, which are eventually paid off with various emotional scenes. "I don't traffic in the truth too often, but I did love her" -- the words doesn't make sense in a standalone paragraph, but the lines are surely a heartbreaker coming out of Matthew McConaughey's mouth (towards the end). The one thing that contradicts the movie's natural currents is the generic, Hollywood style climax (which can be over-looked).

From an unconventional perspective, through the eyes of an innocent teenager, the film explores the belief in love. It is also a sensitive portrayal of United States' Southern culture. In short, "Mud" is a rich and emotional experience that impacts us with a sense of wonder, discovery and mystery.

Arun. Just saw this film yesterday. Reminds me of the locations on the Beasts of the Southern Wild.

Also to be mentioned is the three male-female relationship.

I guess finally none came together.

@ Ravi, Thanks for the comment. Yeah the locations are akin to "Beasts" movie. I also felt that male-female relationships in this movie was not explored to full extent. But, that's one of the traits of director Jeff Nichols. In his three films, he was mostly interested in examining masculinity rather than the relationships.

@ comboupdates.com, Thanks for the comment. "Mud" is a bit main-stream than the artistic "BofSW."

Mark Twain was my fav as a kid, will surely catch this movie.

This is undoubtedly the best English film i have watched so far this year.I wish we get to see many more indie gems like this

@ Athenas Take, Thanks for the comment. There are lot of undercurrents of Twain's story.

@Haricharan, Thanks for the comment. Yeah, you are right. This one Indie gem is a lot better than the group of Hollywood summer block-busters.

Have been meaning to watch this movie. I missed watching it at the cinema. I like both Mathew and Reese..so will definitely see it.