Sympathy for Lady Vengeance -- A Ride into the Heart of Revenge 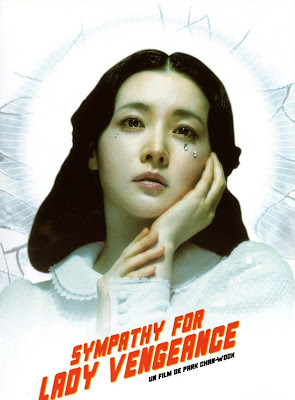 South Korean director Park Chan-wook is known for establishing new boundaries of spiritual devastation and narrative complexity. He has an unusual flair for mixing stylish visuals, surreal fantasy and shocking violence. His oeuvre will divide critics and viewers into two camps, those who dismiss it as self-indulgent violent trash and those who see it as art of the most personal kind. "Sympathy for Lady Vengeance" (2005) -- Park's ending chapter in "Vengeance Trilogy" -- has similarly generated the debate and has polarized the viewers. "Lady Vengeance" is Park's most sullen film, which is narratively erratic, thematically damned and viscerally traumatic.

The movie is told in a series of flashbacks, which skips randomly through time. If you have patience, you will catch up with the story before the darker second-half. Geum-ja (Lee Young-ae) is released from the prison after serving more than 13 years for the murder of a boy. She has confessed to the kidnapping and murder of the boy, but through selfless good deeds, she was rehabilitated. As Geum-ja emerges from the prison walls and stands in the snow, it seems impossible that she could be anything other than an angel. Very soon, we are baffled to know that her angelic image is a cautiously constructed act to exact revenge upon the man responsible for her imprisonment, Mr Baek ("Oldboy" and "I Saw the Devil" fame Choi Min-Sik). 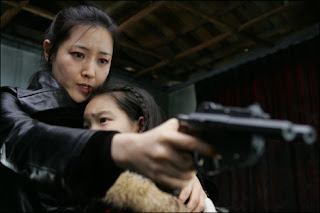 The prison life didn't just steal Geum-ja's life, but she was forced to give up her baby daughter for adoption to Australian parents. Geum-ja stays with a ex-con (Seo Yeong-ju) and was helped by a bank robber (Kim Bu-seon), whose husband helps her construct an ornate double-barreled gun. She also bumps into grumpy cop (Nam Il-woo), who doesn't believe her, and is skeptical about her stony demeanor. Geum-ja's target comes into sight in the first hour, whose crimes are gradually revealed and gradually swims to a darker climax (some might call 'violent excess').

Park Chan-wook has written the script along with Jeong, whose ideas owe more to Asian manga like "Oldboy." The prison experiences are laced with black humor and overall the script has very un-Hollywood lack of redemption, guilt or compassion. Park's films usually have stunning visuals and "Lady Vengeance" has got its share of memorable images: street lights that slowly black out, turning a snowy street into dark alley; common people holding different weaponry while dressing up in plastic raincoats; metal sculptures of women holding a man's severed head. The classical scores, filled with strings and pianos, haunt us along with the imagery.

Lee Young is poignant as well as terrifying in the role of Geum-ja. She fares excellent through bundle of conflicting urges -- righteousness, maternalism, fear, doubt and alliance -- that is fearsomely convincing. Legendary South Korean actor Min-sik as Baek, once again carves out a portrait of obstinate evil. He is chillingly creepy in his limited screen-time. Among the supporting actors Il-woo Nam stands out as the wry detective.

In a regular Hollywood movie, killing a bad guy is an end to all evils, but in Park's realm, the violence is so toxifying and contagious that spreads from perpetrator to victim to survivor. The climax may seem to be dragged out and too abrupt to convince, but its psychological intensity questions the phrase, "the end justifies the means." Though there is lot of gut-wrenching violence, we are denied the primal satisfaction in righteous bloodshed like David Cronenberg's "History of Violence."


"Sympathy for Lady Vengeance" might test your patience a bit, but it raises meaty questions about vigilantism and is quite brilliantly plotted as "Oldboy." It is simply a nerve-wracking modern crime thriller.

her good-girl image is a carefully calculated act to exact retribution upon the man responsible for her imprisonment, Mr. Baek - See more at: http://www.emanuellevy.com/review/lady-vengeance-chinjeolhan-geumjassi-4/#sthash.sheKhCZy.dpuf
at August 02, 2013
Email ThisBlogThis!Share to TwitterShare to FacebookShare to Pinterest
Labels: Korean Cinema, Thriller

nice review. Not a real fan of violence, let alone nerve-wracking violence, but the way you put it, seems like it must be a good watch.
will try to watch it asap :)

@ Jigar doshi, Thanks for the comment. Many of the violent scenes in this movie is kept off-screen, even though we are intimated psychologically.