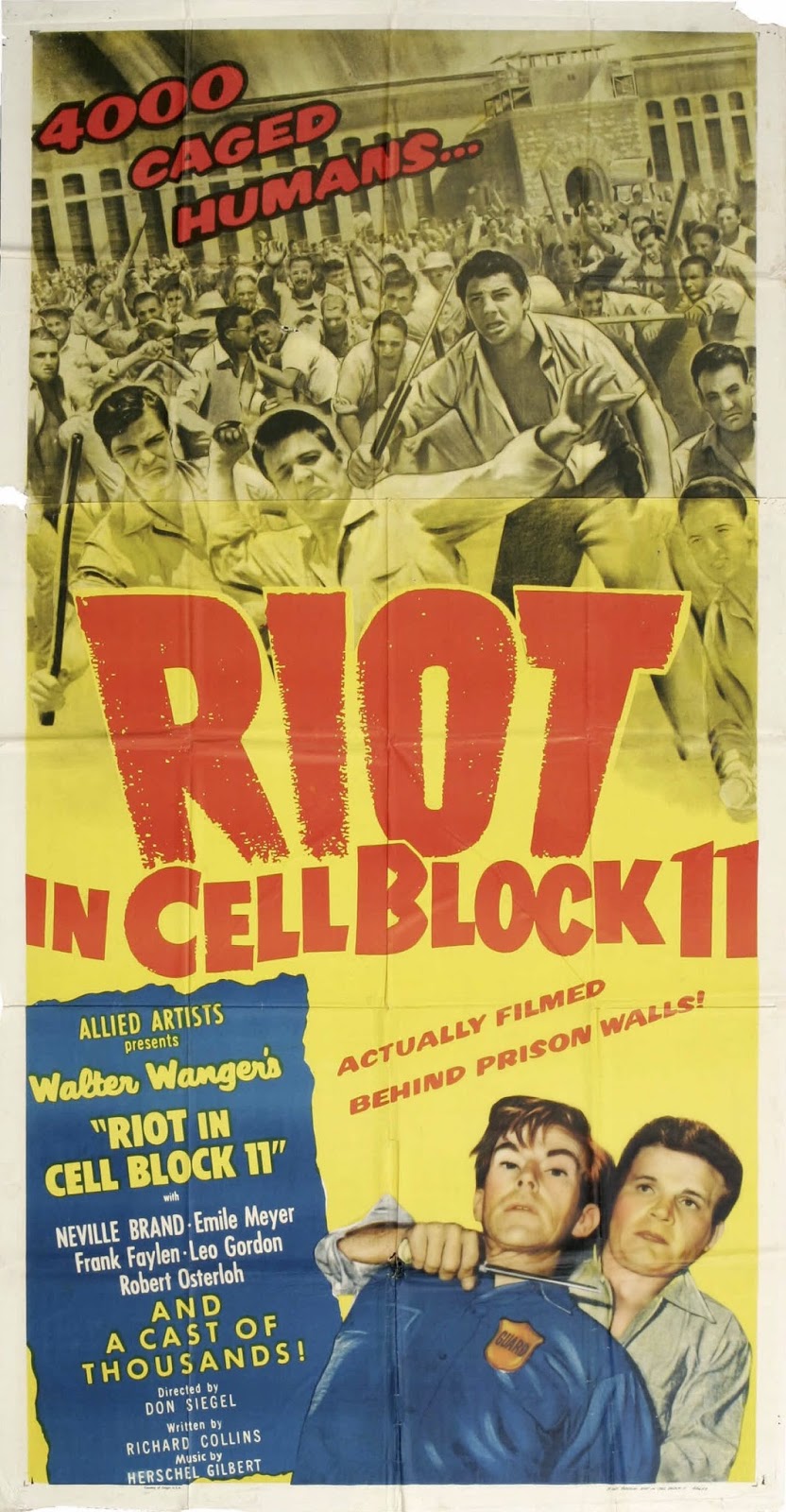 It is often said that a country’s social history can be fully apprehended by observing its prisons than watching over its other well-established institutions. If you think that this statement contains an iota of truth then America is a nation with an enormous societal problem. If you type in a simple question of ‘How many people are in jail in US?’ in Google, the answer would be that ‘716 people per 10,000 of the US population’ (as per Oct.2013 stats). US, which contains 5 percent of world’s population has 25 percent of world’s prisoners. Numbers of people behind bars in some of US states are higher than the prison populations of oppressive nations like Egypt, Saudi Arabia, or Mexico. These astounding stats become disturbing when it is proven that increased prison rates don’t help much to bring down the crime rates.

Since the 1980’s, incarcerated citizens in America’s thriving prison-industrial complex have more than quadrupled. But, before this mass incarceration problem, American Penitentiaries confronted bloody prison riots, which sometimes turned into revolutionary upheavals. Although the Attica Correctional Facility uprising (situated in New York) demonstrated the inhumane conditions faced by inmates (it ended horrifically with the death of 10 hostages & 29 inmates), the widespread prison struggles began in the early 1950’s. Most of these struggles were apolitical and the demands were perennial ones like better food & better treatment. At least fifty major riots is said to have happened between 1950 and 1953. These riots were all mostly spontaneous uprising. The iron-handed approach by the prison & state administration only spawned more radical ideas inside the prison walls. 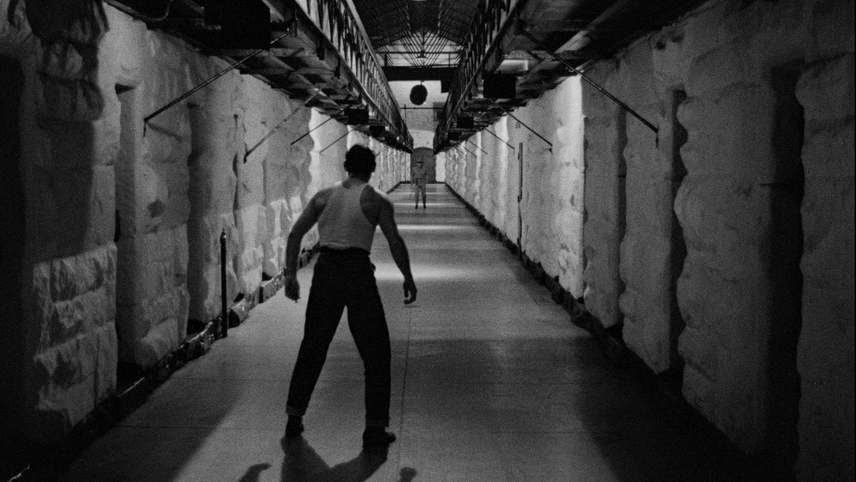 Director Don Siegel’s (known for explosive action sequences & tight narration) earliest directorial effort “Riot in Cell Block 11” (1954) fictionally recreates one of those riots, happened six decades earlier. Since the American prison system has gotten worse over the years, the film’s message still remains timely and relevant. This was also the film which brought up a thematic template for Don Siegel, who chiseled his way up to make widely acclaimed works like “Dirty Harry”, “The Shootist” etc. “Riot in Cell Block 11” was produced by ‘Allied Artists Pictures’ only as a ‘B-movie’, but over the years it has gained the status of a cult classic (even included into Criterion Collection). The movie was shot on California’s Folsom Prison (used many of actual inmate population as extras), and opens like a docu-drama with newsreel footage of actual prison riots.

The ‘cell block 11’ represents the solitary wing of the large state prison. The inmates of the wing are angered by violent security protocol, harsh living conditions. Most of all they hate the fact that there is no chance for rehabilitation, since no work is given to them and they aren’t allowed to learn new trade. The inmates sit in their cells idly, waiting for the time to pass. It is argued that this rudderless motion inside the prison walls only increases recidivism. Recidivism, known as habitual relapse into crime, is one of the biggest problems of US prison system (even now). The inmates of cell block 11 also doesn’t like the way the ‘nuts’ (used to describe sex offenders, dangerous delinquents etc) are not segregated from low risk offenders. 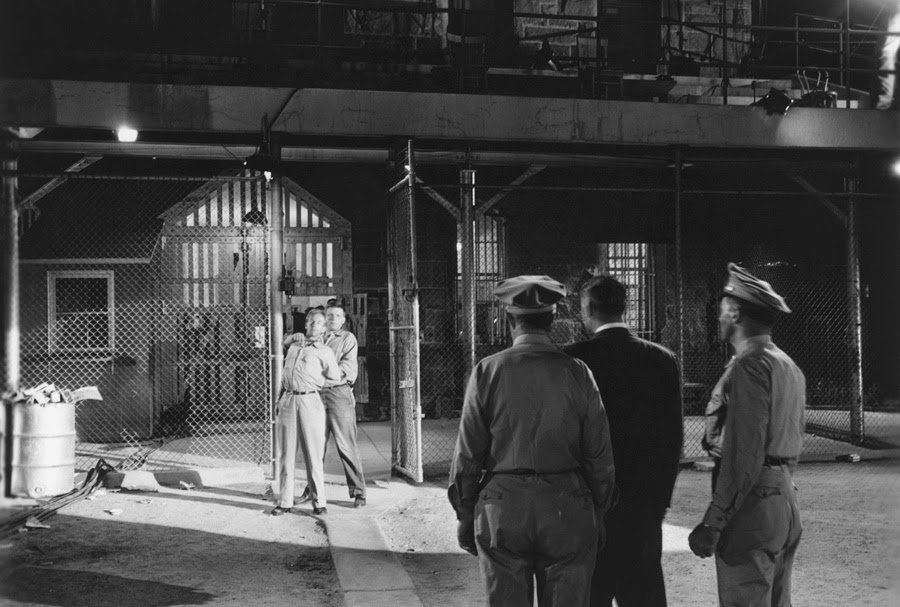 The situation reaches a boiling point, when square-jawed leader of block 11, James Dunn (Neville Brand) and his compatriots overpower the four guards. Dunn and his second-in-command ‘Crazy’ Mike Carnie (Leo Gordon) free all the inmates and secure the command of the block. Mike is itching to knife the guards, but Dunn doesn’t want to play that way, since he had started the riot for a reason. He seeks the help of gentle ex-military man called as ‘The Colonel’ (Robert Osterloh) to clearly draft their demands. Colonel rejects the offer initially since he is soon up for parole, but in order to curb Crazy Mike’s fierce tactics, Colonel accepts the offer. Meanwhile, Dunn demands for a press conference and to them he intones on the intolerable living conditions inside prison. 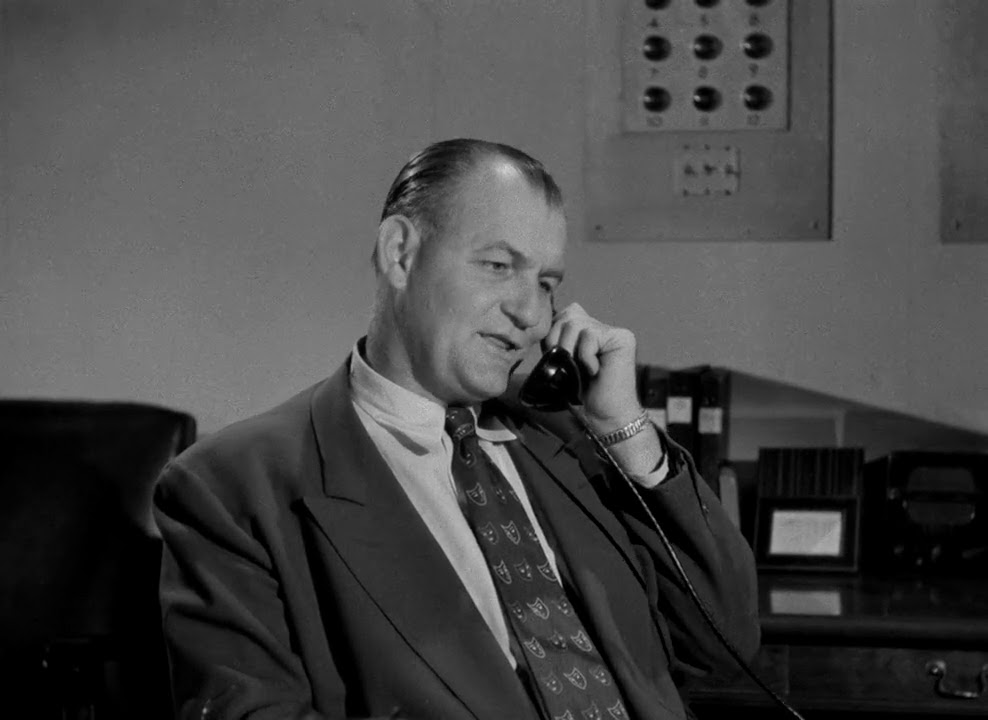 Warden Reynolds (Emile Meyer) refers to the media about Dunn and Mike’s mental health, but partly sympathizes with the motivations behind the riot. Later, we learn that many of the prisoners’ demands have been proposed earlier by warden to the state governor for years. Commissioner Haskell (Frank Faylen), who arrives as governor’s emissary is a much less decent guy than the warden. He hates the proposition of giving into inmates’ demand because he believes that it might set a precedent for future prison riots. Haskell’s words become true as inmates of the other blocks also start a riot at the breakfast hall. Five other guards are caught and sent into ‘cell block 11’ (making the hostage total to 9). Dunn asks for governor’s sign to immediately approve their demands and a promise that there will be no charges against them. 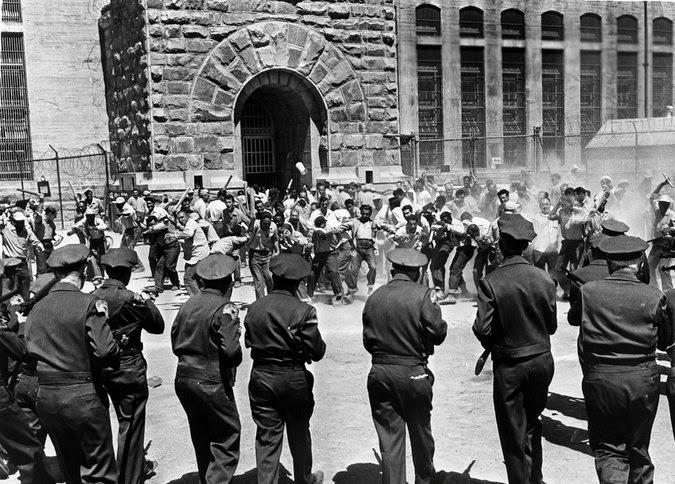 Despite being known as a ‘b-movie’ dealing with a vital social issue, Don Siegel doesn’t resort to preachy messages or heavy-handed melodrama, which was widely present in the movies of that era. Of course, Siegel’s primary goal is entertainment, but that didn’t stop him from taking a grittier & layered approach. Although the director was famous for his hands-on action sequences, here he directs it as an ensemble piece. He frames much of the action in long shots and despite the removed perspective, he was able lend empathy to both opposing factions. Some of the sequences in ‘Cell Block 11’ has also reflected in Siegel’s other works. In one scene, when a large prison population breaks from dining hall, they happily ransack the canteen, tool-shed etc. Siegel observe these activities of wayward men, suddenly set free from an oppressive environment, in an intimate fashion, and later this became one of his recurring thematic subjects. 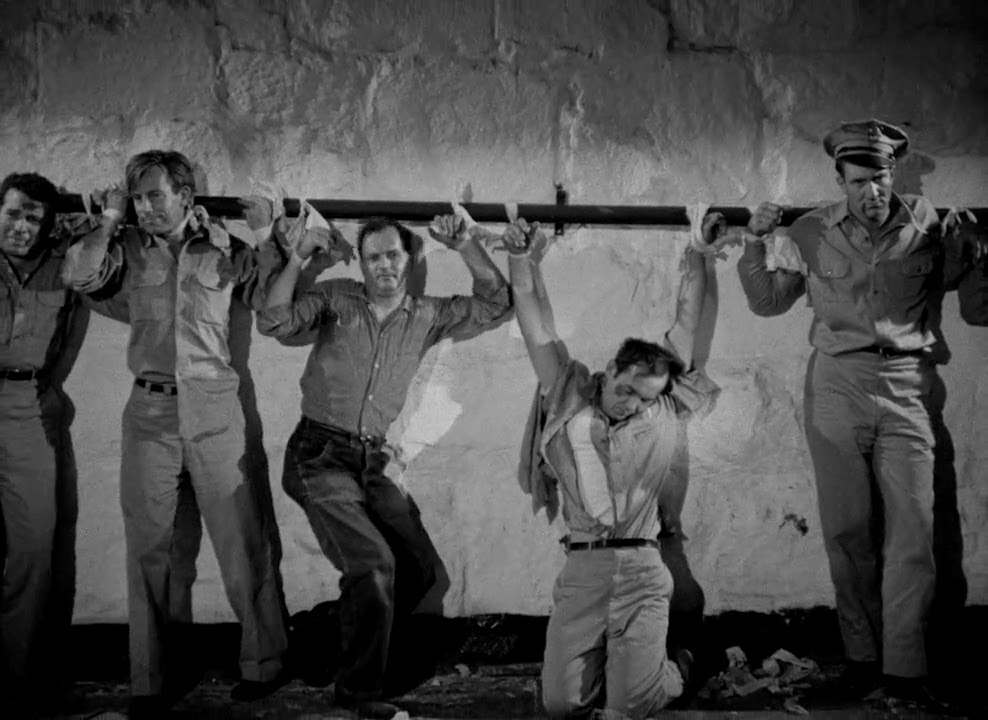 The script was written by Richard Collins, who was previously black-listed for four years for his involvement with the communist party in the 1930’s. The contemplative script served as a mirror to reflect society’s pressing problems. 'Cell Block 11’ casts out excessive grandstanding similar to the other famous ‘social problem’ flicks of the era  --“The Gentleman’s Agreement” (antisemitism), “Home of the Brave” (racism), “The Man with the Golden Arm” (drug addiction). Collins even at the breakneck speed of narrative never fails to acknowledge the inherent contradictions with in the ‘prison reform’ scenario. By not coloring many of the characters with shades of black & white, Collins effectively incorporates the valid themes associated with imprisonment. 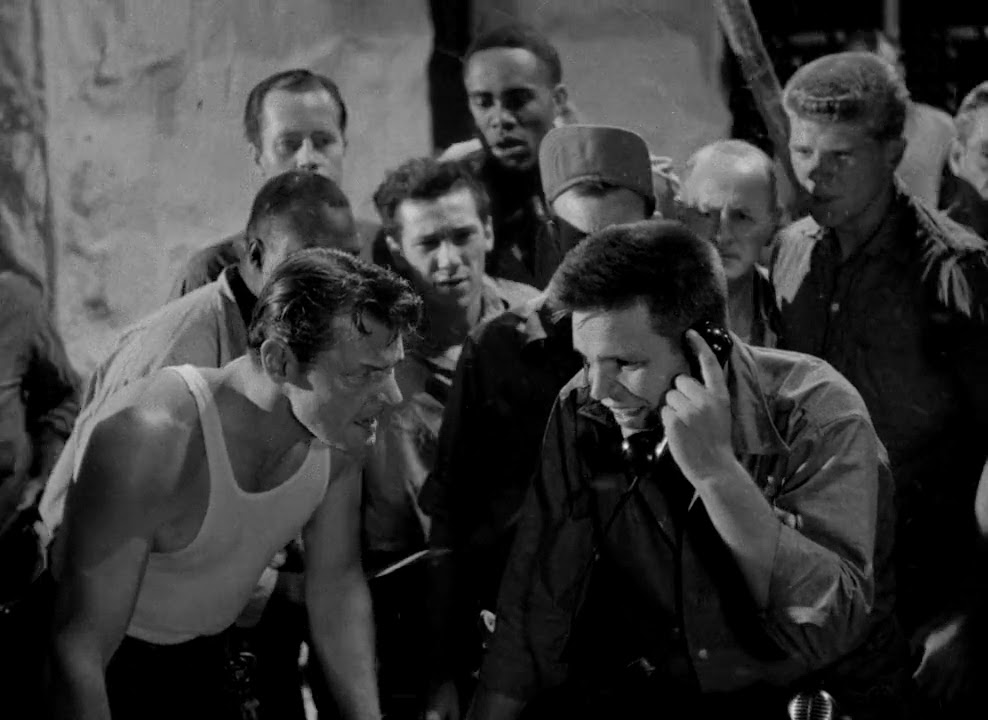 An imprisoned guard in one scene claims that he is never mistreated any of the inmates or played favorites, to which ‘The Colonel’ replies, “Yeah, you treat us all the same like cons. We all fight for our identity and you help to destroy that”. The guard immediately replies, ‘that’s not me; that’s the prison system’.   Such brimming conflicting viewpoints are populated throughout the film, and these balanced arguments make us to look at the economic & ethical issues involved in locking away these offenders.  Emile Meyer’s warden was one of the brilliantly etched characters in the film. Unlike the sadistic prison wardens portrayed in cinema, Reynolds looks at the problem with an appreciable depth. He knows that mistreatment of inmates would only lead to more resentment. His idea of better treatment of prisoners is approached with a sociopolitical angle rather than as a bland humanitarian approach.  There is a sort of resolution & imbued hope in the climax, but it is not in the vein of Hollywood ‘happy ending’.

“Riot in Cell Block 11” (80 minutes) is an effective indictment of the dehumanizing effects of American prison system. No answers seem to have been found for the lacerating questions raised by this six-decade old movie.

Enjoyed reading the movie review. Its always a pleasure to watch a realistic well directed movie.
Your blog is a very focused blog. Would like to invite you to join the group Blogger India on LinkedIn.