The Company of Wolves [1984] – A Dazzling & Obscure Horror/Fantasy 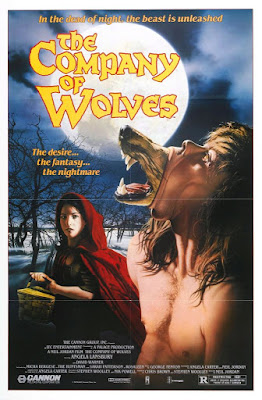 Fairy tales, though considered as moral stories for children, withholds vital layers of cultural and historical consciousness. The role of women in these tales mostly falls under the conventions of damsel in distress, evil witch, and a beautiful object for the princely hero. Eminent British novelist & short story writer Angela Carter reworked the fairy tales by deconstructing gender identities and exposing its absurdities. Although Angela Carter’s Gothic reinventions is said to purport strong feminist intentions, she didn’t just distort fairy tales to include the voice of virtuous females. In fact, she didn’t focus on breaking free from the authorial male voice in fairy tales by simply creating cruel, apathetic male characters. Angela Carter just delved deep into the darkness and complexities of human behavior. Her revised tales transformed the conventional roles of male and female archetypes and also transcended the textual boundaries through fired up erotic themes. Apart from Angela Carter, Neil Gaiman is one of my favorite writers, who can superbly revive monotonous fairy tales. Mr. Gaiman praises Carter’s 1979 short-fiction collection The Bloody Chamber and cheers Carter’s interpretation on ‘Little Red Riding Hood’ as his most favorite fairy tale character.

The Company of Wolves – the incendiary reworking of Perrault’s Red Riding Hood – is one of the brilliant stories in The Bloody Chamber. The story was adapted into a movie by Irish film-maker Neil Jordan under the same name in 1984. The script was co-written by Angela Carter herself and the film still remains as one of the strange and fascinating work in the werewolf sub-genre. Director Neil Jordan has a penchant for choosing fantasy/horror stories and he loves to create visual language that mixes elements of surrealism and magical realism. He made his directorial debut in 1982 with a drama about an Irish saxophonist. After the making of The Company of Wolves, Neil Jordan opted to do fantasy stories like High Spirits (1988), Interview with the Vampire (1994), Ondine (2009), and Byzantium (2012). He has also directed some incredible drama films including Mona Lisa, The Crying Game, The Butcher Boy, and Breakfast on Pluto. Neil Jordan achieved mainstream success and international fame only after The Crying Game (1992). The Company Wolves, however, is one of his minor masterpieces, which early announced the arrival of major film-making talent from UK. 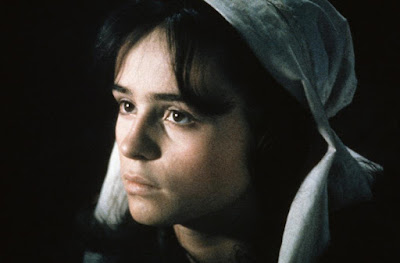 The film begins in the present (1980s) in a country estate, where the returning middle-aged couples are greeted by their elder daughter. However, the younger one Rosaleen (Sarah Patterson), on cusp of adulthood, lays asleep on her bedroom, oblivious to her sister’s holler. Soon, we enter into the girl’s dream state, where the older sister is running through the dark woods, first chased by magnified toys in Rosaleen’s room: giant dolls, teddy bear, etc. The older sister in the dream is eventually surrounded & devoured by wolves. A little smile escapes from sleeping Rosaleen’s lips. She is pleased about finishing off her sister in the dreamy realm. Gradually, the dream space elaborates and we get a look at Rosaleen and her parents living in a tiny village. The magical forest in Rosaleen’s dream is darker and confirms to the standards of storybook imagery. The dreamy tale is also set in the 17th or 18th century with the elderly villagers’ advising their younger ones to ‘never stray from the path’. Rosaleen often visits her grandmother, habituating in the secluded part of woods. The Grandmother (Angela Lansbury) treats the young girl with assortment of grisly stories, often involving werewolves. Although the dream space comes off as the central part of narrative, it often digresses into grandmother’s stories. These creepy stories create uneasiness in Rosaleen as she is on the verge of embracing her adolescence. 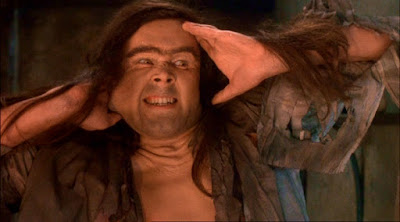 The werewolves in grandma’s tales are repeatedly represented as masculine predators, intent on devouring young girls, in both sexual and literal ways. The stories within the story serves dual purpose of strengthening the belief in Rosaleen that masculinity equals to animalism and also to instill the usual sort of fear on the girl, who may otherwise contemplate on her sexual desires or feelings. Angela Carter’s script adds complex layers to the fairy-tale archetypes, which never threatens to become a spiteful fantasy on masculinity. Rosaleen’s mother offers a fitting counterpoint to grandma’s creepy tales, “If there’s a beast in men it meets in match in women too”. And so, in Angela Carter’s story the femininity neither desires for the surrender of masculinity nor surrenders to the bestiality in men. This interpretation just denies confining women under victim-hood label. The script rather celebrates Rosaleen’s awareness on the strength of her burgeoning sexuality. Horror fantasies often create victim-hood status for women. The women in such stories ought to be powerless in order to weave dramatic tension. In Company of Wolves, those conventional gender roles are subverted, highlighting the woman’s awareness about the power of sexuality. The women’s body isn’t portrayed as a powerless object, waiting to be reclaimed by predatory male for the sake of pleasure. And, staying true to the words of her mother, Rosaleen eventually meets her match in the beast inside the charming hunter. The ending blasts off the conventions of Gothic romance by bringing in a distinct female interpretation of the fairy-tale. 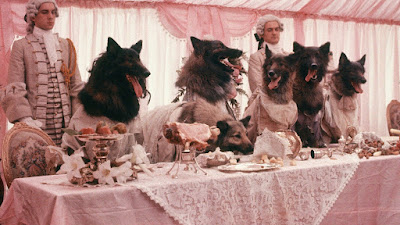 Director Jordan and writer Carter make the digressive stories to reflect upon the issues of class, marital politics, etc. Although these stories structurally follow the same trajectory of injustice transforming into unbridled rage, there are no fixed authorial voices to be found. The viewers are given space to not just absorb the bloody anger in the (grandma's) stories, but also interpret on the social situations which causes rage and injustice. All this may make one think that The Company of Wolves is heavy on the subtext and metaphors. But it definitely isn’t. The textual layers don’t affect the visual pleasures waiting to be derived from the twisted fantasies. During its release, the special effects and make-up were compared with seminal work in An American Werewolf in London (1981). But, Neil Jordan’s film didn’t have a lavish budget like John Landis’ werewolf movie. But within the limited budget, Neil Jordan & team has created highly effective effects. It features quite a few disquieting werewolf effects, especially when Stephen Rea’s young groom tears off the human face to reveal his beastly side. Neil Jordan’s aesthetic choice stays true to the dream-logic. The story-book style images are as elegantly realized as Jeac Cocteau’s Beauty and the Beast (1946). Jordan is interested in more in diffusing tones of ambiguity than go for clear-cut set-pieces. For example, the scene as Rosaleen climbs up a phallic structure (a giant tree) to find a bird’s nest where eggs hatch little ceramic statues of babies. Sarah Patterson doesn’t deliver a greatest performance in her debut feature, but her slightly wooden presence works well for the otherworldly setting of the story (she was only thirteen during the filming). Veteran actress Angela Lansbury is as usual does great in playing a grumpy character. The cameos and supporting turns includes English thespians like David Warmer, Stephen Rea, and Terrence Stamp.

The Company of Wolves (95 minutes) is a complex, beautiful, and ultimately rewarding reinterpretation on the werewolf myth. The horror effects may seem out-dated, but still you don’t often get to see such ambiguous, fantasy flicks.