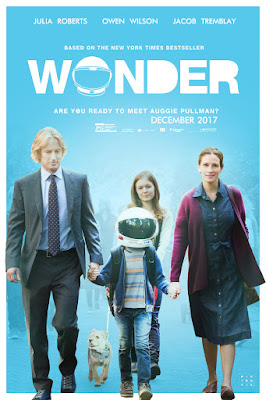 Stephen Chboksy’s Wonder (2017) is based on R.J.Palacio’s best-selling children’s novel of the same name. It tells the story of a tween boy named August Pullman (aka Auggie), who was born with facial deformity, a rare congenital condition that’s termed as ‘Treacher Collins Syndrome’. The film opens with Auggie’s sharp voice-over remarking, “I know I'm not an ordinary kid…ordinary kids don't make other ordinary kids run away screaming in playgrounds. I know ordinary kids don't get stared at wherever they go….I won't describe what I look like. Whatever you're thinking, it's probably worse.” Throughout this opening voice-over Auggie hides his face within astronaut’s helmet. A little later when the face is revealed, we, like the many strangers Auggie faces, stare at him which is involuntarily accompanied by feelings of pity. And the make-up design by Arjen Tuiten plus the little CGI tweaks perfectly brings alive Auggie’s face, aligning finely with readers’ imagination of the boy’s face. Soon, we get to look past the face, pulled-in by ‘Room’ fame Jacob Tremblay’s heart-warming performance.

RJ Palacio’s novel became a YA phenomenon. It’s an unapologetically sentimental work about the essential and powerful nature of kindness. Director Stephen Chboksy, who himself has written a successful YA novel and filmed it (Perks of Being A Wallflower), mostly understands how to get to the heart of the story without yielding to emotional falsity. When the film starts Auggie’s parents (Julia Roberts and Owen Wilson) decide to enroll him in fifth grade. Having been home-schooled his entire life, the boy must now to prepare himself for facing a larger audience – a setting that’s guaranteed to be cruel. “It's like leading a lamb to the slaughter,” says Auggie’s cool, friendly dad. But mom feels it is time for him to go into the world and try to fend for himself. The boy is also reluctant to give up the kid-sized NASA space helmet he uses to deflect stares in the street. Still, to struggle and win over the new setting of bullying and thoughtless behavior, Auggie has to take off without the comfort of the helmet. 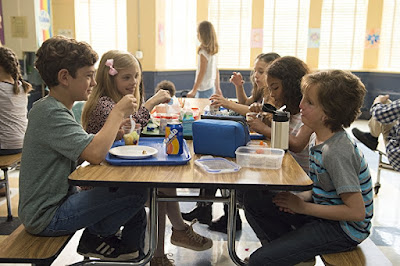 Wonder does contains couple of moments or more where it takes shortcuts to squeeze out emotions. But the larger part of narrative boasts a level-headed attitude and a big heart. With a running time close to two hours, Wonder might make viewers wonder about the humdrum of sticking to affluent ten year old’s perspective, even though he has an extraordinary heart. Thankfully, staying true to the novel’s tone, screenwriters Jack Thorne, Steve Conrad, and Chbosky weaves the story through the viewpoint of multiple characters, bringing to surface distinctly individualistic problems that are invisible when looked from the other side. This jumping narrative structure doesn’t work as perfectly as in the novel format. However, this approach makes ‘Wonder’ a whole-hearted family tale than just exhibiting the troubles and aspirations of Auggie.

Although Jacob Tremblay’s intuitive acting skills and 90 minute make-up application occupies a great place in the film’s marketing campaign, the other very interesting aspect of Wonder is Izabela Vidovic, who plays Olivia Pullman, 15 year old sister of Auggie. Olivia is the ‘normal’ kid, but she has also put up with feelings of being an invisible child. As she bitter-sweetly states, ‘family revolves around the son’. In a conventional narrative trajectory, Olivia would be acting out or gain grim sense of satisfaction by being nasty to Auggie. But here the caring, average teenager copes with life’s challenges in a genuine, organic manner. We think her decision to conceal Auggie’s existence from the boyfriend would lead to some dramatic confrontation later. What ensues is much more poignant and naturalistic. Izabela shows how a performance could remain equally arresting by just being nice and kind enough. Usually in the films pushed under ‘feel-good’ or ‘inspirational’ category, the secondary characters simply remain as a device or a caricature to help boost the central character. Interestingly, in Wonder, the omnipresent earnestness to understand others’ problems makes it a cut above those overtly sentimental works. 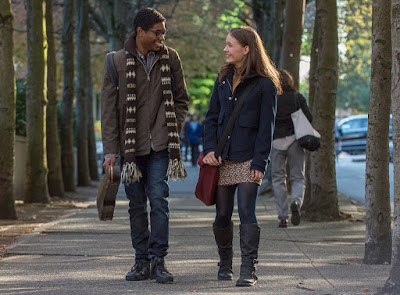 Not every plot point and character decision in Wonder is precisely calibrated to manipulate our emotions. The big touching moments happen in a more organic manner. Take Auggie’s reconciliation with his friend Jack Will (Noah Jupe) over a game of mine-craft or Auggie’s reaction to the death of their family’s beloved dog Daisy or Auggie’s first fight in the wilderness camp, those pivotal moments are handled in a understated and restrained manner. Olivia’s instantly great performance in the play or Auggie’s surprising award truly comes off as sure-fire sequences conceived to exploit viewers’ sentiments. And it exactly does that, although the good all-around performances didn’t keep me from shedding joyous tears in those emotionally manipulative scenarios. If there is a weakening factor in Wonder, then it must be its near-obsession in displaying that everything turned good for everyone. The very real problems like stress and money are largely absent in the narrative. Despite feeling for Auggie and his family, the very minimal exploration of the parents’ mental and financial strain and their unfaltering behavior simply keeps them as angelic creatures (irrespective of the dynamic presence of Julia Roberts and Owen Wilson). Stephen Chbosky’s uneven pacing plus his penchant for hitting few emotional notes too hard (for eg, the totally unnecessary scene featuring the grandma) also dissipates some of the narrative’s cuddly warmth. Nevertheless, the core story’s themes of compassion, tolerance, and kindness stay intact to ring out its commendable message.