A Genius Coder’s Vacuous Life and Hazardous Delusions of Grandeur 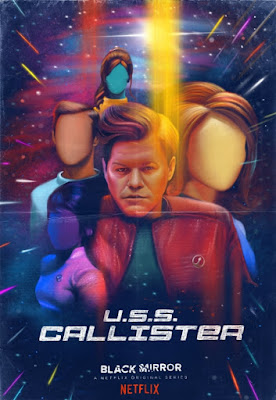 We’d all like to have our own virtual world to play God. Or at least be part of a subculture that’s so cool and unconventional compared to the allegedly mainstream ones. But what if it consequently leads to the onset of virtual purgatory and virulent fandom? What if the subculture is riddled with self-aggrandizing abusers who unmercifully quell any critique or when they try to be the obnoxious gate-keepers? The now famous 1st episode in the 4th season of sci-fi anthology TV series Black Mirror titled ‘USS Callister’ poses such eerily relevant questions. Scripted by William Bridges & Brooker, and directed by Toby Haynes, the USS Callister serves us a tributary piece to the original Star Trek series as well as a commentary on the show’s certain circumscribed views (sexism, racist stereotypes, white male entitlement, etc) plus its extremely devoted fandom. USS Callister is also one of the most darkly comical episodes of the series with a comparatively hopeful denouement.

What’s primarily interesting about this episode of Black Mirror is the way the roles are reversed. There are sentient lives existing within digital realm which are more ‘human’ than the humans of real world. Then there’s our frustrated and ridiculed genius programmer Robert Daly (Jesse Plemons), the guy for whom we initially feel nothing but sadness. Alas, his virtual identity turns out be that of a despicable tyrant. Instead of taking the usual path of ‘smart AI enslaving humanity’, USS Callister scrutinizes much relevant and relatable threat plaguing our digitized world: human beings exploiting modern technological tools to satisfy their dangerous impulses by turning possibly sentient digital beings into guinea pigs. It’s a scenario that alternately looks absurd and horrific, yet much refreshing than the usual dose of AI planning hostile takeover of humanity. 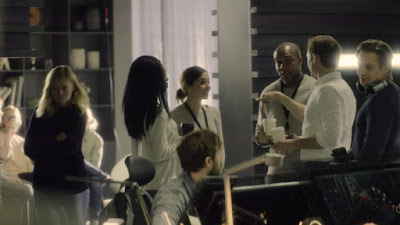 Robert Daly is viewed as the epitome of ‘toxic masculinity’. That would be unnecessarily pigeonholing a character that’s much more profound than what the aforementioned label suggests. Of course, the fourth season’s array of female protagonists are written in a way to challenge the traditional narrative plastered upon femininity and these women stand up to technology-aided tyranny to reclaim their power. But all the episodes in the season, including USS Callister, don’t apply the faux-feminist narrative that pits men vs women. Robert Daly is a grown man with a teenager’s wide-eyed awe for his favorite cosmos exploring TV show. He is also a gifted game designer/genius programmer behind a virtual-reality video game known as ‘Infinity’. Infinity is a hyper-realistic virtual reality platform and Daly has made a very detailed prototype of Infinity, inspired by his adoration for the sci-fi TV show. In fact, the episode opens with an old TV set's 4:3 aspect ratio with Daly playing Captain of the space fleet USS Callister, providing orders to his frightened multi-ethnic crew members. After saving the crew from the impending danger, he receives round of cheers and kisses from female crew members.

The scene abruptly cuts and we see Daly walking through a dim-lit corporate office. This ‘real’ Daly has hunched shoulders, receding hairline and looks a bit overweight. He is uncomfortable in the office atmosphere and avoids any sort of conflict. Although he is the co-founder and chief technical officer of the company, he is underappreciated by his coworkers and belittled by CEO Walton (Jimmi Simpson), the very common corporate bloodsucker. Interestingly, the crew members in the gaming realm of USS Callister, happens to bear resemblance to Daly’s coworkers with Walton taking on the role of inept, fawning subordinate of Captain Daly. It becomes clear that Daly tries to purge his personal trauma by being nasty to his creations inside the virtual world. However, the crew members of Daly’s personalized world aren’t just disposable codes which stop to exist once after the player terminates the game. The digital avatars of Daly’s coworkers are not only identical to the real ones, but also are sentient beings, gifted (or cursed) with consciousness and all physical sensation of real human beings. Robert Daly has made these replicas by collecting and preserving swabs of their DNA. This makes the imprisoned life inside USS Callister as real as the life in the outside world. 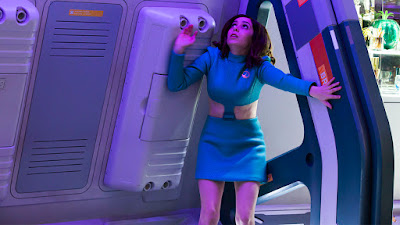 The real world Daly is enamored by the new employee Nanette Cole (Cristin Milotti), a young coder. She is genuinely interested in meeting Daly, sees him as an inspiration. However, when Daly sees Nanette talking to Walton and overhears a rude comment from another co-worker about him directed towards Nanette, he decides to digitally clone (and punish) his new co-worker too. Unbeknownst to Daly, he actually seals his fate by this act, since the digital Nanette is not interesting in being trapped for eternity in the game, wearing mini-skirts and kissing the 'successful' Captain Daly. By the time, digital Nanette originates inside USS Callister, the episode entirely shifts away from the perspective of Daly and extinguishes the little sympathy we initially had for him. Soon, we learn that Daly is the God of this infinite digital universe and keeps the conscious digital simulacrums, compliant enough to play their silly roles in the game. He often shows his absolute power over them by either transforming them into grotesque creatures or by inflicting unimaginable torture methods. Furthermore, Daly is obsessed with puritanical vision of the TV show by making these sentient clones without sexual organs and butt-holes (as digital Walton says, ‘he has taken away the basic pleasure of sitting on the toilet to push out the shit’). There’s nothing for these conscious simulacrums to alleviate boredom or the endless cycle of suffocation.

USS Callister predominantly examines the darker side of fan culture, where those forums toxic behavior is ironically opposite to the virtuous values taught by the adored piece of pop culture. Daly, despite designing his virtual world based on a series that focused on the betterment of the galaxy, upholds aggression and brutality. This is expressed in a comical manner in the scene digital Nanette murmurs, “Mini-skirted damsels. A little cold for that in space”, to which Daly replies with a mix of anger and awkwardness, “That is just what a Bargradian sand warrior would say”. At this moment, Daly just behaves like a petty fan who can’t stand little bit of critique. On a broader note, he is just like all those psychopathic dictators who fancy themselves as the hero of the carefully calibrated narrative. In fact, in the end when he cackles maniacally and uses the word ‘Biblical’, Captain Daly pretty much comes off as a powerful villain. A truly unhinged fan can of course transform into villains of their own favorite TV show.

Black Mirror has repeatedly yet very imaginatively showcased how humanity will never stop from using the culture of technology to serve its darkest impulses. USS Callister is an apprehensible enlargement of the near-future fandom culture, whose self-absorbed dark fantasies can generate invisible pain and visible bleak consequences. Nevertheless, the episode serves as deconstruction of fan culture and not a call to entirely obliterate it. Its optimistic ending (uncharacteristic for Black Mirror episodes) asks the fandom take a broader view, instead of clinging to entitlement, prevalent within all of nerd culture. By the end, the new commander of USS Callister happens to be Nanette Cole, which isn’t adverting that women are the answer to toxic male-led fandom. It shows how one, regardless of gender, through understanding and empathy – values purported by any piece of pop culture – seek countless exciting adventures and escape purgatories (real or realistic-virtual ones). The absence of those values replaced with belief in rage and tyranny can only lead to entrapment like that of real & virtual Robert Daly. The true nightmare is not feeling powerless and isolated in the real world; it actually lies in remaining forever trapped in self-created nothingness, unable to exit from the silly virtual game.