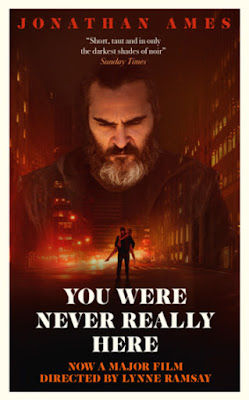 Scottish film-maker Lynn Ramsay’s works are often about broken people. Through the inner burden carried by these isolated damaged people, she tries to explore the underbelly of a debased society. Ramsay’s aesthetics are at once intimate, fragmentary, psychologically disturbing, and elegantly beautiful as she uses formal dexterity to turn her film into an original work. On the first look, Ramsay’s three feature films – Ratcatcher (1999), Morvern Callar (2002), and We Need to Talk about Kevin (2011) – seem like simple dramatic exercise on trauma. Yet her aural-visual trance-narratives combined with the narrow subjective field-of-vision turns the dramatic material into an immensely watchable poem of chaos and carnage. Ramsay’s new film You Were Never Really Here (2017), which received a standing ovation at last year’s Cannes (also won best screenplay and best actor award in its unfinished state), once again broods on the traumatic experiences of an emotionally repressed individual. However, unlike the female protagonists of the director’s last two films, the male protagonist here is a violent guy – a hit-man with certain codes of ethics.

Apart from Ratcatcher, Lynn Ramsay’s other two films are based on books. But what’s fascinating and idiosyncratic about her adaptations is that they aren’t straightforward filmic conversions. Ramsay is the kind of film-maker who involves herself from scripting process to casting to set-design. So she takes a book and essentially strips off the story’s elements to fit into her own vision. In retrospect, one could appreciate both the film and book versions, and entirely for different reasons. You Were Never Really Here (2017) is based upon Jonathan Ames’ novella ‘Bored to Death’. It tells the story of Joe (Joaquin Phoenix), a spooky lumbering figure. He’s a suicidal, middle-aged guy who is hinted to be a military vet stricken with PTSD. Joe lives with his elderly, ailing mother (Judith Roberts) in New York. This ghost of a man who haunts his own life actually works as a hit-man for a mysterious boss. When we first see Joe, his face is encased inside a plastic bag, a voice bidding him to ‘do better’ [Ramsay’s Ratcatcher also opened with the image of a boy suffocating himself, an obvious metaphor to reflect the characters’ emotional adversity]. There are no flashbacks to explain Joe’s post-traumatic stress in detail. What we get is few subliminal images – images erupting from Joe’s subconscious – that imply irreparable suffering in childhood and peeks into other atrocious things he has committed. 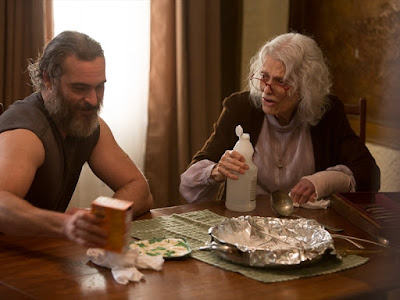 Following the ‘plastic-bag’ visuals, we see Joe in close-ups, cleaning up the things after finishing his brutal assignment. A bloody hammer is wiped off with toilet tissue, photographs are burned, and he slogs down the hotel’s hallway with his shoulders downcast bearing the figurative cross. Joe is dexterous when it comes to delivering violence, and he specializes in rescuing kidnapped or runaway children and returning them to their families. His new job involves a senator who wants to find and rescue his daughter Nina Votto (Ekaterina Samsonov) from a brothel full of underage girls. When Joe sets out to save the girl, the situation escalates and he is caught in broader conspiracy. Director Ramsay keeps the sense of violence floating in the air. Yet we don’t often see the brutal bloody acts; we only discover the shocking mess left in its wake.

Watching Joe moving through the streets in a car, absorbing its atmosphere of seediness, instantly reminds us of Travis Bickle, also about a military vet (Vietnam War) who sets out to rescue a teenage girl from the depths of human depravity. But Joe doesn’t carry out vigilante justice, and unlike Scorsese’s masterpiece, Ramsay’s vision is more intimate and narrow (focusing on the effects of violence on a individual’s psyche). The less talkative Joe shares most of his characteristics with lean, mean hit-men inhabiting Jean-Pierre Melville’s existential crime features. More than Taxi Driver (1976), this film bears the shades of John Boorman’s underappreciated classic Point Blank (1967), a touch of Steven Soderbergh’s cool crime yarn The Limey (1999), and stylistically attunes to Alice Winocour’s Disorder (2015) – also about a bulky ex-soldier (played by Matthias Schoenaerts) with PTSD. And, Joaquin Phoenix’s bewildering performance imbues the narrative with perfect emotional compass. Phoenix’s evocative gestures and eccentricity gives the character the kind of true haunting looks. Considering how the movie is narratively understated, it is important to note how Phoenix brings fine emotional thrust to the proceedings. The actor also instills Joe with innate decency that’s obvious in the sweet banter he carries with his ailing mother, which only later makes his raging inner battles more resonant. 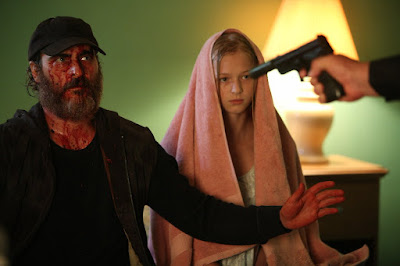 Despite all the influences derived and a masterful performance at the center, director/writer Ramsay’s minimalist yet meditative form and aural-visual textures deserves lot more accolades. Working with cinematographer Thomas Townsend, Ramsay provides us an emotional window to see through Joe's eyes as he navigates his quickly unraveling existence. And, on most occasions we are trapped with in Joe’s head-space that we 'feel' the bad things than actually 'see' it.  Sound designer Paul Davies and Johnny Greenwood’s score deserve special mention as they fill the quiet moments with sublime sounds and tones. Even though the director’s previous film is also about a murderous male, this time she adopts a more hard-edged male perspective. This one is a study of a physically strong man who finds himself to be fallible. He can’t truly save others, or at least save himself, and even falls short of killing himself. But the guy slowly grasps for life through the suffocating burden of trauma. This is expressed in a beautiful surrealistic moment as Joe swims up to the river’s surface. In fact, there are other intriguing moments in the film which makes it more than a remarkable exercise in style. For example, the way Ramsay undercuts brutality by adding unanticipated moment of tenderness: a gruesome face-off between Joe and a hired-gun ends on a strange note of singing, an incredible note of sensitivity and compassion amidst ruthless acts. The plotting does seem too lean and frustratingly fragmentary at times so as to wholly rely on the moments of startling ethereal imagery. Nevertheless, You Were Never Really Here (90 minutes) is a precious little mood piece which intimately studies a traumatized soul’s cracked psyche.

at April 18, 2018
Email ThisBlogThis!Share to TwitterShare to FacebookShare to Pinterest
Labels: 2017 Movies