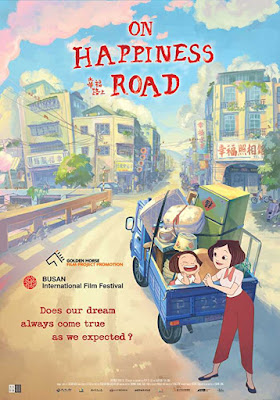 What could a simple, melancholic existence of a woman in a gentrifying urban community offer the modern viewers? ‘A soulful and richly layered film’ says Hsin-Yin Sung’s autobiographical animated family drama, On Happiness Road (‘Hsing fu lu shang’, 2018). On the outset, it seems to tell the familiar tale of an adult reflecting on the dreams of perfect life she once possessed (as a child and teenager), which only stayed a dream. The narrative is all about our young protagonist looking back at her bittersweet past and processing her muddled present to find answer to the question: What Next? But such roughly detailed plot-line wouldn’t do justice to this brilliant drama, which gracefully intertwines the personal with the political and social. The weight of parental expectations, the promise of overseas life, the disorientation & bitterness of modern adulthood, and existential malaise of educated urban women are all some of the other themes Hsin-Yin Sung tackles in her story. Most importantly, the hovering philosophical question of ‘What is Happiness?’ lies at the core of On Happiness Road.

When we first lay our eyes on adult Chi (voiced by actress Lun-mei Kwei) she is supposedly living a dream life. Born to working-class Taiwanese parents in 1975, Lin Shu-Chi has moved to US after education. She is now (in her early 30s) married to a blonde-haired American and living in a peaceful suburban neighborhood. Chi receives a phone call from Taiwan, informing that her beloved grandmother has passed away. She journeys back to her native land and in tidbits the narrative showcases Chi’s uncomplicated, happy childhood she had while living with her parents in a tiny apartment on the ‘Happiness Road’. At age 6 while traveling on a truck packed with furniture towards their new apartment, Chi questions her parents, ‘what’s happiness?’, the answer to which Chi is still searching. 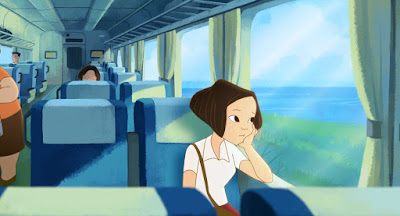 Beneath the sheen of her suburban American life lies heartbreak. Chi’s is estranged from her husband; the conflict over having a kid has driven them apart. Moreover, despite pursuing a university education she doesn’t have a career in America. Since the marriage is all but over Chi, after arriving for grandmother’s funeral, considers staying with her parents in the same ‘Happiness Road’ apartment. Once after reaching home, every little place in the ever-changing neighborhood triggers tons of childhood, adulthood memories: the friendships she had and lost; the ideological convictions and the dreams she cherished that were now laid to waste. The earthy, affectionate, betel-nuts chewing grandmother have always been a soothing presence in Chi’s life. Now gazing back at the vestiges of a sweet past, Chi feels the pressure of being at the crossroads. Adding further to her conflict is the indecision over telling her parents about the divorce procedures and her pregnancy. 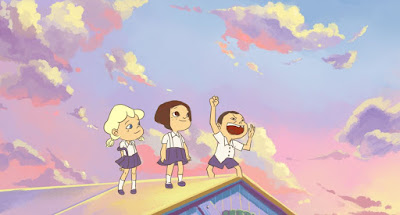 What makes On Happiness Road not just another exercise in nostalgia is writer/director Hsin-Yin Sung’s ability to relate the changes in Chi’s life with Taiwan’s contemporary politics and recent history. Chi is born on the eve of Chiang Kai-shek’s death, the Kuomintang (KMT) leader. And as Chi grows, events from the turbulent political period of Taiwan is constantly evoked. The struggles of 70 and 80s Taiwan to establish its national identity reflects in the social, political undercurrents which directly influences Chi’s choices in life. Some of those details are expressed in a matter-of-fact manner; for instance, Chi’s elementary teacher announcing monetary fines for anyone caught speaking the native Taiwanese dialect instead of Mandarin (which the authoritarian KMT government mandated). Although for a time Chi seems to succumb to her parents’ desires and prepares for medical course, the Taiwanese student protests for democratic reforms imparts a political consciousness within Chi so as to choose a different major. She protests against banning of books in pro-democracy demonstrations, and like all of our naïve younger-selves believes in the greater change to be harvested from the impending revolution. However, after witnessing major social and political events in Taiwan, the family’s economic status pushes Chi to commit herself to an office job (the mundanity of her life is depicted through the sadly poetic scenes).

Even without having a clear understanding of Taiwan’s recent history, Chi’s existential woe is universally relatable (hence it’s no surprise that the film found more success on international festival circuits than at local box-office). As always, the glowing promises of revolution and change only follows up with ‘economic miracles’ that demands conformity and to drool over the empty, materialistic life. The ennui and existential woe Chi feels in her 30s despite making it big in America is painfully familiar. In a way, On Happiness Road reminded me of two other spellbindingly nuanced animated dramas: Marjane Satrapi’s adaptation of her own graphic novel 'Persepolis' (2007)’ and Isao Takahata’s melancholic tale of an unmarried career woman in ‘Only Yesterday’ (1991). If Persepolis demonstrated a country’s societal, political oppression through the point-of-view of one family, Only Yesterday pays an endearing tribute to girlhood dreams and subtly lays out the realities and disappointments that impact a woman’s life. Similarly, Hsin-Yin Sung also sharply attunes to the ‘Personal Is Political’ argument. In fact, this is a heavy subject to tackle in a first film i.e., juggling between themes of women empowerment and fraught national identity. Director Hsin-Yin does all this with a sincerity and preciseness that never veers into outright melodrama. 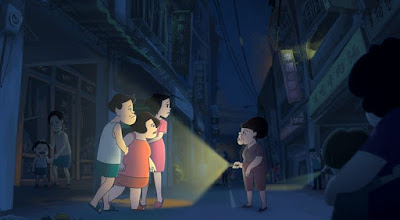 If I am pressed to find some issues with On Happiness Road, it solely belongs to the animated visuals. Unlike Studio Ghibli’s films or Marjane  Satrapi’s distinct aesthetics, Hsin-Yin’s pastel-colored world feels a bit limited and monotonous after a time (especially in the second-half). Of course, we could understand the budgetary constrains and the technical limitations since this is neither a major studio project nor made by a seasoned animator. Moreover, it’s a niggling issue when compared with Hsin-Yin Sung’s layered story-telling abilities. Altogether, On Happiness Road (111 minutes) is an engrossing, soulful tale of one lost woman finding the truth that the path to happiness starts within us.