David Lowery’s The Old Man & the Gun (2018) opens with a bank robbery, just after the title card mentions the following story to be ‘mostly true’. But guns aren’t shoved into faces, voices weren’t raised, staffs and other people don’t lie on the ground, impaired by mortal fear. The film is set in early 1980s (shot on 16mm, the grainy faded look gives the genuine 1980s American cinema feel) and what we see is an old gentleman calmly collecting some money from an even-tempered young bank teller. In fact, the robbery is clearly confirmed only by the police radio, which the elderly bank robber is listening to through what outwardly looks like a ‘hearing-aid’. Some sort of police chase ensues, but this one isn’t similar to the tense opening segments in Refn’s ‘Driver’ or Edgar Wright’s ‘Baby Driver’. The old guy just stops to help an old woman having trouble with her pick-up truck. Out of courtesy, hidden under the intention to evade the police, the bank-robbing gentleman Forrest Tucker (Robert Redford) gives lift to the independent-minded widow Jewel (Sissy Spacek) dropping her at a sprawling ranch, outside Dallas, Texas. In the narrative course, Forrest courts Jewel and a tentative bond is forged between them. And, yes the old guy keeps on robbing banks for fun, just flashing his Colt .45 but without ever indulging in violence (as one bank manager tells the police, “He was such a gentleman”).

Director Lowery’s third feature and first acclaimed drama ‘Ain’t Them Bodies Saints’ (2013) seemed like a chase-thriller, but ended up being a wistful, Malick-ian romance between a outlaw couple. His next film was a strong and cherished family entertainment Pete’s Dragon (2016). Lowery followed this up with an unbelievably great art-house feature A Ghost Story (2017). Casey Affleck, fresh from his Oscar-winning turn from Manchester by the Sea, played a white-sheeted ghost haunted by love and loss. Now Lowery takes a true story of a bank robber and shoe-horns it to be a fitting swan song to Robert Redford, while also indulging his nostalgia for the 70s celluloid warmth. The Old Man & the Gun is largely a soulful and cinematic homage to Robert Redford the star as Lowery administers his artistic tools to add an extra shine to the actor’s charm. Hence, the film could easily be an underwhelming experience for those who don’t dig into the sweetness of Redford tribute (there’s plethora of nods to the octogenarian actor’s cinematic past, which includes films like The Chase, Butch Cassidy and Sundance Kid, and The Sting). 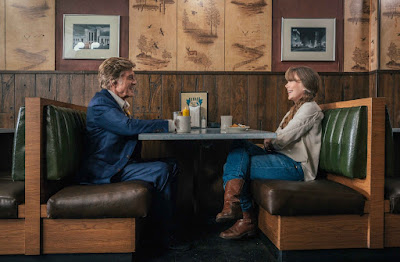 Written by David Lowery, The Old Man & the Gun is based on David Grann’s (Lost City of Z, Killers of the Flower Moon) New Yorker article about Forrest Tucker, a ‘charming’ career-criminal and escape artist, whose ‘Over-The-Hill Gang’ (comprised of two other older prison pals; played by Danny Glover and Tom Waits in the film) only in 1980 robbed as many as 60 banks. Tucker has escaped from prison at least 18 times and went on to commit his final robbery at the age of 79 in 1999 (he passed away in prison five years later). Convinced that his name should be in the ‘hall of fame’ of outlaws and robbers, Tucker himself wrote manuscripts, hoping that Hollywood would one day turn it into a movie. Lowery’s story is simply a playful take on Tucker’s criminal life without ever attempting to carefully approximate the gentleman robber’s life and quirks through Redford’s performance. In fact, writer/director Lowery extracts events from Tucker’s life so as to create a meta-textual layer that neatly reflects Robert Redford’s fifty-years-plus acting career. Not to mistake Lowery’s vision as a post-modernist take on a self-possessed robber, but it’s simply a sincere and old-fashioned portrait of the artist as a veteran robber. 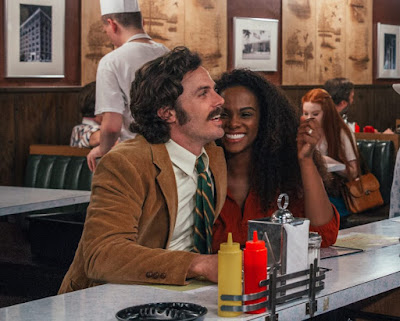 Lowery is comfortable with focusing on the subtle dramatics of the situation rather than frame it as a conventional ‘heist flick’ (one of the ‘Over-The-Hill’ gang’s biggest job happens off-screen). There’s absolutely no thrill in the robbery sequence. What interests Lowery is Tucker’s need to feel the thrill of being alive. This is marked by his sweet yet non-committal relationship with Jewel. The scenes between the iconic Redford and Spacek are clearly a lesson in on-screen chemistry as the pair exude affection and pathos that couldn’t be found in the entirety of modern rom-coms. Tucker also develops a sort of odd bond with his pursuer, a Dallas Detective named John Hunt (Casey Affleck). Hunt remains an unambitious cop but he suddenly becomes preoccupied with the mysterious, elusive robber. He is also partly captivated by Tucker’s singular talent and professionalism. Hunt’s warm family life (a beloved wife and two smart daughters) remains a clear contrast to Tucker who has an estranged daughter (Elisabeth Moss in a cameo) and has left a trail of agony and heartbreak. If Hunt’s eyes twinkles after bathing in his wife’s warm hug, for Tucker infectious smile naturally adorns his face once the stick-up is under way. Nevertheless, Lowery doesn’t make a clear-cut commentary on these characters’ masculinity, while highlighting Tucker’s preoccupations and nostalgic fancies as one-of-a-kind element which is not treated with pensive sadness but fondness.

At times, Lowery’s rigorous focus on the movie star, his brand of mischief and charisma, make the narrative course seem too lean and too relaxed. It’s also too muted for a character study as Forrest Tucker is mostly remains a symbolic figure and questions regarding his life and mindset are often dodged.  A heightened atmosphere of farewell illuminates the storytelling throughout (Lowery even conjures a setting to frame the star on the horse, echoing Redford’s status as old-school acting legend) and the director considers it satisfactory enough to leave it at that. The blunt psychologization, exploration of social or cultural milieus is just deemed extraneous. The real Forrest Tucker saw the gun he used in bank-robbery merely as an ‘essential’ prop. In The Old Man & the Gun (93 minutes), David Lowery uses Tucker’s life as a prop to devise a tribute to the 82-year old Robert Redford’s stardom (and may be like Forrest Tucker Mr. Redford wouldn’t call it quits?). It’s an easygoing, feel-good entertainment but wouldn’t be an unforgettable feature.

at January 08, 2019
Email ThisBlogThis!Share to TwitterShare to FacebookShare to Pinterest
Labels: 2018 Movies, Based on True Story, Hollywood Movies