Widows [2018] – An Aesthetically Pleasing Thriller Undone by the Lackluster Script 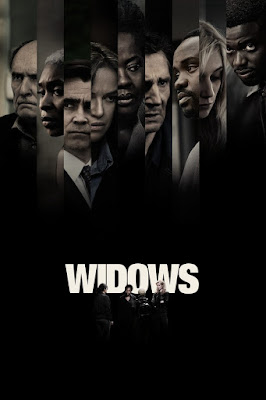 Widows marks stark departure for writer/director Steve McQueen, whose transition from crafting sublime artsier endeavors (Hunger, Shame & 12 Years A Slave) to a star-studded genre feature offers mixed results. ‘Widows’ does bear the film-maker’s intriguing aesthetic signature, right from the brilliant opening frames. Yet the austere beauty found in the visual presentation often gets lost due to an under-written script (which McQueen co-wrote with novelist Gillian Flynn) and under-developed characters. Perhaps the writing feels too rushed, inchoate, and incoherent because the film is based on Lynda La Plante’s acclaimed British 1983 miniseries of the same name. Naturally, the compression renders some scenarios and character sketches ludicrous. Having moved the action to Chicago, McQueen and Flynn tries to tell a very American story of race, disintegration and gender without forgetting to check off the ‘heist’ narrative essentials (although the social commentary falls flat at times or one could say it gets sacrificed in the altar of genre).

The very first scene in Widows cross-cuts between the romantic interlude involving Veronica Rawlins (Viola Davis) and her husband, Harry (Liam Neeson), and genuinely shocking deaths of a heist crew following a bungled getaway, in which Harry is part of. McQueen once again cuts to the elegant, white bedroom as the recently widowed Veronica feels the emptiness within her while touching the cold bed-sheets. This is a trademark McQueen sequence, which imbues tension and sets up the character’s emotionality through unique set of expository details. The grief-stricken yet the sturdy Veronica Rawlins is visited by Jamal Manning (Brian Tyree Henry), a crime lord looking to go legit by running alderman in a turbulent Chicago ward. Jamal claims that he was the target of her husband’s last job and demands two millions dollars, which supposedly went up in flames alongside Harry and his crew. 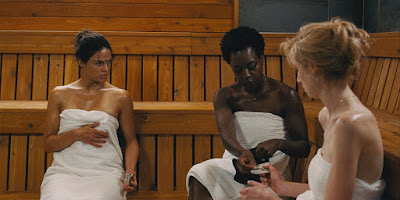 Jamal gives Veronica thirty days to pay back. Moreover, Jamal asks his brother/enforcer Jatemme (Daniel Kaluuya exuding bone-chilling intensity) to follow her movements. After finding one of her husband’s notebooks that provides details to his next heist, Veronica desperate to pay off the debt, plans to pull off the job. She visits the widows of Harry’s gang (Michelle Rodriguez and Elizabeth Debicki), who are all suffering under financial strain, with the proposition of ‘one last job’ to settle in life. Veronica’s plan is to steal five million dollars (as detailed in the plan), pay back the Mannings and live happily ever after with the rest. Of course, the widows being amateurs at this brings forth troubles and fate also keeps on throwing curve-balls at them. Veronica’s plans crosses path with the powerful local politician Jack Mulligan (Colin Farrell), who happens to be running for alderman against Jamal Manning. Jack is the scion of a local political dynasty, the alderman seat previously held by his mulish, racist father, Tom Mulligan (Robert Duvall). 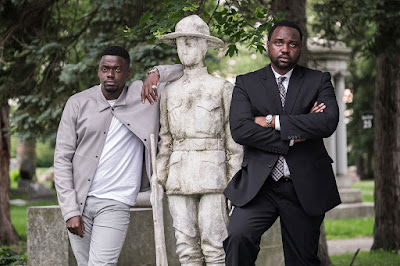 Steve McQueen’s visceral expression strives to mask some of the dull and preposterous plot-points. And some of those auterial touches easily overwhelms the nonsensical narrative textures. In one of the visually and thematically fascinating flourishes, McQueen follows Jack Mulligan traveling in his limo, who frustrated by the campaign event fulminates against the broken nature of the ward. Interestingly, the director frames this scene from outside the limo, the black-tinted windows hides the actors’ visage while only the audio is heard. The ‘show-don’t-tell’ approach neatly foregrounds the segregation, the limo in a matter of minutes moving from dilapidated streets to the neighborhood of million-dollar mansions, while Jack’s ironical rants goes on and on. Elsewhere, McQueen (and cinematographer Sean Bobbitt) puts mirror imagery to good use, which either serves as entryways to the past or allows characters to momentarily reflect on their circumstances. Some of McQueen’s visual precision serves to ratchet up the shocking quotient of a scene. For instance, the awkwardly included ‘police brutality’ sequence or when the central twist is revealed.

The relentlessly engaging aesthetic beauty does its best to carry the gravity of the subject matter and its social context. But the writing waddles between embracing the genre demands and exhibiting its weighty themes. Plenty of scenes and characterizations suffer from the hyper-contracted effort of squeezing TV series plot-points into a two-hour movie. The talented ensemble cast does their best to keep us engaged in the moment (actors like Debicki and Farrell steal the show despite their characters’ limitations). The cast also play well against each other, but the largeness of the material mostly reduces them to glorified props. It is frustrating to see how the big twist in the middle only serves to highlight the thematic preoccupation (an empowered women breaking free of sinister men) rather than affect the narrative flow whatsoever. For a popcorn movie, Widows is definitely good and complex. But it never comes close to greatness like McQueen’s previous efforts. Maybe, Mr. McQueen is aware of the criticisms that might follow his choice to take over this project. In one of the film’s earlier scene, Tom Mulligan refers to his son Jack’s pricey modern art as ‘$50,000 piece of wallpaper’. ‘It is art’ replies Jack, but his dad stubbornly repeats the word ‘wallpaper’. For me, Steve McQueen’s Widows (130 minutes) looks like a wallpaper with few artsy bits thrown in, although some might consider it a wonderful art with great depth.